Can Food Network Survive in the Age of Netflix Cooking Shows? 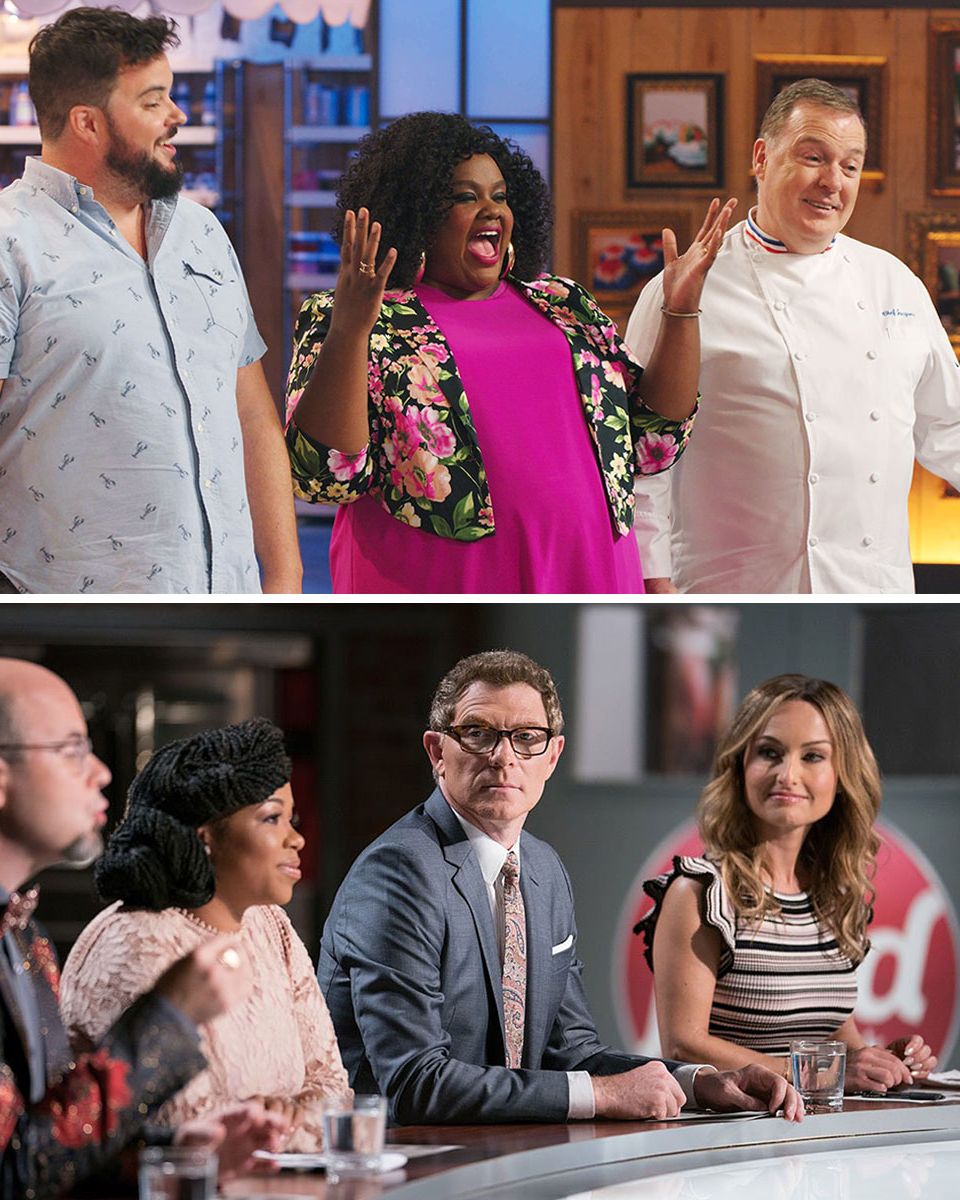 Judging panels on Netflix's Nailed It! and Food Network Star.

Bobby Flay and Giada De Laurentiis sat next to an empty chair. One at a time, contestants on Food Network Star came before them, ready to have their dishes critiqued — including by a mystery guest judge. That person, Bobby and Giada revealed, was the contestant, who’d have to judge themselves.

Food Network Star, which just completed its 14th season, once had network executives as judges, and its prize was an actual show on the channel. Season two’s winner, Guy Fieri, remains one of the network’s biggest talents. But that era is over. Since 2015, none of the winners have actually won their own show. Instead, they might appear as a guest judge on another show, like Fieri’s program Guy’s Grocery Games. So a challenge in which contestants judged their own performance was a perfect test for the prize the winner would most likely receive: a seat at a judging table at one of Food Network’s many prime-time competition reality shows.

Food Network still airs instructional shows like Giada at Home and Trisha’s Southern Kitchen during the daytime, but you’re more likely to find Cake Wars or Chopped marathons airing then. Food Network has mostly settled into a comfortable, familiar format: a competition with a celebrity chef as host, set in a studio, with contestants facing a time limit. Food Network Star, Guy’s Grocery Games, Worst Cooks in America, The Next Iron Chef, Beat Bobby Flay, and all of the Baking Championships are essentially the same show, packaged inside a slightly different twist or theme.

This strategy has become far more pronounced over the last few years, as Netflix has dished out a steady array of original reality food television: The gorgeously shot, fastidiously plated dishes on Emmy-nominated Chef’s Table; the zany and fourth-wall-shattering baking competition Nailed It!; David Chang’s deep dives into cuisine such as pizza, fried rice, and tacos on Ugly Delicious; and Michael Pollan’s exploration of food traditions on Cooked. Its most Food Network–like show is the pastry competition Sugar Rush.

Besides its originals, Netflix has imported the U.K.’s The Big Family Cooking Showdown and Australia’s Zumbo’s Just Desserts for American audiences; and it offers repeats of shows such as Anthony Bourdain’s Parts Unknown and The Mind of a Chef. It’s a wide range of food programming compared to Food Network, and that’s only going to increase with Netflix’s plans to launch 50 new unscripted shows this year.

Allen Salkin, who wrote a book about the cable channel’s history, says, “Food Network almost single-handedly created vast food knowledge in the general populace in America, and Food Network created a smart audience that wanted better food programming.” But, he adds, “at a critical juncture — which I would say was in the last five or ten years — they decided not to program for the audience that they created.”

As it’s doing with scripted shows, Netflix is offering creators and talent more — more creative freedom, and more resources. As a result, its distinctive shows stand out: Nailed It!, a show from the producers of Top Chef (which has been the premium chef-competition show since it debuted in 2006), cheekily mocks food competitions, in part by having its host, Nicole Byer, break the fourth wall. “I don’t really think it fits in anywhere. It’s really its own little beast,” Byer says. “I’ve never seen anything like it; I don’t think anyone else has, and I think that’s why people respond so warmly to it.”

James Beard Award–winning Salt, Fat, Acid, Heat author Samin Nosrat told me that her forthcoming Netflix series, based on her book, wouldn’t be possible elsewhere. “There was just endless energy toward making my dreams come true,” she says. “I get to imagine something that looks totally different and feels totally different. I really got to insist that we show home cooks versus restaurant cooks, that we have people who aren’t traditionally shown on food TV, a lot of women and people of color.”

Food Network’s shows are hosted and judged by talented chefs and successful restaurateurs, but critics of the network say that the shows’ formats don’t always play to the chefs’ strengths or expertise. As Salkin says, “If you’re having someone like Alton Brown, who knows a lot about food, preside over a circus, is that really credible food programming?”

Chopped is all about great cuisine, but it’s so fun to watch. If it was just a show about how to cook, nine people would watch it.

Yet the network’s strategy is definitely good business. Food Network has two magazines and a full line of products at Kohl’s, and was a key part of Discovery Communications’ acquisition of Scripps Networks, which owned Food Network and HGTV, among other networks. Kathleen Finch, who now oversees Food Network, Cooking Channel, and nine other Discovery networks as its chief lifestyle brands officer, is unapologetic about their goal to entertain a general audience. “Our job is not to teach people how to cook. Our job is to make people want to watch television,” she says. “When we find talent that works, when we find a format that works, the viewers tell us through ratings, and then we just keep making more of it.”

Food Network has “hundreds and hundreds of hours of premieres” each year, she points out. “For us, it’s all about ‘the audience knows when they want it’; we’re always there for them.”

For Netflix, the goal is to sell subscriptions, not ads, and it aims to do that via quantity and scale that will keep its subscribers well-fed. As Cindy Holland, Netflix’s VP of original content, told TV critics at the Television Critics Association press tour, “Our job is to provide enough variety so that 130 million members find content they love and come back to us every month and so that we can attract the next 130 million members and beyond.”

To fulfill that mission, Netflix may spend as much as $12 billion on programming this year, though producers who’ve pitched Netflix say the process is the same as trying to sell shows to cable or broadcast networks. Netflix executives don’t offer unlimited budgets, and they want programs that will appeal to their 2,000 or so “taste communities,” which are essentially audience categories — a more specific, data-driven version of the way cable networks target people of certain demographics, such as Food Network’s target of women ages 25 to 54.

Netflix, which would not make an executive available for this story, doesn’t release ratings, so we don’t know how many people its food shows actually reach. Renewals of shows like Chef’s Table, though, indicate that they’re performing well enough to justify their costs — perhaps because critical acclaim and award nominations help bring attention to them, too. Would a show like Chef’s Table, with its quiet, meditative approach, even work on ad-supported cable, where it would need more than a niche foodie audience to survive?

Salkin wishes that Food Network would at least try. He points out “how rare it is that Food Network takes a gamble,” and says that if the network tried new shows and “fails, and then it doesn’t get ratings, okay, fine, I’ll give them a pass.” But, he says, the “ever-present ethos of Food Network of going for the lowest common denominator and refusing to spend real money on a show is keeping them in the gutter of food programming, rather than elevating them to where Netflix has shown the format can go.”

Discovery’s Finch says her priority with Food Network is clear. “My single-focus job is to bring as many people under the tent as possible, and we do that by making our shows entertaining. Chopped is all about great cuisine, but it’s so fun to watch. If it was just a show about how to cook, nine people would watch it,” she says. “I’m not in the food business. I’m in the television business.”

+Comments Leave a Comment
Can Food Network Survive in the Age of Netflix Cooking?

rip Yesterday at 12:45 p.m.
Alain Sailhac, a Chef’s Chef to the End, Has Died “He knew it all.”
reasons to love new york Yesterday at 8:00 a.m.
The Best Pizza in the World Can Be Found in One Square Mile of Williamsburg Any neighborhood would be lucky to have even one or two of these places. Here are eight.
reasons to love new york Yesterday at 8:00 a.m.
Margaritaville Is the Chillest, Cheesiest Place in Town It’s bright, cacophonous fun.
By Rebecca Alter
reasons to love new york Yesterday at 8:00 a.m.
We Will Wait a Very Long Time for a Suprême The latest and arguably greatest entry in New York’s croissant craze.
the grub street diet Dec. 2, 2022
Andy Baraghani Likes Some Lumps in His Potatoes “This recipe has three kinds of dairy — labneh, cream, and butter — which I don’t think is overkill.”
By Alan Sytsma
the year i ate new york Dec. 1, 2022
Chocolate and Cheese in the Bronx A post-Thanksgiving trip to Chocobar Cortes.
By Tammie Teclemariam
report Dec. 1, 2022
How New Yorkers Are Saving, Swapping, and Splurging on Groceries “You gotta close your eyes and put it in the cart.”
By Paula Aceves and Jane Starr Drinkard
moving Nov. 30, 2022
The Famously Tiny I Sodi Is Moving to Bigger Digs Rita Sodi’s beloved little dining room will move — and finally get a bit bigger.
openings Nov. 29, 2022
The Many Influences of Kwame Onwuachi The chef puts his own history on the menu at Tatiana.
By Tiffany Martinbrough
best in class Nov. 28, 2022
11 of the Very Best Air Fryers Custard toast at the ready.
feature Nov. 28, 2022
This Tasting Menu Tastes Like Pot A cross-country dive into high-flying, super-high dollar cannabis cuisine.
By Adam Platt
emergency discussion Nov. 22, 2022
The Menu Gets That Fine Dining Is a Cult Obscure location, insufferable clientele, and staff at the end of their rope — this horror-comedy’s got a lot in common with reality.
By Chris Crowley and Adam Platt
holiday gifts 2022 Nov. 21, 2022
The Best Gifts for Beer Lovers, According to Brewers and Beer Lovers Because you can do better than a novelty beer helmet.
profile Nov. 21, 2022
Scarr’s Pizza Is Expanding — and Adding a Sushi Counter How Scarr Pimentel became Orchard Street royalty.
By Tammie Teclemariam
the grub street diet Nov. 18, 2022
Jeremiah Moss Wishes Arturo’s Would Open Earlier “I feel like I’m betraying myself somehow when I eat nice food.”
By Alan Sytsma
the year i ate new york Nov. 17, 2022
Where to Watch the World Cup Our diner-at-large goes looking for that perfect 5 a.m. sports bar.
By Tammie Teclemariam
closings Nov. 15, 2022
Good-bye to Pearl, the Oyster Bar That Launched a Million Lobster Rolls “A perfect storm” of calamities led to the restaurant’s closing, according to owner Rebecca Charles.
By Steve Garbarino
openings Nov. 14, 2022
The Race to Finish Rockefeller Center’s Restaurants A handful of ambitious new spots are all vying for the attention of, well, everyone.
By Chris Crowley
the grub street diet Nov. 11, 2022
Margo Price Stops for Tacos in Texas and Katz’s in New York “Tonight we might get stoned and go eat a hot dog.”
By Alan Sytsma
the year i ate new york Nov. 10, 2022
Detours and Seafood in Jackson Heights What to do when a food pilgrimage doesn’t go as planned.
By Tammie Teclemariam
More Stories