After this post originally ran, the family that owns Gargiulo’s announced that it would cancel the event.

A well-regarded Coney Island seafood restaurant is planning to host an event that has made it the target of heated criticism. Century-old Gargiulo’s says that on April 12, it will hold a dinner for the Brooklyn Friends of the NRA, the group’s annual fundraiser. Per the flyer, it’s the group’s second-ever such event, intended to provide gun fans a chance to “join other champions of the Second Amendment for dinner, raffles, auctions, and fun.”

Dinner tickets cost $75 apiece, and there will also be gun raffles. Some attendees will walk home with a handgun, a revolver, a .22, a special “women’s rifle,” a shotgun, a John Wayne Lil ’ Duke air rifle, “and more!” As the flyer explains, special $50 raffle tickets will allow guests to potentially win a knife set plus a .45 with a “Defending Freedom” engraving, and $1,000 will get ten dinner tickets and ten entries into the “black gun” raffle. 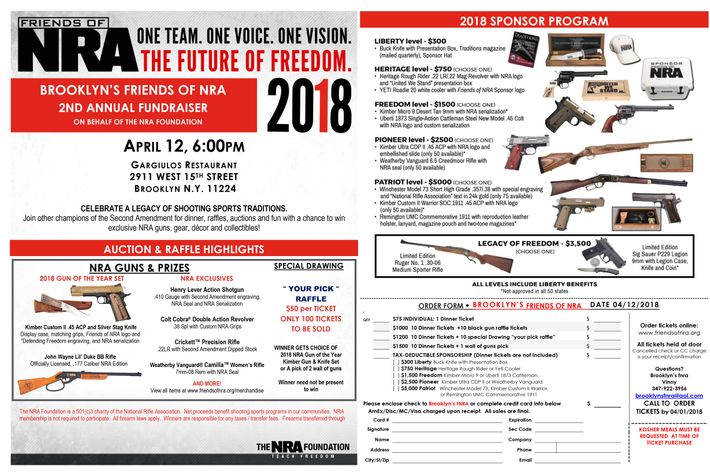 Elected officials are already trying to stop the event. A joint statement signed by State Senator Diane Savino, Congressman Hakeem Jeffries, Public Advocate Letitia James, Comptroller Scott Stringer, and Councilman Mark Treyger says: “At a time when our country is mourning the loss of 17 lives in a mass shooting, it is profoundly disappointing that a storied Coney Island institution, with a long history of being a strong civic and community partner, is choosing to host a National Rifle Association fund-raising event that includes raffle giveaways of guns.” The statement goes on to call the situation an “affront” to allow this sort of event to take place in a Brooklyn neighborhood with such a dark history of gun violence.

rsvp 9:55 a.m.
How Shyan Zakeri Created the City’s New Must-Have Burger Shy’s Burgers is not your usual pop-up.
By Margaret Rhodes
best in class Sept. 23, 2022
15 of the Very Best Water Bottles Always be hydrating.
By Emma Wartzman
are u coming? Sept. 23, 2022
Richie Akiva Is No Longer the King of Nightclubs, Okay? His post-pandemic move: a celebrity-packed … members-only club.
By Brock Colyar
the grub street diet Sept. 23, 2022
Bobby Finger Is Excited to Eat Indoors Again “Put me as close to people as possible. Put me at the bar. Put me behind the bar.”
By Rachel Sugar
openings Sept. 22, 2022
Eisenberg’s Enters Its A24 Era The name is new, the counter is old, and a Safdie brother is now involved.
By Jason Diamond
the year i ate new york Sept. 21, 2022
Who Are All These People Eating on DeKalb? It might be the most confusingly busy restaurant stretch in the city.
By Tammie Teclemariam
openings Sept. 20, 2022
At Pecking House, the Line Is Finally Manageable You don’t have to wait for New York’s hottest fried chicken anymore.
By Chris Crowley
openings Sept. 19, 2022
Urban Hawker Brings Singapore to Midtown Inside the new food hall, which features 11 vendors from the island nation.
By Mahira Rivers
best in class Sept. 16, 2022
11 of the Very Best Air Fryers Custard toast at the ready.
the grub street diet Sept. 16, 2022
Karen Chee Is Looking Forward to Her Morning Egg “Peeling the shell is like unwrapping a gift.”
By Rachel Sugar
the year i ate new york Sept. 15, 2022
What’s Wrong With Cocktails Right Now? Bartenders and drinkers both seem a bit bored.
By Tammie Teclemariam
rip Sept. 14, 2022
RIP to the Wine Genius Who Created Two-Buck Chuck Fred Franzia had a way with words too.
gifts they might actually want Sept. 14, 2022
The Best Gifts for Beer Lovers, According to Brewers and Beer Lovers Because you can do better than a novelty beer helmet.
openings Sept. 14, 2022
A Le Coucou Chef Has Taken Over at Manhatta Justin Bogle breaks down the technique on a dozen new dishes.
By Joshua David Stein
report Sept. 12, 2022
Why Have Restaurant Menus Gotten So Simple? Call it the great pare-down.
By Chris Crowley
the grub street diet Sept. 9, 2022
Emma Steiger Eats Dinner at 3:30 — and Again at 10:45 “Even when we ordered, we knew it was too much food.”
By Alan Sytsma
reopening Sept. 8, 2022
Great N.Y. Noodletown Makes Its Triumphant Return A long-delayed reopening has finally happened.
By Chris Crowley
rsvp Sept. 7, 2022
What It’s Really Like Inside a Blindfolded Dinner “The customer is really surrendering to the chef — it’s a lot of trust.”
By Megan Paetzhold
cooking Sept. 6, 2022
The Dinner Party Is Over No more cleaning up.
By Emily Sundberg
the grub street diet Sept. 2, 2022
Galen Druke Has Been Getting Into Protein Shakes “This is probably the most embarrassing part of my diet I’ll admit to, so I might as well get it out of the way up front.”
By Zach Schiffman
More Stories