The viral sensation arrives in New York and sprinkles some digital fairy dust on our critic’s Instagram feed. 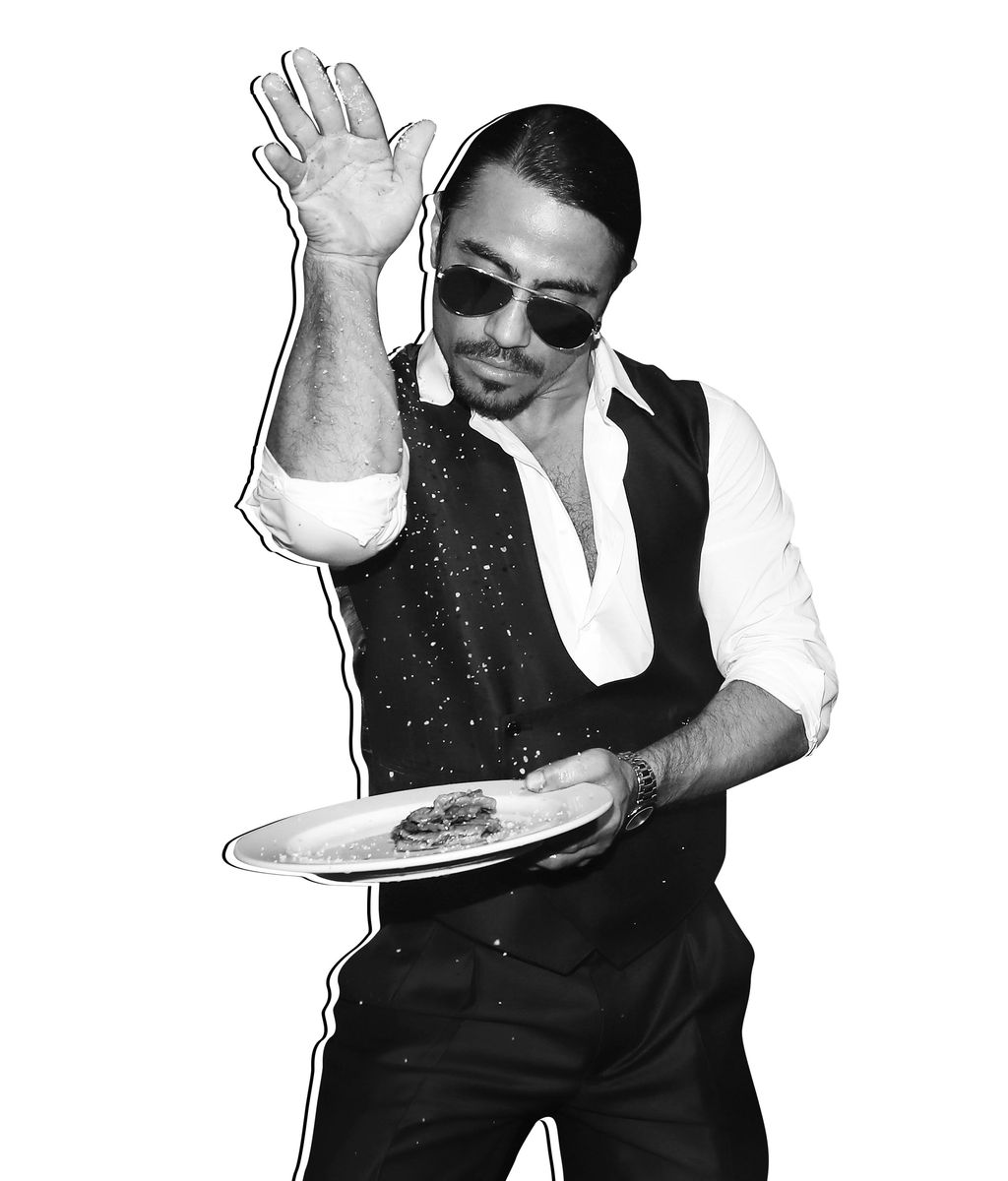 The sharklike shiver of critics who inhabit the treacherous waters around this ancient restaurant city is notoriously hard on out-of-towners, although we usually tend to let our prey flail around for weeks, months, or sometimes even years. But the Turkish meat-salting meme sensation, Nusret Gökçe — a.k.a. Salt Bae — is no normal out-of-town chef, and the New York branch of his Nusr-Et Steakhouse empire (now more than a dozen global restaurants) was open for just one proverbial New York minute before the sharks went in for the kill.

They were merciless: The bone-in rib eye was “shoe-leather-tough” (parts of it are, it’s true), and at $275 per slab, an egregious ripoff (if you’re talking just steak, you’ll get no argument here). Those asking for tap water were instead offered pricey bottles of Voss (that happened to me), and a week or two into the run, it was breathlessly reported that the diminutive chef was in violation of local health codes when he went through his fabled, meat-slicing routine using his bare hands (he wears black rubber ninja gloves now).

If you think this kind of frantic feeding frenzy happens every day, think again. I was even getting aggressively negative messages from friends who had nothing to do with the food world — weeks before the place opened. (“This sounds like negative-ten stars, Platty!”)

When I finally lumbered up to the large, boisterous, former China Grill space on 53rd street for my de rigueur Salt Bae experience, it was less as a high-minded restaurant critic (what kind of self-respecting member of the shark school reviews a place after it’s been open for ten days?), and more as a jaded citizen of the digital universe, half hoping to catch a glimpse of the living meme while at the same time witnessing (and yes, maybe recording) a high-minded gastronomic train wreck.

My dining partner was a longtime connoisseur of such events, and we happily noted our suitably horrible table between the wall and a herd of stampeding waitstaff, many of them wearing jaunty black jockey caps. The cheesy, slapdash decorations — fluorescent meat hooks hanging from the rafters, tired-looking potted plants, random chunks of Himalayan rock salt lining the walls — didn’t make us any more optimistic about the meal to come.

As the largest, most fearsome member of our local shark fraternity noted on his own lightning-round visit to Nusr-Et, however, the Godzilla-like majesty of the Salt Bae phenomenon tends to obscure Gökçe’s obvious talents as a salesman and hardworking restaurateur. The merry, cap-wearing waitstaff that swooped down on our table bearing bottles of $9 Voss water were as well-trained at the art of genial upselling as the practiced salesmen in ancient tourist bazaars. After negotiating our way down from a $100 platter of strip-steak “spaghetti” to the $70 milk- and onion-marinated Turkish meat delicacy called “lokum,” we hailed a passing dim sum–style steak-tartare cart, and were disappointed to find that the tartare was a bit of a mess (there’s ketchup), although the quality of the beef was surprisingly good. The lokum turned out to be equally tender, and properly milky, and when the stoic, ninja-gloved meme himself appeared IRL, noiselessly and on cue, to carve up our $275 Salt Bae tomahawk chop, we stared at him for a brief second, in quiet wonder, before grasping for our phones.

The real-life Salt Bae experience — the T-shirt, the round robot glasses, the blank, trancelike expression — turns out to be uncannily like the digital version, which is part of its genius, of course. “The whole world’s here, Platty,” said my friend in tones of slightly surprised wonder, as we hastily edited our own memes in the increasingly boisterous room, and sent them off into the digital ether, to be liked and viewed, and hopefully replicated again and again.

Did I pay much attention to the chalky quality of my mashed potatoes after the star of this strange show moved on to sprinkle his digital fairy dust over the next table, and the table after that? Did I complain bitterly about the tomahawk, which, when compared to Manhattan’s other, more robust versions of this already ridiculously hyped dish, was a little puny and roughly 100 percent overpriced? Not really — why would I? As other critics have pointed out, Nusr-Et is more of a theatrical happening than a real restaurant, and like it or not, we are all part of the show. After we’d called for the extravagant check ($745 for two, for the record, including a hefty service charge), we stopped, as if in a trance, to record the bartender, who was pouring the contents of his frosty shaker into a glass balanced on his elbow. As an afterthought, I posted this comical circus image while I was heading home in a cab, with a pithy, one-sentence review.

Within a day or two, the circus image was a mini-meme of its own, with several thousand more views than anything else posted randomly on Olde Platty’s sporadic Instagram feed. The reposts, by @grubstreet and @nymag, have many thousand more, too. Are these refracted bits of Salt Bae alchemy worth the hefty price of a mediocre dinner, or even just the 20 or so bucks you’d spend on a drink at Nusr-Et New York City? My click-hungry editors will offer a hearty “yes and thank you” to that, and after some reflection, your grumpy critic will, too.