It appears that a Starbucks employee has leaked the cups that the coffee chain plans to use for the upcoming holiday season. (Yes, mid-October is far too early to mail those suckers out, but really, what were you expecting?) A pic posted to Reddit by a user named DarthSpoopy shows a stack of the chain’s short-size cups, and Starbucks-cup hecklers will be pleased to see that they have a definite Christmas-ness to them. 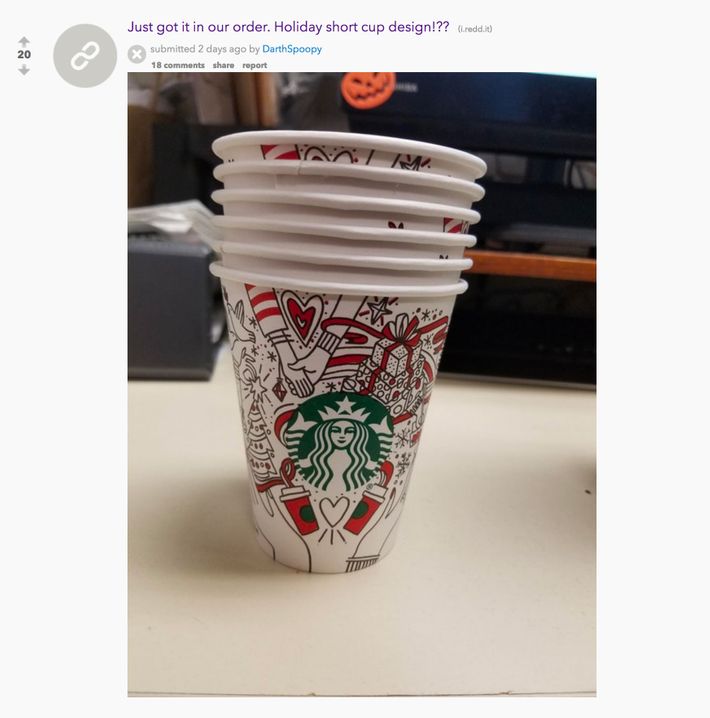 The design looks vaguely Seussian, and who doesn’t love Dr. Seuss? Inevitably, someone’s going to complain. You’ll no doubt recall customers’ War on Christmases Past. In 2015, Starbucks tried something new: a red ombré cup with no conspicuous tinsel, snowflakes, fir trees, jolly Santas, or trumpeting angels. They were promptly accused of “hating Jesus.” People actually boycotted Starbucks over this. Starbucks called it a “blank canvas” that customers could personalize however they wanted, but nevertheless capitulated somewhat last year by rolling out 13 very festive cups. Capitulated “somewhat” because it crowdsourced their designs, and settled on ones by 13 different women, six of whom weren’t American.

Odds are, Starbucks has more designs up its sleeve (it almost never releases a single cup), but if they’re all like the one above, maybe 2017 will finally be the year everyone orders their Peppermint Mochas in generically Christmassy cups like adults, and goes merrily on their way.