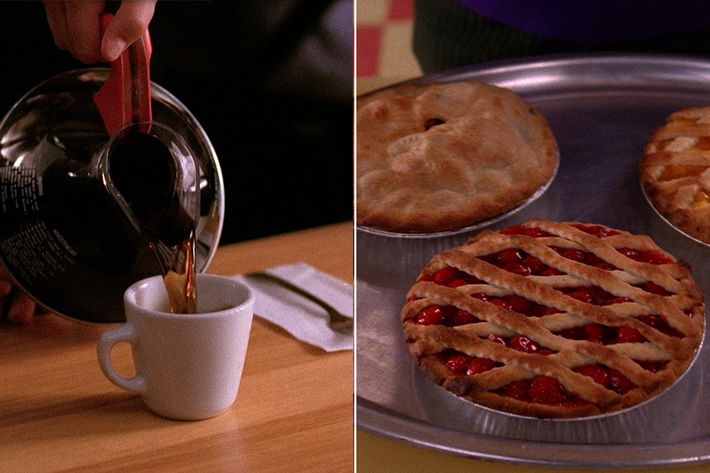 The new Twin Peaks is nearly upon us – the limited event series of the ’90s cult classic premieres on SHOWTIME on May 21 at 9 p.m. To celebrate, we’re bringing some of the iconic eats that stud the series to New Yorkers by way of a food truck. On Friday, May 19, we’ll be serving up free cherry pie and damn good coffee to wash it down.

You won’t want to miss out on the Twin Peaks food truck (although it’ll be hard to — you’ll be able to spot its Black Lodge-esque zig-zags from blocks away), so here’s exactly when and where you can find it throughout the day:

In the meantime, take a trip down Twin Peaks memory lane by reliving some of the series’ most memorable food scenes.

“Black as Midnight on a Moonless Night”

Special Agent Cooper arrives in Twin Peaks to investigate the murder of Laura Palmer. In episode two, he grabs breakfast at the Great Northern Hotel, his home base for the duration of his stay. He’s positively delighted by the sheer quality of their cup of joe, although this is just one of the many scenes in Twin Peaks that celebrates coffee.

Later in this same scene, Cooper goes on to order breakfast with very specific instructions: “I’d like two eggs over hard. It’s hard on the arteries, but old habits die hard. Just about as hard as I want those eggs. Bacon, super-crispy. Almost burned. Cremated. That’s great. And, I’ll have the grapefruit juice, just as long as those grapefruits … are freshly squeezed.”

The pause after “grapefruits,” of course, is when Coop first spots teen seductress Audrey Horne.

“Where Pies Go When They Die”

Ah, the wholesome Double R Diner, a sort of unofficial Twin Peaks town gathering place. If you’re looking for someone, you’re likely to find them cozied up to the counter chatting with Shelly or Norma, or enjoying some solitude in a booth. The Double R makes a particularly mean cherry pie. In fact, Cooper describes the eatery as “where pies go when they die.”

Baguette With Brie and Butter

Jerry Horn, the manic brother of scheming Ben Horne, makes his first appearance in the series when he storms into Ben’s dining room, interrupting what looks like a painstakingly prepared sit-down family meal. Jerry, who had just returned from France, sings the praises of brie and butter sandwiches and hands one to Ben. Ben turns up his nose at the family dinner to bite into the sandwich – which he thoroughly enjoys.

Lucy the receptionist keeps the Twin Peaks Sheriff Department positively festooned with intricately arranged doughnuts. Be sure to avoid the “jelly” doughnuts at the crime scene of poor Waldo the myna bird’s murder.

This is paid content produced for an advertiser by New York Brand Studio. The editorial staff of Grub Street did not play a role in its creation.

How a Restaurant Leaves New York
How a Restaurant Leaves New York
All closings »
the grub street diet 6:00 a.m.
Ziwe Loves to Combine Sweet and Savory “I was like, ‘Oh, these guys have meat with everything — let me get on that wave right quick.’”
food media Yesterday at 11:24 a.m.
Three Bon Appétit Stars Have Officially Exited Test Kitchen Priya Krishna, Sohla El-Waylly, and Rick Martinez will no longer appear in the brand’s popular videos.
shopping Yesterday at 9:45 a.m.
The Joy of Sourcing I craved adventure. I found preserved lemons.
trailer mix 8/5/2020 at 3:55 p.m.
Let the Trailer for Selena Gomez’s Cooking Show Simmer in Your Sauté Pan You can devour it next month on HBO Max.
closings 8/5/2020 at 11:05 a.m.
How a Restaurant Leaves New York For three months, I lived my dream. Then COVID-19 arrived.
100-person poll 8/5/2020 at 8:00 a.m.
100 New Yorkers on the New Rules of Outdoor Drinking  On a recent Saturday, we asked 100 people at Brooklyn’s McCarren Park about porta-potties, open container laws, and other 2020 etiquette.
underground gourmet quick bite 8/4/2020 at 10:00 a.m.
A New Sandwich Shop Wants to Rehabilitate the Chicken Cutlet Hero “The fast-casual category populated by brands like Sweetgreen, Dig Inn, and Dos Toros hasn’t been heroized yet.”
taste test 8/4/2020 at 8:30 a.m.
Which Negroni To Go Is Right for You? The Underground Gourmet taste-tests a representative sampling from our Campari-drenched delivery zone.
reversals 8/3/2020 at 2:06 p.m.
Trader Joe’s Won’t Actually Change Its ‘Racist’ Product Names The grocer released a new statement contradicting its first response to an online petition criticizing branding like Trader Ming’s.
sexual harassment 8/3/2020 at 11:53 a.m.
We (Still) Need to Talk About Abuse in Restaurants As businesses reopen, we must discuss the industry’s pervasive sexism and rampant harassment.
mixology 8/3/2020 at 10:00 a.m.
Dale DeGroff Is Optimistic About the Future of Bars A new book and some old stories from the man who brought us drinks as we know them.
underground gourmet quick bite 8/3/2020 at 8:00 a.m.
To Placate Cuomo, Botanica Bar Adds Sourdough Pizza to Its Menu For years, the dive bar’s customers got by on peanuts.
the grub street diet 7/31/2020 at 6:00 a.m.
Author Molly Wizenberg Loves the Thrill of a Backyard Garden “Our first green bean had appeared, and there I was, squatting down in my bathrobe in the dark.”
explainers 7/30/2020 at 1:40 p.m.
What Is Going on With Trump’s Pizza Tweet? A very quick explainer.
closings 7/30/2020 at 12:25 p.m.
Keith McNally Is Closing Another Restaurant Au revoir, Augustine.
becoming a regular 7/30/2020 at 12:02 p.m.
Would You Subscribe to a Restaurant? A bold proposal to rethink the way we pay for food — and it comes from Panera?
interviews 7/29/2020 at 1:45 p.m.
Can the No-Tipping Movement Survive? Tip-free restaurants are more equitable and better for customers, but they’re in danger of disappearing.
crime scenes 7/29/2020 at 11:12 a.m.
What We Now Know About the Trader Joe’s Anti-Mask Assault One employee was sent to the hospital, according to someone who witnessed the attack.
coronavirus 7/28/2020 at 11:50 a.m.
What Is Local Law 1932-A, and Why Are Restaurant Owners So Worried About It? “It would be a fatal blow to the restaurant industry.”
closings 7/28/2020 at 10:47 a.m.
It’s a Hub for Indonesian Culture in New York. Next Week It Will Be Gone. The city will be a less eclectic place when Bali Kitchen closes its doors.