Wise Foods, the potato-chip-maker that’s probably option C during your bodega run, has been sued by two people who claim the brand is tricking consumers into buying mostly bags of air. According to their suit, Wise intentionally and systematically underfills its bags, leaving them anywhere from 58 percent to 75 percent empty. As proof, the filing includes results from a home science experiment, where the plaintiffs photographed various bags next to a ruler, adding a colored mark to show where the fill line hits inside the bag.

On a foot-tall bag of sour-cream-and-onion Ridgies, you can see it stops just shy of the three-inch mark: 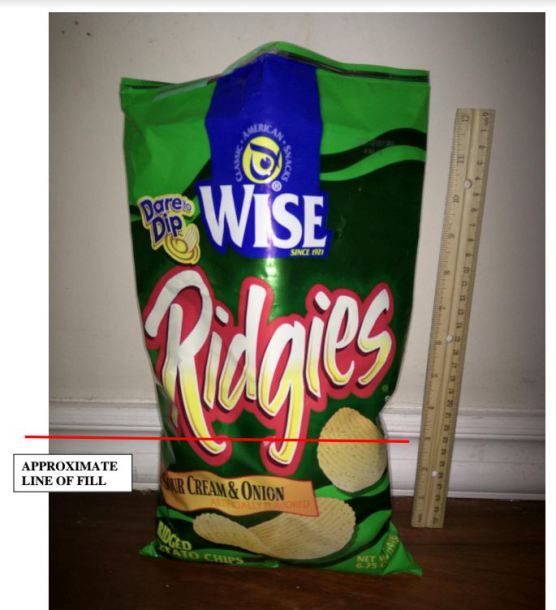 “Slack-fill” is the industry term for the space intentionally filled with air to protect contents from getting crushed, but the FDA has been onto companies’ liberal interpretation of the term for a while. It lays out six reasons they can use slack-fill in product packaging, and the two plaintiffs — Sameline Alce and Desiré Nugent — argue none apply to Wise’s chips. They believe nobody would pay retail price for Wise’s bags if the amount of empty space was apparent. They also grant that bags aren’t labeled inaccurately by weight, but claim that’s immaterial because no lay shopper has any idea what “2.75 ounces” or whatever of chips means. “Even if defendant’s net weight disclosures are accurate, such does not eliminate this basic deception,” the complaint says.

As it happens, people have been complaining to Wise about underfilled bags for years, usually as much out of wonderment as anger (it’s just a few ounces of chips, after all):

@Wise__Chips opened my snack size of BBq chips and this is all I got. 5 chips.... Seriously pic.twitter.com/pvuz2hAlxN

this better be some good air you're selling pic.twitter.com/QZOgWJAzGE

What the heck, I crack open a new bag and there's like 2 chips! #Wise pic.twitter.com/fCXYfu4SzZ

No picture can do justice to how little the ammount of chips that are in this bag. #wise #chips #snack SHAME ON YOU. pic.twitter.com/x9MJND5

The proposed class-action suit seeks damages for people who bought Wise chips in New York City and Washington, D.C., and also demands the company fix packaging to eliminate the “nonfunctional slack-fill.” Adding insult to injury, it notes bags of Frito-Lay’s Ruffles — the brand Wise’s Ridgies tries to copy — are filled much higher.

the year i ate new york Yesterday at 9:05 a.m.
Should New Yorkers Actually Go to the Seaport? Checking in on Jean-Georges Vongerichten’s new megamarket, the Tin Building.
By Tammie Teclemariam
drinks Aug. 17, 2022
I Regret to Inform You There Will Be No ‘Drink of the Summer’ Dirty Shirley, we hardly knew you.
By Chris Crowley
chains Aug. 16, 2022
We Found a Long-Lost Taco Bell Burrito Hiding Way South of the Border Finding seven layers of heaven in Santiago, Chile.
openings Aug. 15, 2022
Hakata TonTon Is Back Hot pot, cold ramen, and plenty of pig.
By Chris Crowley
pop-ups Aug. 12, 2022
A Queer Food Festival Is Happening in Queens Tomorrow Queer Cafeteria is popping up at Socrates Sculpture Park.
the grub street diet Aug. 12, 2022
L Morgan Lee Searches for the Joy in Dinner “I had my first bite and felt my spirit start to stir.”
By Zach Schiffman
meow Aug. 11, 2022
We Ate at the Fancy Feast Restaurant for Humans Yes, the fancy cat was there.
By Choire Sicha
the year i ate new york Aug. 10, 2022
Can New York’s Hotels Make Breakfast Important Again? Our late-rising diner-at-large gets up for some new spreads.
By Tammie Teclemariam
closings Aug. 9, 2022
Arrivederci to Nunzio’s, an Unsung Staten Island Slice Mecca After 80 years in business, the pizzeria is set to become a cabinet showroom.
By Chris Crowley
what to eat Aug. 8, 2022
Meet Brooklyn’s Newest Vegan Meatball Hero Garden Carver specializes in meat-free versions of beloved comfort foods.
By Megan Paetzhold
the grub street diet Aug. 5, 2022
Filmmaker Rebeca Huntt Is Serious About Breakfast “I made my oatmeal pancakes and watched Before Sunrise.”
By Alan Sytsma
the year i ate new york Aug. 4, 2022
Not All Culinary Journeys Can End in Success Sometimes you travel for a dish with a perfect online rating — and then you have to take your L in stride.
By Tammie Teclemariam
what to eat Aug. 3, 2022
How to Engineer a Clam Slice In a stunning bit of pizza innovation, F&F offers the New Haven specialty one piece at a time.
By Chris Crowley
reopenings Aug. 2, 2022
Txikito Is Back — Finally The neighborhood favorite is set to reopen after two-plus years of darkness.
By Charlotte Druckman
food tv Aug. 1, 2022
Everyone’s Thirsty for The Bear. Here’s What It’s Really Like to Date a Chef. “We all get into this line of work because we have personality disorders and massive daddy issues.”
By Nastassia Lopez
the grub street diet July 29, 2022
Sarah Thankam Mathews Eats Lychees on the Beach “I feel a happiness so intense and sudden it leaves me gelatinous.”
By Rima Parikh
openings July 28, 2022
He Has 11 Million TikTok Followers. Now He’s Throwing Ice Cream in Noho. “If you walk in and there is ice cream flying around in the air? It automatically sends the energy level up.”
By Ella Quittner
the year i ate new york July 28, 2022
Swimming With the Regulars at Marea An extravagant weeknight meal where everyone seems to know each other.
By Tammie Teclemariam
are u coming? July 27, 2022
A Tea-Spilling Lawsuit Upends a Hell’s Kitchen Gay Club Just how woke can a megaclub hosting underwear parties really ever be?
By Brock Colyar
field notes July 27, 2022
A Final Trip to Papaya King on the Eve of Its Likely Destruction The iconic hot-dog counter’s days appear numbered.
By Adam Platt
More Stories