Congee, also known as jook, or rice gruel, has long been the breakfast of billions in China — filling, cheap, energizing, and easily digestible, fit for infants and nonagenarians alike. Some swear by it as a post-exercise pick-me-up; others as a superb hangover cure. Its soothing properties are considered so powerful that congee is even served at funerals. In its most basic form, it’s white rice cooked in water or broth until the grains disintegrate, seasoned with everything from preserved eggs to pig’s blood. Part comfort food, part blank canvas, it’s gone beyond its traditional Cantonese Chinatown setting to approximate a cornstarch slurry in Mission Chinese Food’s Westlake Rice Porridge, and to turn a popular Vietnamese roasted-shellfish street food into Hanoi House’s clams and congee. In this wellness-obsessed, vegan, gluten-free age, it’s no wonder that the ancient dish is being positioned and embraced as an ultramodern health food. Here, a few delicious new takes on overcooked rice. 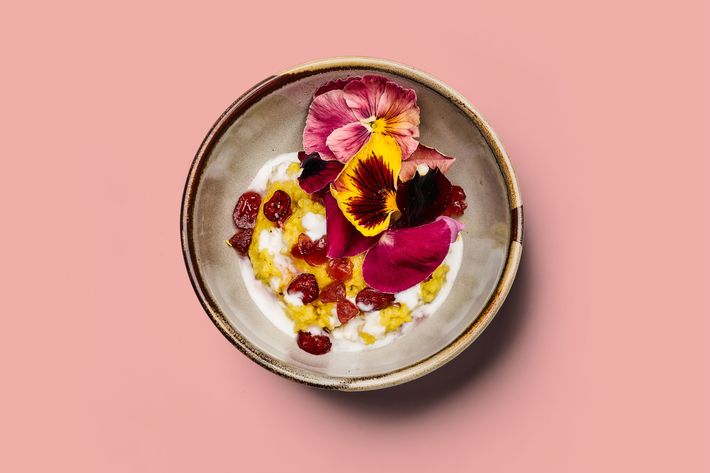 At Aussie-Chinese coffee shop The Good Sort (5 Doyers St.; $9), the jasmine rice is cooked in almond milk, seasoned with turmeric (plus ginger, cayenne, and coconut sugar), and garnished with coconut cream, poached cranberries, dried strawberries, and an Instagram-friendly edible pansy.

The classic congee at dim sum specialist Tim Ho Wan (85 Fourth Ave.; $3.75) hits that elusive sweet spot between thick soup and thin porridge. Beneath the unassuming surface lie shreds of braised pork and bits of both preserved and salted duck egg; on the side, sliced scallion and crispy thumbnail-size chips made from a dough similar to the one used for egg-roll wrappers.

Neal Harden, the chef at Jean-Georges Vongerichten’s abcV (38 E. 19th St.; $10), got the idea to make congee from forbidden or black rice and millet when he was cooking at a luxury-resort health spa in Bali. It’s smooth and fragrant and thicker than most and served with a gang of savory condiments, including strips of nori, fermented chile paste, and mushrooms cooked with fermented black beans. Add a poached egg or an avocado for extra nourishment.

Congee Is the Original Grain Bowl

best in class Yesterday at 12:00 p.m.
11 of the Very Best Air Fryers Custard toast at the ready.
the grub street diet Yesterday at 6:00 a.m.
Karen Chee Is Looking Forward to Her Morning Egg “Peeling the shell is like unwrapping a gift.”
By Rachel Sugar
the year i ate new york Sept. 15, 2022
What’s Wrong With Cocktails Right Now? Bartenders and drinkers both seem a bit bored.
By Tammie Teclemariam
rip Sept. 14, 2022
RIP to the Wine Genius Who Created Two-Buck Chuck Fred Franzia had a way with words too.
gifts they might actually want Sept. 14, 2022
The Best Gifts for Beer Lovers, According to Brewers and Beer Lovers Because you can do better than a novelty beer helmet.
openings Sept. 14, 2022
A Le Coucou Chef Has Taken Over at Manhatta Justin Bogle breaks down the technique on a dozen new dishes.
By Joshua David Stein
report Sept. 12, 2022
Why Have Restaurant Menus Gotten So Simple? Call it the great pare-down.
By Chris Crowley
the grub street diet Sept. 9, 2022
Emma Steiger Eats Dinner at 3:30 — and Again at 10:45 “Even when we ordered, we knew it was too much food.”
By Alan Sytsma
reopening Sept. 8, 2022
Great N.Y. Noodletown Makes Its Triumphant Return A long-delayed reopening has finally happened.
By Chris Crowley
rsvp Sept. 7, 2022
What It’s Really Like Inside a Blindfolded Dinner “The customer is really surrendering to the chef — it’s a lot of trust.”
By Megan Paetzhold
cooking Sept. 6, 2022
The Dinner Party Is Over No more cleaning up.
By Emily Sundberg
the grub street diet Sept. 2, 2022
Galen Druke Has Been Getting Into Protein Shakes “This is probably the most embarrassing part of my diet I’ll admit to, so I might as well get it out of the way up front.”
By Zach Schiffman
the year i ate new york Sept. 1, 2022
Pretending to Vacation in Bushwick Reliving my early 20s during the last unofficial week of summer.
By Tammie Teclemariam
commentary Aug. 31, 2022
Should You Still Pay For Dinner If You Were Robbed While You Ate It? An etiquette question for the age of outdoor dining.
fall preview 2022 Aug. 29, 2022
The New Restaurants You Need to Know About So many openings.
By Alan Sytsma
the grub street diet Aug. 26, 2022
Morgan Jerkins Buys Her Snacks Before the Edibles Hit “Who wants to walk around the corner when you’re really stoned?”
By Alan Sytsma
openings Aug. 25, 2022
A New Chophouse Is Opening in Brownstone Brooklyn Gus’s debuts next week in Carroll Gardens.
By Andrea Strong
the year i ate new york Aug. 24, 2022
Where to Eat (or Get a Massage) in Flushing If you’re taking the train to watch the U.S. Open, you may as well have a decent meal too.
By Tammie Teclemariam
our mayor Aug. 23, 2022
Who Are the Petrosyants Brothers? Eric Adams’s friends are also the city’s most unconventional restaurant power brokers.
By Aaron Short
openings Aug. 22, 2022
A ‘Modern New England’ Tasting Counter Is Headed to Dumbo Pearl Street Supper Club will debut next week.
By Alan Sytsma
More Stories