It was a little-known secret, but right up until sometime yesterday, Walmart.com was the spot for the season’s most impossible-to-find stocking stuffer: the “got retard?” coffee mug. In a listing now long gone from the retailer’s site (as well as Amazon’s, where it was also briefly available), a company called JM Holdings was offering the perfect item for every disability mocker in your life. It wasn’t manufactured by Walmart, but rather made its way onto the website because, like Amazon’s, it lets third-party vendors like that company sell their own products online.

Naturally, vetting procedures are supposed to stop offensive items from appearing, but Walmart’s somehow failed. A rep tells Vocativ the mug clearly violated its prohibited-items policy, so they “quickly removed it from the Marketplace” once they were tipped off, adding it’s “unacceptable a seller put it on the site in the first place.”

Strangely, there wasn’t a big rush to grab one before the product got pulled:

Dear Walmart - I'd like to kindly ask that you remove this product from your online store. As a parent of a child with...

Posted by Noah's Dad - Down Syndrome Awareness on Monday, December 12, 2016

@Walmart do you find your offensive mug "Got Retard?" to be remotely funny & something you should sell? Shameful. Youve lost a patron.

Really, @Walmart , really? Who thought this was acceptable? This is just cruel. Did you think no one would notice? https://t.co/22t5f3Zd4Q

It’s not clear what the point even was, since the offending word doesn’t sound anything like milk, so isn’t even grammatically clever. It may help to know it was part of a larger series: 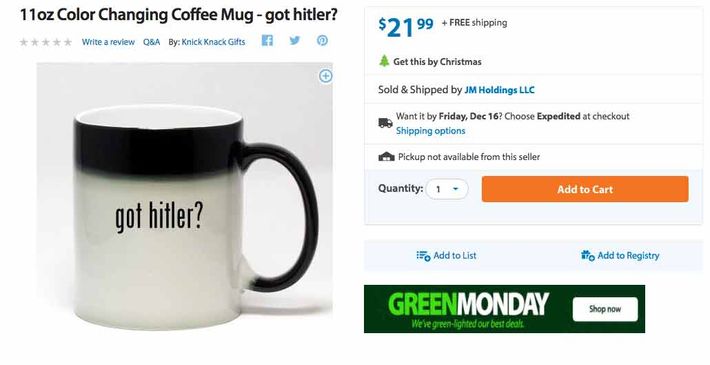 That one came with color-changing sides for about the same price, and has also been removed. Walmart says it’s reviewing JM Holdings’ “entire inventory.”

Walmart Yanks ‘Got Retard?’ Coffee Mugs From Its Website

the year i ate new york 12:20 p.m.
Chocolate and Cheese in the Bronx A post-Thanksgiving trip to Chocobar Cortes.
By Tammie Teclemariam
report 10:50 a.m.
How New Yorkers Are Saving, Swapping, and Splurging on Groceries “You gotta close your eyes and put it in the cart.”
By Paula Aceves and Jane Starr Drinkard
moving Yesterday at 11:19 a.m.
The Famously Tiny I Sodi Is Moving to Bigger Digs Rita Sodi’s beloved little dining room will move — and finally get a bit bigger.
openings Nov. 29, 2022
The Many Influences of Kwame Onwuachi The chef puts his own history on the menu at Tatiana.
By Tiffany Martinbrough
best in class Nov. 28, 2022
11 of the Very Best Air Fryers Custard toast at the ready.
feature Nov. 28, 2022
This Tasting Menu Tastes Like Pot A cross-country dive into high-flying, super-high dollar cannabis cuisine.
By Adam Platt
emergency discussion Nov. 22, 2022
The Menu Gets That Fine Dining Is a Cult Obscure location, insufferable clientele, and staff at the end of their rope — this horror-comedy’s got a lot in common with reality.
By Chris Crowley and Adam Platt
holiday gifts 2022 Nov. 21, 2022
The Best Gifts for Beer Lovers, According to Brewers and Beer Lovers Because you can do better than a novelty beer helmet.
profile Nov. 21, 2022
Scarr’s Pizza Is Expanding — and Adding a Sushi Counter How Scarr Pimentel became Orchard Street royalty.
By Tammie Teclemariam
the grub street diet Nov. 18, 2022
Jeremiah Moss Wishes Arturo’s Would Open Earlier “I feel like I’m betraying myself somehow when I eat nice food.”
By Alan Sytsma
the year i ate new york Nov. 17, 2022
Where to Watch the World Cup Our diner-at-large goes looking for that perfect 5 a.m. sports bar.
By Tammie Teclemariam
closings Nov. 15, 2022
Good-bye to Pearl, the Oyster Bar That Launched a Million Lobster Rolls “A perfect storm” of calamities led to the restaurant’s closing, according to owner Rebecca Charles.
By Steve Garbarino
openings Nov. 14, 2022
The Race to Finish Rockefeller Center’s Restaurants A handful of ambitious new spots are all vying for the attention of, well, everyone.
By Chris Crowley
the grub street diet Nov. 11, 2022
Margo Price Stops for Tacos in Texas and Katz’s in New York “Tonight we might get stoned and go eat a hot dog.”
By Alan Sytsma
the year i ate new york Nov. 10, 2022
Detours and Seafood in Jackson Heights What to do when a food pilgrimage doesn’t go as planned.
By Tammie Teclemariam
scenes Nov. 8, 2022
Saturday Night at Slutty Vegan Brooklyn’s best party is a line for veggie burgers.
By Chris Crowley
grub guide Nov. 7, 2022
11 Extraordinary Pies for Thanksgiving From the city’s most exciting new bakeries.
By Charlotte Druckman
the grub street diet Nov. 4, 2022
Zosia Mamet Shares Swedish Fish With Her Horse “I ride my horse pretty much every day, and I’m terrified of getting hungry.”
By Zach Schiffman
openings Nov. 3, 2022
A Ukrainian Bar Arrives in Soho Slava opens in the former Pegu Club space.
By Robert Simonson
the year i ate new york Nov. 3, 2022
Our Diner-at-Large’s New Favorite Restaurant At Syko, stock up on meze while you grab a bulgogi fatboy for the road.
By Tammie Teclemariam
More Stories