“People are becoming quite precious about what they eat.” Photo: Pal Hansen

London-based chef Yotam Ottolenghi published his fourth cookbook last week — a follow-up to his best-selling Plenty — called, straightforwardly, Plenty More. It’s got 150 vegetarian recipes — including Iranian-style pasta, curry-roasted root vegetables, pea-and-mint croquettes, and black-currant friands. In honor of the release, we sat down Ottolenghi — arguably one of the most trusted cookbook authors in the world, as well as a health-food aficionado — to discuss the new ingredients he features, the recipe most likely to impress a date, and Michelle Obama’s viral turnip video. Plus: We’ve got three of his favorite recipes from the book.

After writing all these smash-hit cookbooks, how do you continue to come up with new recipes? What inspires you?
It’s a bit like writing music: You’ve got all that stuff out there, and you can just put it together in different ways. With this book, in particular, I’ve realized that many of the ingredients that I know really, really well — and worked with for years — are actually interesting when you put them in a different context. So rather than introduce new ingredients — which I do in the book, — I also find new ways to use old ingredients. For instance, the first recipe in the book is a tomato-and-pomegranate salad. They are obviously two of my favorite ingredients, but I’ve never put them together in such a way — until I went to Turkey and ate this salad. It just works … I do quite a lot of grilling and braising of lettuce. Again, I’ve used a lot of lettuce over the years, mostly for salad-y dishes. Or, my savory cauliflower cake.

What are some of the new ingredients you’ve introduced in Plenty More?
There is black garlic — which I don’t know if you’re familiar with — but it’s white garlic, essentially, that’s gone through a process of maturation over a few weeks. As a result, it loses all of its garlicky harshness, and turns quite sweet and black. It’s a fermentation process, and it ends up tasting a bit like licorice or cocoa — kind of sweet in a really weird and wonderful way. You can’t use it on its own, but you can mix it into marinades and sauces and dressings. It just gives a real depth, and with vegetarian cooking, you’re looking for ways to introduce depth.

I’m using a lot of miso. I’ve used miso before in my recipes, but I’m using more and more miso to give a basic underlying flavor to various dishes. I’m using quite a bit of tamarind. And a new pastry called kadaifi! It’s a bit like shredded wheat, or angel-hair pasta. Essentially, it is shredded phyllo — very, very thin pieces of phyllo that’s normally used in Turkish and Greek and Arab cooking to make baklava. It’s crisp and crunchy and I use it in a savory context. I make little nests off this pastry, stuff them with eggplant and cheese, brush them with butter, put them in a tray like a cobbler, and then bake them in the oven. And they really do something quite special.

What is the first recipe in this book that an inexperienced cook should make?
All the recipes are pretty simple. They might have a long ingredient list, but technically, they’re quite simple to make. I think something like the grilled butternut squash with yogurt and chili sauce. It’s very strong on flavor, so I think people would really feel that they’ve done a lot without actually having to work too hard.

If a reader is trying to impress someone — say, a date — what would you recommend?
Zucchini “Baba Ghanoush”: It’s a bit like eggplant baba ghanoush. You need to take your zucchinis and grill them, or burn them so the skin goes brown and the flesh goes smoky. Then, you scoop that out, and that’s a base for salad using goat’s yogurt, lemon juice, and some blue cheese. You spread it on a plate, put butter and cook some chili flakes in it, and spoon that on top so it’s kind of red, with pine nuts. It’s very delicious. And impressive. 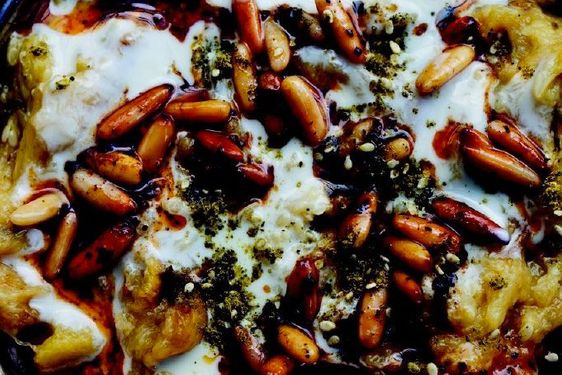 How do you personally eat, day to day?
I spend most of my days in the test kitchen, and on an average day, we try five to eight dishes. By the time I’ve tasted all of them, I come home and I don’t want to eat anymore. I’m so disoriented with all those flavors, so I might just have plain pasta with olive oil and a glass of wine.

On weekends, I cook for friends and family. It’s a bit like in the Middle Eastern tradition of tapas — a little bit of this and a little bit of that — and just spread it out on a table. There’s no starter, main course in our house. It’s all displayed and people help themselves. Lots of vegetables. But often, there’s also some meats.

What about candies or processed foods — any guilty pleasures?
I don’t feel guilty when I eat those things.

And you shouldn’t! That’s not a good way to put it. If you like a food, you should enjoy it.
I have those noodles that you pour hot water over …

Instant ramen?
Instant ramen. I buy it in Chinatown; I have it in my cupboard. I keep cheap candy in my car’s glove compartment; I’ve got all sorts of Mentos and all that kind of stuff. I eat everything! … It’s a vicious cycle: If you start feeling guilty, then you want more. I’m very forgiving. I’ve got a baby who’s 20 months old, so I’m seeing a lot of parents around us who never give their baby sugar. They control the environment. And I say, “You can have a pain au chocolat every once in a little while.” 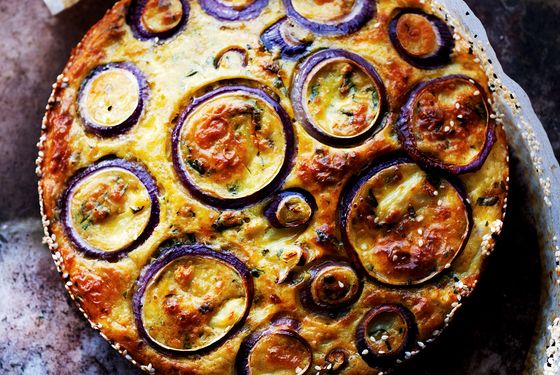 What do you think about the gluten-free craze? New Yorkers, at least, are obsessed.
I do know that there is more gluten intolerance, objectively, in our society than there ever used to be. But I feel that people are becoming quite precious about what they eat. My perspective is that eating should be much more about celebration. People come and say to me, “Oh, can you make a gluten-free bread for me?” And my answer is, if you don’t eat gluten, don’t eat bread. Bread is about gluten. There are so many wonderful things around there. And I don’t eat much bread myself, and I can eat gluten.

It’s very easy to eliminate things from your diet. I mean, I’m saying that from the perspective of someone who can eat anything and I’m sure people would say, “Oh, that’s not nice because I can’t eat sugar.” But, in actual fact, I think there’s so much out there. When people ask if they can make substitutions, I say, “Don’t substitute — just make something else that doesn’t need that ingredient.” My message with my books, and with my restaurants, is that the world of ingredients is massive. The world of recipes is massive. You really can eat a lot of wonderful food, even if you exclude yourself from garlic or from yogurt or from bread.

Did you see Michelle Obama’s video the other day? Turnip for what?
No!

Oh, you have to watch it! I’ll pull it up.
Turnip is one of my favorite vegetables. I should tweet her my recipes … I went to visit her vegetable garden at the White House when I was here last year, and it’s amazing. This is how change happens. It comes from the top. She talks about it, and people listen, then they eat differently, or at least they want to eat differently.

And, in this video, she doesn’t take healthy eating too seriously.
No. Seriousness is not good because it’s off-putting. I think you should just produce and feed people delicious food and let them enjoy it, rather than tell them, “Oh, you should be doing this or you shouldn’t be doing that.” That’s not going to get you very far.