“I have a service and I’m hungry.” Photo: Paul Wagtouicz

Graphic designer Lauren Hom started noticing that many handsome restaurants overlooked a detail that, in her mind, was critical: the hand-writing on their chalkboard signs. “I noticed that it’s common for a restaurant to have a menu board that’s written by, like, a hung-over hostess,” she says. “And it’s totally not a diss on anyone’s handwriting, but I thought, I could do that and make it look kick-ass!” So the 23-year-old freelance illustrator came up with a simple arrangement: She will stop by your restaurant to hand-letter a pretty sign — in exchange for a taste of the foods that she writes on the board. “I’m just really hungry!” she says. “And I just thought, I have a service and I’m hungry and maybe this can work out.” Hom only started the project (Will Letter for Lunch) in September — passing out flyers to local restaurants near her home in Crown Heights — and the pay-it-forward idea has quickly gained traction.

“Actually, the first flyer I ever passed out was a ‘yes,’” she says. “It was this little organic, hippie café called Mountain Café, and I wrote their sandwich board.” Hom is currently working on her sixth project in Clinton Hill — and some places, like Docklands, have requested that she hand-write their entire menus. “I go in, I letter, and then everything I write, I get to eat,” she explains. “It’s a complete fair barter. So if I write the entire menu, sometimes I’ll have to go back multiple times and bring friends to feast. It’s amazing!” 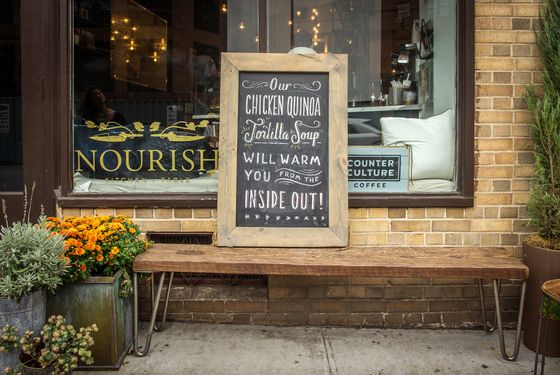 But regardless of how big Will Letter for Lunch grows, Hom has no plans to start charging for her work, even though it takes her about an hour to complete something as small as a sandwich board. “I feel like it almost taints the fun of it if there’s money involved,” she says. “And I have a very steady freelance career, so everything’s fine. And the truth is, free food tastes better, too.” (It’s also great exposure for her paid illustration and typography work, for which she charges $100 per hour.)

Hom’s ultimate goal is to hand-letter a menu for a sushi restaurant, but for now, she focuses mostly on reaching out to casual cafés. “My mom always told me you eat with your eyes first, and so she always made sure all of our food looked nice,” she says. “But then I realized, where typography comes into the picture, is that you eat with your eyes before you even see your food. If you’re looking at a menu and the food’s written out nicely, you’re going to want to eat more. It’s totally weird, but it’s true!” 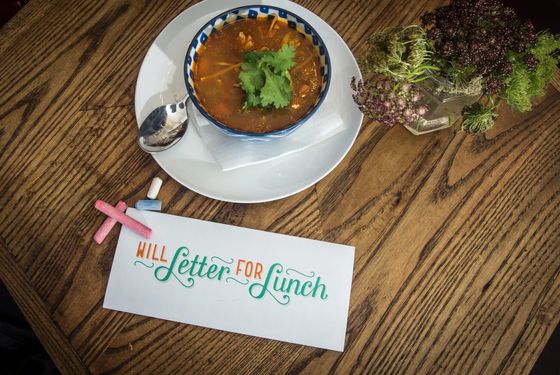 There’s a wholesome quality — though, perhaps, a naïveté — to Hom’s work, and above all, she says she actually just wants to make new friends (and, of course, eat well). “I’ve lived in New York for about five and a half years, and I’ve explored a lot of the city, but I just thought that this would be a fun way to meet more people — especially because I’m interested in food and the restaurant industry. Anyone who opens a restaurant is fascinating to me, because you have to be pretty passionate about it to do it. And there are so many great places to eat in New York. If you’re not eating well in New York, I don’t know what you’re doing. Like, move to Cleveland.”

Will Letter for Lunch: One Woman’s Plan to Hand-Write Menus in Exchange