These days, it’s common to see another Southern restaurant open in New York — specializing in fried chicken, of course — but an “Acadian” concept is quite unique. Acadian cuisine dates back to 17th-century French colonists — many of whom migrated to present-day Louisiana, where they developed “Cajun culture.” King Bee, a new restaurant on 9th Street from Ken Jackson (a founding partner of Herbsaint in New Orleans), chef Jeremie Tomczak (formerly of Red Rooster), and beverage consultant Eben Klemm (Pearl & Ash, Ginny’s Supper Club), aims to connect classic Louisiana country cooking with a French sensibility. “The whole concept is to take these older recipes from the Acadians and twist them in a way that’s more modern and palatable to the diners of today,” Tomczak explains. “Everybody loves dumplings. The Poutine Râpée dish is basically miso dumplings, with lamb’s neck and Partridgeberries.”

Tomczak is the right chef to tackle this tricky balance — before Red Rooster, he worked at Aquavit, under Marcus Samuelsson, for four years. “At King Bee, there a lot of similarities to Swedish cuisine,” he says. “Like, the caraway ployes dish, with buckwheat flour, is a cool little dish. It’s almost like caviar and blini”

The menu also includes ambitious dishes like rabbit rillette with crispy leeks, lobster confit with hominy grits, salt pork, and Brussels sprouts, and buckwheat pappardelle with wild mushrooms, Jerusalem artichoke, and a soft-poached egg. The 60-seat space is designed to have the feel of a modern farmhouse — and guests even have a view of the restaurant’s backyard garden, which provides herbs, lettuces, and other seasonal produce. 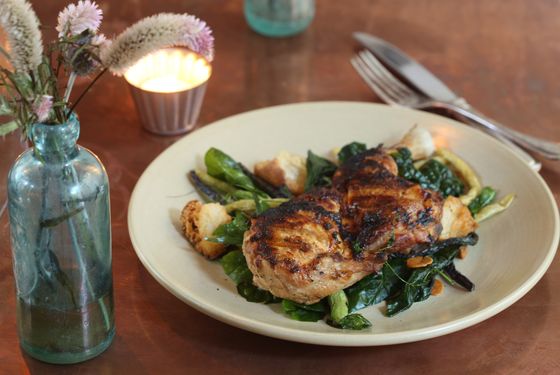 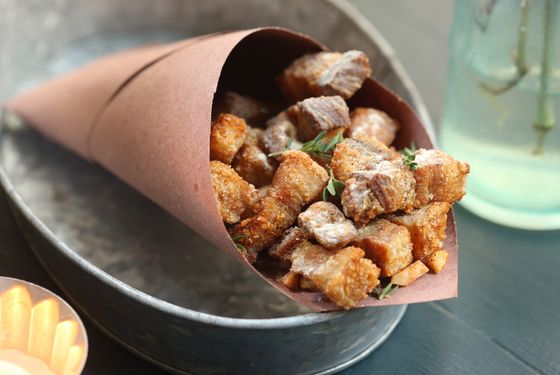 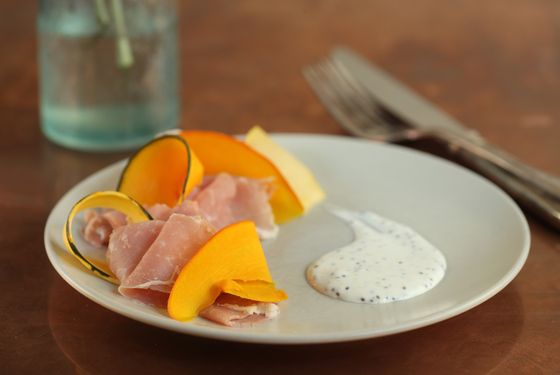 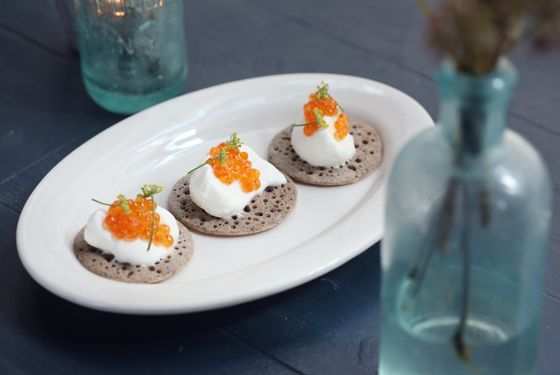 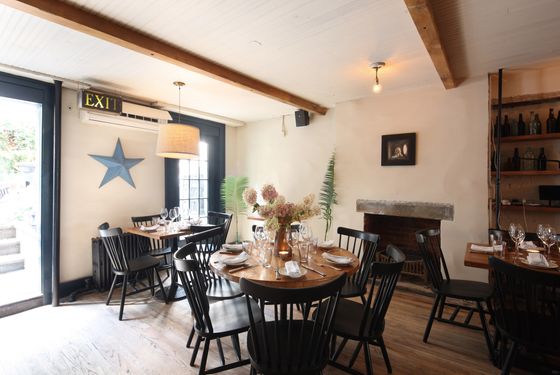 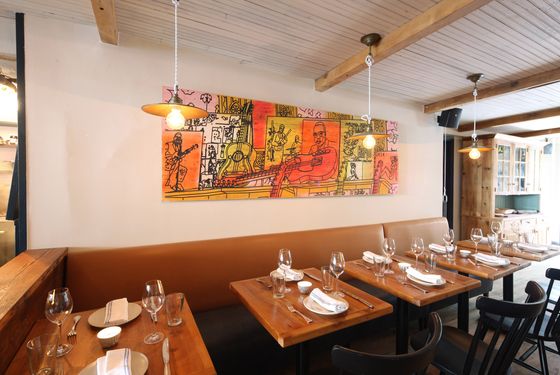 What to Eat at King Bee, a New ‘Acadian-Inspired’ Restaurant in the

problem solving 8:00 a.m.
Everything You Need to Know About Tipping Right Now 15 to 20 percent isn’t going to cut it anymore.
look book 8:00 a.m.
The Look Book Goes to Tatiana  A recent Wednesday night at chef Kwame Onwuachi’s consistently booked Lincoln Center restaurant.
drinks Yesterday at 9:00 a.m.
Via Carota Is Launching Its Own Bottled Cocktails Negronis, Manhattans, and espresso martinis that are ready for your home bar and your TikTok feed.
By Chris Crowley
the underground gourmet Jan. 31, 2023
Italian Beef So Good You’ll Forget About The Bear The sandwiches at Bobbi’s stand out on their own terms.
By Tammie Teclemariam
gifts they might actually want Jan. 30, 2023
The Best Gifts for Beer Lovers, According to Brewers and Beer Lovers Because you can do better than a novelty beer helmet.
field notes Jan. 30, 2023
The Tin Building Has Everything (Except a Purpose) Jean-Georges Vongerichten’s lovely but lifeless $200 million food hall.
By Adam Platt
the grub street diet Jan. 27, 2023
Sylvan Esso’s Amelia Meath Wants the Weird Appetizers “If there’s a bad app, I’ve gotta try it.”
By Alan Sytsma
the year i ate new york Jan. 26, 2023
The Hotpot Haze of Haidilao A steamy, celebratory feast in Flushing.
By E. Alex Jung
news Jan. 25, 2023
Here Are the Semifinalists for the 2023 James Beard Foundation Awards New York is well represented by Department of Culture, Kru, and more.
groceries Jan. 25, 2023
Welcome to the Shoppy Shop Why does every store suddenly look the same?
By Emily Sundberg
the underground gourmet Jan. 23, 2023
Now Is the Time for Trini Roti The Caribbean staple is a perfect midwinter lunch.
By Tammie Teclemariam
the grub street diet Jan. 20, 2023
Kashana Cauley Will Drive an Hour for the Right Yogurt “I believe in good yogurt more than other people believe in God.”
By Zach Schiffman
conversations Jan. 18, 2023
The Rush to Call Fine Dining’s Death Does Noma’s closing announcement really mean other restaurants are doomed?
By Chris Crowley, Alan Sytsma, and Tammie Teclemariam
top story Jan. 17, 2023
Restaurant Workers Are Paying to Keep Their Own Wages Low The National Restaurant Association lobbies Congress to keep the minimum wage low. Revenues from food-safety courses help pay for that.
the underground gourmet Jan. 16, 2023
Where to Find the City’s Best New Soup Elaborate broth is back.
By Tammie Teclemariam
the grub street diet Jan. 13, 2023
Highsnobiety’s Willa Bennett Is Thinking About Her Overnight Oats “I’ve never tried to make the oats while I’m away. It wouldn’t be the same.”
By Zach Schiffman
best in class Jan. 12, 2023
12 of the Very Best Air Fryers Custard toast at the ready.
the year i ate new york Jan. 12, 2023
In Search of the New York Happy Meal Our new diner-at-large looks for the best place to enjoy a martini and fries.
By E. Alex Jung
first taste Jan. 11, 2023
Gjelina Is Already Manhattan’s Hottest Lunch Seven years after it was first announced, the Venice Beach import is finally open.
By Alan Sytsma
closings Jan. 9, 2023
The End of Noma As We Know It René Redzepi is closing his Copenhagen restaurant at the end of 2024.
By Alan Sytsma
More Stories