Ivan Orkin isn’t the only nice Jewish boy from Long Island to aspire to ramen greatness. There’s Joshua Smookler, a Korean-American adopted by a Jewish couple from Port Jefferson, who bopped around the restaurant industry before finding his bliss in a pop-up ramen-ya operating after hours out of a Long Island City bagel shop. This fall, Smookler and his wife, Heidy, parlay that four-month run into their bricks-and-mortar Mu Ramen. Here’s how it happened:

From sommelier to soup:
Smookler was a fine-dining wine guy first, cooking for free at Per Se to break into the back of the house. A latecomer to the ramen craze, he didn’t really fall for it until a bowl of Ippudo’s Akamaru Modern set him on his tonkotsu path. “I experimented,” he says. “I made mistakes.” Eventually, he landed on his signature recipe. “I consider mine very New York style,” he says. “Very clean.”

Disaster strikes, then a bagel-shop miracle:
A real-estate snafu intervened in his plans to open a restaurant in Brooklyn. Noting his Long Island City neighborhood’s dearth of ramen, Smookler sensed an opportunity and persuaded the sympathetic owner of Bricktown Bagels to host his after-hours pop-up. The response was stupendous, culminating in an out-of-nowhere top slot on a Times ramen roundup. 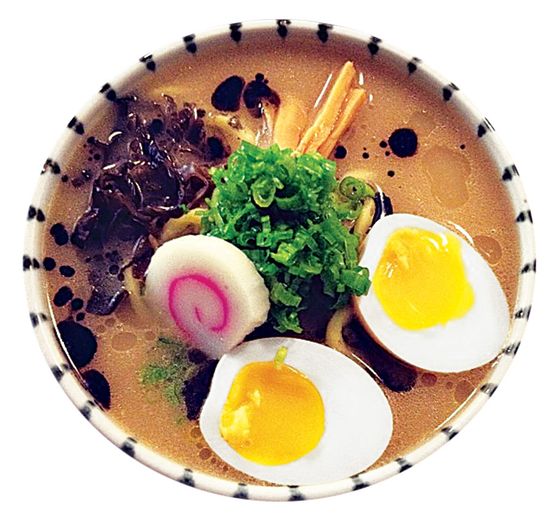 The ramen shop(s) of his dreams:
Smookler found investors for his own space even before the great press, mostly among his local pop-up clientele. His new restaurant is located about four blocks away and divides its 22 seats between the kitchen counter and a communal table, where cooks will take orders and serve the food. (A Harvard Square outpost is slated for 2015.)

Asian menu, Euro cellar:
In addition to four styles of ramen, plus a rotating special, Smookler will serve inventive starters like fried-black-cod steamed buns, a scallion pancake “okonomiyaki” with foie maple syrup, and tofu burrata, plus Japanese beer and sake and a reserve list of his favorite Burgundies, Champagnes, and Scotch.

the grub street diet 6:00 a.m.
Stephanie J. Block Celebrates Taco Tuesday on Monday “Our whole place kind of smells like a Mexican restaurant.”
By Zach Schiffman
the year i ate new york Yesterday at 12:44 p.m.
What Does Wellness Taste Like? Our diner-at-large goes in search of some good food.
at home in asian america Yesterday at 8:00 a.m.
The Asian Food Fixation Why does identity have to revolve so tightly around what we eat?
By Mallika Rao
openings Sept. 28, 2022
Who Is the Tokyo Fixer? And Why Does He Have His Own Bar in New York? Welcome to Shinji’s.
By Jason Diamond
openings Sept. 27, 2022
Masalawala & Sons Is Open, and Park Slope Is Amped The duo behind Dhamaka expands to Brooklyn.
By Chris Crowley
rsvp Sept. 26, 2022
How Shyan Zakeri Created the City’s New Must-Have Burger Shy’s Burgers is not your usual pop-up.
By Margaret Rhodes
best in class Sept. 23, 2022
15 of the Very Best Water Bottles Always be hydrating.
By Emma Wartzman
are u coming? Sept. 23, 2022
Richie Akiva Is No Longer the King of Nightclubs, Okay? His post-pandemic move: a celebrity-packed … members-only club.
By Brock Colyar
the grub street diet Sept. 23, 2022
Bobby Finger Is Excited to Eat Indoors Again “Put me as close to people as possible. Put me at the bar. Put me behind the bar.”
By Rachel Sugar
openings Sept. 22, 2022
Eisenberg’s Enters Its A24 Era The name is new, the counter is old, and a Safdie brother is now involved.
By Jason Diamond
the year i ate new york Sept. 21, 2022
Who Are All These People Eating on DeKalb? It might be the most confusingly busy restaurant stretch in the city.
By Tammie Teclemariam
openings Sept. 20, 2022
At Pecking House, the Line Is Finally Manageable You don’t have to wait for New York’s hottest fried chicken anymore.
By Chris Crowley
openings Sept. 19, 2022
Urban Hawker Brings Singapore to Midtown Inside the new food hall, which features 11 vendors from the island nation.
By Mahira Rivers
best in class Sept. 16, 2022
11 of the Very Best Air Fryers Custard toast at the ready.
the grub street diet Sept. 16, 2022
Karen Chee Is Looking Forward to Her Morning Egg “Peeling the shell is like unwrapping a gift.”
By Rachel Sugar
the year i ate new york Sept. 15, 2022
What’s Wrong With Cocktails Right Now? Bartenders and drinkers both seem a bit bored.
By Tammie Teclemariam
rip Sept. 14, 2022
RIP to the Wine Genius Who Created Two-Buck Chuck Fred Franzia had a way with words too.
gifts they might actually want Sept. 14, 2022
The Best Gifts for Beer Lovers, According to Brewers and Beer Lovers Because you can do better than a novelty beer helmet.
openings Sept. 14, 2022
A Le Coucou Chef Has Taken Over at Manhatta Justin Bogle breaks down the technique on a dozen new dishes.
By Joshua David Stein
report Sept. 12, 2022
Why Have Restaurant Menus Gotten So Simple? Call it the great pare-down.
By Chris Crowley
More Stories