Prepare for the worlds of beer freaks and Tolkien fans to collide as this trio of Hobbit microbrews hits shelves in coming weeks. The series is the work of Olympia, Washington–based microbrewery Fish Brewing and a Fellowship-size group of partners that include BevLink, Ocean Brands, Warner Brothers, and New Line Productions. That’s a lot of credits. 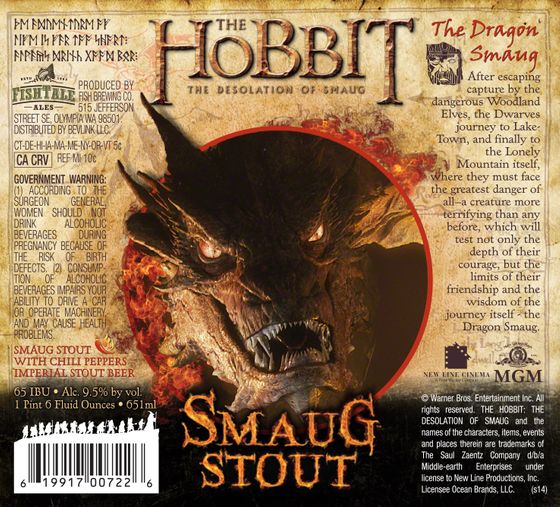 This one’s got chili peppers, because Smaug likes habaneros.Photo: Courtesy of BevLink 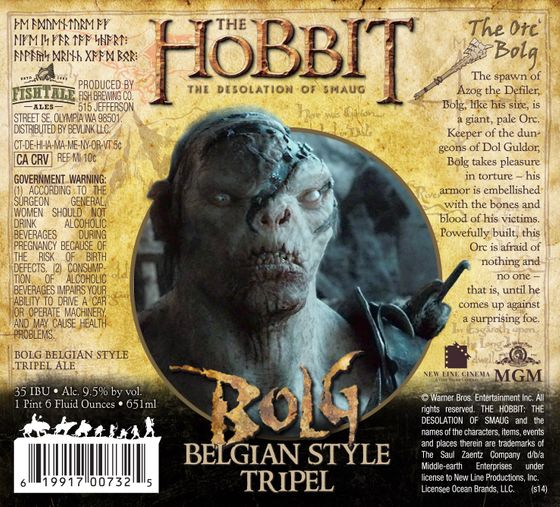 We always kind of suspected Bolg was part Belgian.Photo: Courtesy of BevLink 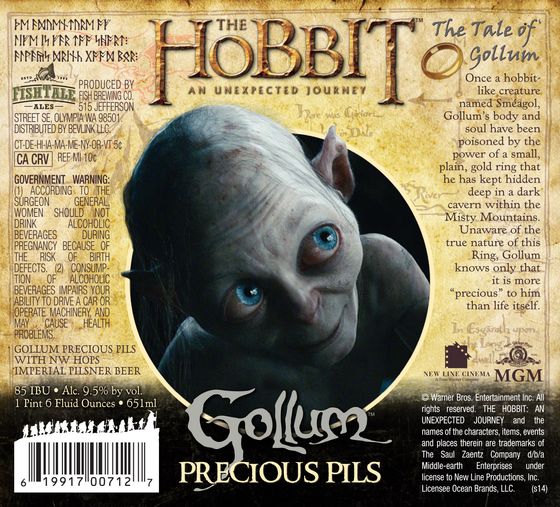 The first release gives Gollum yet another gold-hued monomania — his own Gollum Precious Pils — followed by Smaug Stout, a black imperial stout perversely spiked with fiery chilies; and Bolg Belgian Style Tripel, a strong Belgian named for the new film’s key villain. All three are 9.5 percent ABV. BevLink tells BeerPulse they’ll be available first “in the west,” 22-ounce size only, presumably all in time for The Battle of the Five Armies’ December release, but the eventual goal is nationwide distribution and maybe domination.

lists 11:16 a.m.
Peter Luger Has Lost Its Michelin Star The newest star ratings, which include 19 new spots, were released this week.
the grub street diet 6:00 a.m.
Broti Gupta Dips Her Fries in Mashed Potatoes “I will answer for this act of potato cannibalism on Judgment Day.”
By Alan Sytsma
the year i ate new york Yesterday at 10:05 a.m.
S&P Is a Worthy Successor to Eisenberg’s “A tuna melt here is like a grand soufflé at La Caravelle.”
By Tammie Teclemariam and Adam Platt
lawsuits Oct. 5, 2022
An Anti-Streetery Lawsuit Has Been Dismissed New York can move ahead with a bill to make its Open Restaurants program permanent.
report Oct. 4, 2022
Why Restaurant Workers Are Dining Out Less “That was too much money and the service sucked?”
By Chris Crowley
the grub street diet Sept. 30, 2022
Stephanie J. Block Celebrates Taco Tuesday on Monday “Our whole place kind of smells like a Mexican restaurant.”
By Zach Schiffman
the year i ate new york Sept. 29, 2022
What Does Wellness Taste Like? Our diner-at-large goes in search of some good food.
at home in asian america Sept. 29, 2022
The Asian Food Fixation Why does identity have to revolve so tightly around what we eat?
By Mallika Rao
openings Sept. 28, 2022
Who Is the Tokyo Fixer? And Why Does He Have His Own Bar in New York? Welcome to Shinji’s.
By Jason Diamond
openings Sept. 27, 2022
Masalawala & Sons Is Open, and Park Slope Is Amped The duo behind Dhamaka expands to Brooklyn.
By Chris Crowley
rsvp Sept. 26, 2022
How Shyan Zakeri Created the City’s New Must-Have Burger Shy’s Burgers is not your usual pop-up.
By Margaret Rhodes
best in class Sept. 23, 2022
15 of the Very Best Water Bottles Always be hydrating.
By Emma Wartzman
are u coming? Sept. 23, 2022
Richie Akiva Is No Longer the King of Nightclubs, Okay? His post-pandemic move: a celebrity-packed … members-only club.
By Brock Colyar
the grub street diet Sept. 23, 2022
Bobby Finger Is Excited to Eat Indoors Again “Put me as close to people as possible. Put me at the bar. Put me behind the bar.”
By Rachel Sugar
openings Sept. 22, 2022
Eisenberg’s Enters Its A24 Era The name is new, the counter is old, and a Safdie brother is now involved.
By Jason Diamond
the year i ate new york Sept. 21, 2022
Who Are All These People Eating on DeKalb? It might be the most confusingly busy restaurant stretch in the city.
By Tammie Teclemariam
openings Sept. 20, 2022
At Pecking House, the Line Is Finally Manageable You don’t have to wait for New York’s hottest fried chicken anymore.
By Chris Crowley
openings Sept. 19, 2022
Urban Hawker Brings Singapore to Midtown Inside the new food hall, which features 11 vendors from the island nation.
By Mahira Rivers
best in class Sept. 16, 2022
11 of the Very Best Air Fryers Custard toast at the ready.
the grub street diet Sept. 16, 2022
Karen Chee Is Looking Forward to Her Morning Egg “Peeling the shell is like unwrapping a gift.”
By Rachel Sugar
More Stories