At 5 p.m. yesterday, a line stretched down Eldridge Street, people waiting upwards of an hour to get into the space that recently housed Family Recipe. “What’s going on?” a passing cyclist asked at one point. “Veggie burgers!” was the response — perhaps not the one the cyclist was expecting. Of course, these weren’t any old veggie burgers; they were the new, much-hyped creation of Del Posto’s James Beard Award–winning pastry chef, Brooks Headley. 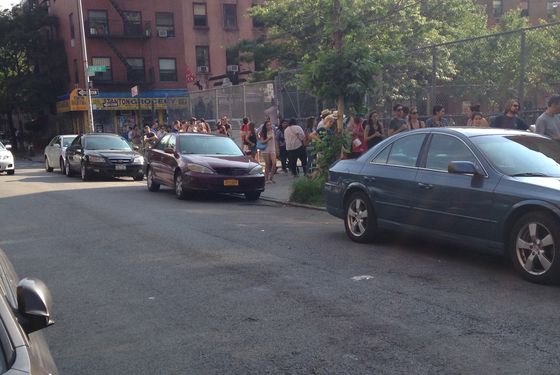 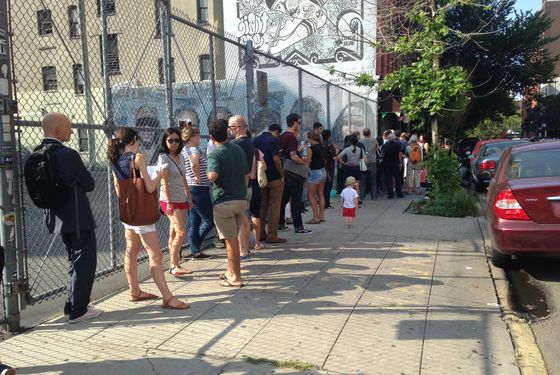 But Headley has been on a campaign to change that with his version: a soft quinoa patty topped with melted Muenster and cheddar cheeses, tomato, mustard, pickles, and a piece of iceberg lettuce on a Martin’s potato roll (or focaccia) that he says is intended to re-create the appeal of fast-food burgers. (For the record, Grub Street’s taste tests indicate he’s achieved that goal.)

While he’s been doling them out at select events — the Beard Awards, an industry party at Questlove’s apartment — yesterday marked the first time they were available to the public, sold for $5 each at a one-day-only pop-up event he called Superiority Burger. 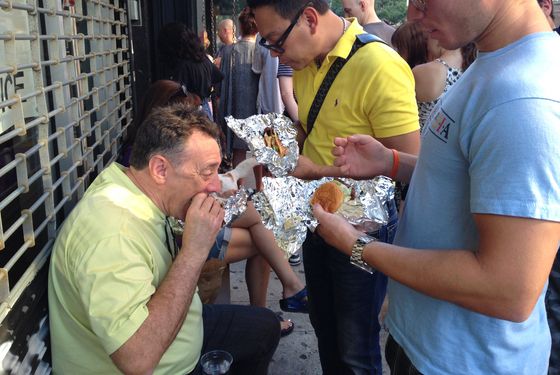 And yesterday’s 100-person-plus line and extremely positive responses on social media proved the burgers might have staying power beyond a single event. When Grub talked to Headley — during the rare moment when he wasn’t helping his team toast buns, warm veggie patties, and mix the Old Bay potato salad he served on the side — if there were plans for a permanent Superiority Burger, the chef just shrugged. “I don’t know,” he said. “I have a pretty great job right now. I don’t really have any plans.”

the underground gourmet Yesterday at 8:00 a.m.
Italian Beef So Good You’ll Forget About The Bear The sandwiches at Bobbi’s stand out on their own terms.
By Tammie Teclemariam
gifts they might actually want Jan. 30, 2023
The Best Gifts for Beer Lovers, According to Brewers and Beer Lovers Because you can do better than a novelty beer helmet.
field notes Jan. 30, 2023
The Tin Building Has Everything (Except a Purpose) Jean-Georges Vongerichten’s lovely but lifeless $200 million food hall.
By Adam Platt
the grub street diet Jan. 27, 2023
Sylvan Esso’s Amelia Meath Wants the Weird Appetizers “If there’s a bad app, I’ve gotta try it.”
By Alan Sytsma
the year i ate new york Jan. 26, 2023
The Hotpot Haze of Haidilao A steamy, celebratory feast in Flushing.
By E. Alex Jung
news Jan. 25, 2023
Here Are the Semifinalists for the 2023 James Beard Foundation Awards New York is well represented by Department of Culture, Kru, and more.
groceries Jan. 25, 2023
Welcome to the Shoppy Shop Why does every store suddenly look the same?
By Emily Sundberg
the underground gourmet Jan. 23, 2023
Now Is the Time for Trini Roti The Caribbean staple is a perfect midwinter lunch.
By Tammie Teclemariam
the grub street diet Jan. 20, 2023
Kashana Cauley Will Drive an Hour for the Right Yogurt “I believe in good yogurt more than other people believe in God.”
By Zach Schiffman
conversations Jan. 18, 2023
The Rush to Call Fine Dining’s Death Does Noma’s closing announcement really mean other restaurants are doomed?
By Chris Crowley, Alan Sytsma, and Tammie Teclemariam
top story Jan. 17, 2023
Restaurant Workers Are Paying to Keep Their Own Wages Low The National Restaurant Association lobbies Congress to keep the minimum wage low. Revenues from food-safety courses help pay for that.
the underground gourmet Jan. 16, 2023
Where to Find the City’s Best New Soup Elaborate broth is back.
By Tammie Teclemariam
the grub street diet Jan. 13, 2023
Highsnobiety’s Willa Bennett Is Thinking About Her Overnight Oats “I’ve never tried to make the oats while I’m away. It wouldn’t be the same.”
By Zach Schiffman
best in class Jan. 12, 2023
12 of the Very Best Air Fryers Custard toast at the ready.
the year i ate new york Jan. 12, 2023
In Search of the New York Happy Meal Our new diner-at-large looks for the best place to enjoy a martini and fries.
By E. Alex Jung
first taste Jan. 11, 2023
Gjelina Is Already Manhattan’s Hottest Lunch Seven years after it was first announced, the Venice Beach import is finally open.
By Alan Sytsma
closings Jan. 9, 2023
The End of Noma As We Know It René Redzepi is closing his Copenhagen restaurant at the end of 2024.
By Alan Sytsma
the grub street diet Jan. 6, 2023
Planet Money’s Jack Corbett Loves a Sale at the Grocery Store “I’m a bargain shopper, aside from my $18 pine nuts.”
By Zach Schiffman
rip Jan. 4, 2023
Chef King Phojanakong Has Died The founder of Kuma Inn was 54.
feature Jan. 3, 2023
Can Tacombi Become the Next Shake Shack? With a major investment from Danny Meyer, founder Dario Wolos is thinking big.
By Rachel Sugar
More Stories