Shrimp patty burgers for everyone! (Or at least the first 1,000 people on line.) Photo: Randy Garutti/Instagram

The original Shake Shack in Madison Square Park opened for business some 30 minutes ago, but it apparently has already attracted the longest line of customers ever recorded in the burger chainlet’s ten-year history. Of course, Shake Shack is running a promotion this week in which five notable chefs contributed a limited edition burger, to be served one day only, and only 1,000 of each, so there’s that. David Chang’s “Shrimp Stack” burger is now being served, and while the ever-trusty Shack Cam shows the line is moving, it also stretches around the park. And then some.

Momofuku chef and owner David Chang’s “Shrimp Stack” burger has got, in addition to a patty of the chainlet’s blend, a “smoked and griddled shrimp patty,” Momofuku Hozon Sauce, Bibb lettuce, pickled onion, and quick-salted cucumber. 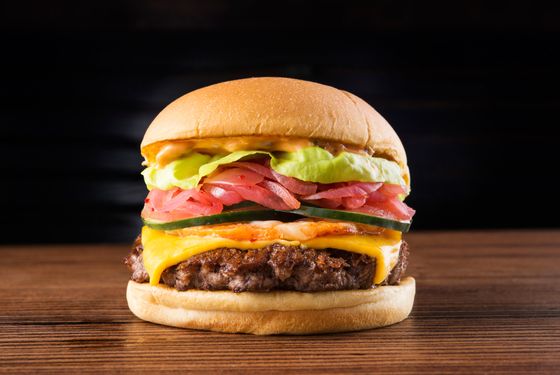 Three days of limited-edition Shack craziness remain, but from the looks of it, David Chang might want to look into opening co-branded Momofuku Shrimp Stack Shack.

underground gourmet quick bite Yesterday at 12:06 p.m.
Little Myanmar’s Burmese Pancake Is Street Food Worth Sitting Down For The new restaurant brings Burmese cuisine back to the East Village.
By Robin Raisfeld and Rob Patronite
report Yesterday at 9:49 a.m.
A Gun Buyback, Sponsored by Junior’s “For us in Brooklyn, it’s been our first really public-private partnership this way,” says Eric Gonzalez, the borough’s district attorney.
restaurant review May 23, 2022
At Patti Ann’s, the Kids’ Menu Is the Only Menu Pigs in a blanket and chicken-fried pork chops just like Mom never used to make.
By Adam Platt