Tabletops have been fashioned out of old beams salvaged from an old Dumbo factory. Photo: Mercedes Noriega/Shake Shack

Hopefully, Shake Shack enthusiasts have had time to sufficiently recover from last week’s nonstop festivities and are now all caught up on their Shackburger origin stories, because the chainlet is now opening its newest New York City location this morning at the corner of Old Fulton Street and Water Street in Dumbo. The dining room of Brooklyn’s second Shake Shack has been outfitted with cedar planks stripped from old Manhattan rooftop water towers, and along with the reclaimed wood tables and chairs, which have bright blue metal trim, the space is decorated with model schooners, lending to a nautical vibe.

As is custom, the new Shake Shack has a few location-specific features:

• It’s the first to have the chain’s Frog’s Leap “Shack Red” and “Shack White” on tap.

• One new concrete, called “Brooklyn Pie Oh My,” consists of a slice of Four & Twenty Blackbirds pie blended with vanilla frozen custard. Pie flavors will rotate; first up is strawberry-balsamic.

• The other new concrete is based on Dumbo’s tourist attraction carousel. The so-called “Caramel Carousel” is made with a base of vanilla frozen custard with banana, sugar cone pieces, caramel sauce, and sea salt.

• Five percent of the proceeds from the aforementioned refreshment benefit Badass Brooklyn Animal Rescue, a nonprofit so worthy you should probably order the concrete even if you hate bananas.

• Yes, that’s a real gas-burning fireplace by the front window, which is nice because Dumbo is cold in February. 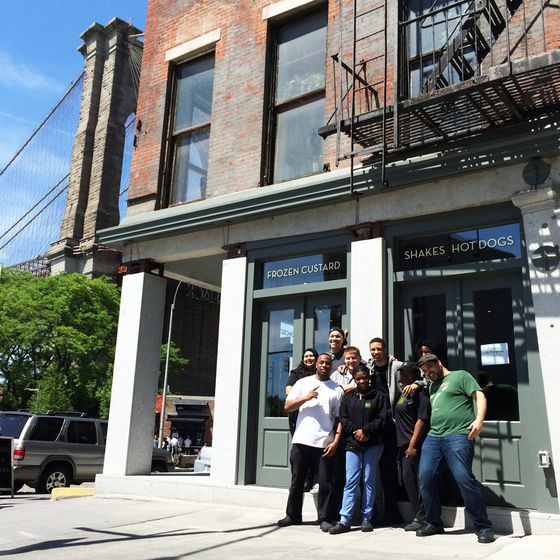 Related: Why Shake Shack and Eleven Madison Park Only Exist Because of Each Other

openings Yesterday at 12:00 p.m.
Masalawala & Sons Is Open, and Park Slope Is Amped The duo behind Dhamaka expands to Brooklyn.
By Chris Crowley
rsvp Sept. 26, 2022
How Shyan Zakeri Created the City’s New Must-Have Burger Shy’s Burgers is not your usual pop-up.
By Margaret Rhodes
best in class Sept. 23, 2022
15 of the Very Best Water Bottles Always be hydrating.
By Emma Wartzman
are u coming? Sept. 23, 2022
Richie Akiva Is No Longer the King of Nightclubs, Okay? His post-pandemic move: a celebrity-packed … members-only club.
By Brock Colyar
the grub street diet Sept. 23, 2022
Bobby Finger Is Excited to Eat Indoors Again “Put me as close to people as possible. Put me at the bar. Put me behind the bar.”
By Rachel Sugar
openings Sept. 22, 2022
Eisenberg’s Enters Its A24 Era The name is new, the counter is old, and a Safdie brother is now involved.
By Jason Diamond
the year i ate new york Sept. 21, 2022
Who Are All These People Eating on DeKalb? It might be the most confusingly busy restaurant stretch in the city.
By Tammie Teclemariam
openings Sept. 20, 2022
At Pecking House, the Line Is Finally Manageable You don’t have to wait for New York’s hottest fried chicken anymore.
By Chris Crowley
openings Sept. 19, 2022
Urban Hawker Brings Singapore to Midtown Inside the new food hall, which features 11 vendors from the island nation.
By Mahira Rivers
best in class Sept. 16, 2022
11 of the Very Best Air Fryers Custard toast at the ready.
the grub street diet Sept. 16, 2022
Karen Chee Is Looking Forward to Her Morning Egg “Peeling the shell is like unwrapping a gift.”
By Rachel Sugar
the year i ate new york Sept. 15, 2022
What’s Wrong With Cocktails Right Now? Bartenders and drinkers both seem a bit bored.
By Tammie Teclemariam
rip Sept. 14, 2022
RIP to the Wine Genius Who Created Two-Buck Chuck Fred Franzia had a way with words too.
gifts they might actually want Sept. 14, 2022
The Best Gifts for Beer Lovers, According to Brewers and Beer Lovers Because you can do better than a novelty beer helmet.
openings Sept. 14, 2022
A Le Coucou Chef Has Taken Over at Manhatta Justin Bogle breaks down the technique on a dozen new dishes.
By Joshua David Stein
report Sept. 12, 2022
Why Have Restaurant Menus Gotten So Simple? Call it the great pare-down.
By Chris Crowley
the grub street diet Sept. 9, 2022
Emma Steiger Eats Dinner at 3:30 — and Again at 10:45 “Even when we ordered, we knew it was too much food.”
By Alan Sytsma
reopening Sept. 8, 2022
Great N.Y. Noodletown Makes Its Triumphant Return A long-delayed reopening has finally happened.
By Chris Crowley
rsvp Sept. 7, 2022
What It’s Really Like Inside a Blindfolded Dinner “The customer is really surrendering to the chef — it’s a lot of trust.”
By Megan Paetzhold
cooking Sept. 6, 2022
The Dinner Party Is Over No more cleaning up.
By Emily Sundberg
More Stories