The hot sauce kings at Tabasco have recently been flooding the market with all kinds of spicy, populist flavors, so it was only a matter of time before they set their sights on that seminal condiment of the neo-hipster, post-gourmet dining era: sriracha. Like Huy Fong’s iconic green-capped model, the new beta version of Tabasco’s “Premium Sriracha Thai Chili Sauce” comes in a squirt bottle, although the Tabasco bottle is squatter than the original and not nearly as fun to look at. There’s a little bit of Thai script stenciled along the bottom of the Tabasco version, but there’s no puff-chested rooster on the front, no runic messages written in Chinese characters, and no boisterous operating instructions on the back, translated into English, Spanish, and French.

To examine the other, more subtle differences between the two hot sauce titans, we assembled an intrepid panel of Grub Street experts over lunch the other day. As card-carrying members of the new Sriracha Generation, we weren’t interested in seeing how these mongrel American formulas compared to the ancient Thai versions of the sauce. We only wanted to know how the latest entry to this increasingly trendy, crowded field stacked up against the reigning champ from Irwindale.

Our tasters sniffed the two chili sauces, eyeballed them for color, and probed their texture with plastic forks. We paired them with a variety of carefully selected Sriracha-friendly delivery systems, including chicken wings, bok choy, Momofuku pork buns, and even carry-out pizza. We debated our findings exhaustively, or at least until all the pork buns were gone.

We’ve compiled our tasting notes below, along with a grading system for each category from numbers 1 (not so good) to 5 (great), and tallied the final score below.

Presentation
Huy Fong: 5
Tabasco: 3
As stated above, our judges preferred the look of the iconic Sriracha bottle hands-down. The Tabasco version also tends to squirt all over the place, which can be a hazard when you’re talking about a five-alarm chili sauce. The one thing we like about the Tabasco bottle is its snap-down top, which prevents chili gunk from collecting around the nozzle.

Color
Huy Fong: 5
Tabasco: 2
In comparison to the vivid, bracing chili-pepper redness of the original sriracha, our panel thought Tabasco’s version looked flat and brownish. “It looks like rusty red paint,” said one of our experts. 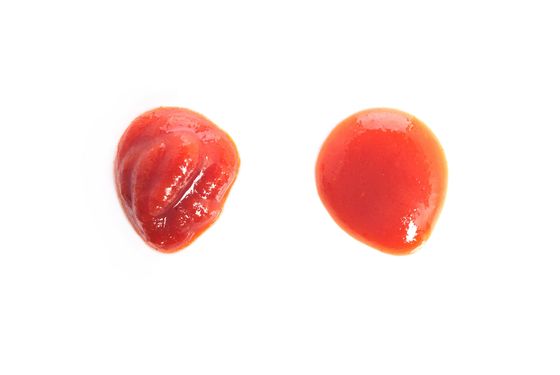 Huy Fong’s version on the left. Tabasco’s runnier sauce is on the right.Photo: Jed Egan

Texture
Huy Fong: 4
Tabasco: 3
The Tabasco version is runny and “slithery,” in the words of my sriracha-loving daughter, Penelope, while the original sriracha has a chunkier, more complex texture. It’s one of the reasons we thought Tabasco worked better for flavoring cooked dishes, while sriracha was more of a condiment.

Nose
Huy Fong: 4
Tabasco: 3
Compared to the almost floral quality of the original sauce, Tabasco’s sriracha exudes a sweet, flat, garlicky smell. The difference is the fermented peppers in David Tran’s recipe, the liberal use of sugar, and that ineffable funky terroir of Irwindale, California.

Heat
Huy Fong: 4
Tabasco: 4
Fans of heat will like Tabasco’s sriracha, which has a spicier kick and a sharper, more upfront chili pepper quality. The heat in the original sauce is leavened with garlic and sugar, and, in the words of one taster, “lingers a little more pleasantly on the tongue.”

Overall Taste
Huy Fong: 5
Tabasco: 3 ½
“Spicy ketchup” was one judge’s pithy summation of Tabasco’s sriracha’s taste profile, which fans of ketchup will tell you isn’t such a bad thing. But it’s no match for the versatile, addictive taste of the original. “There’s no contest,” said one judge, as he polished off the last pork bun, “I have to give the nod to the King.”

Final Score (out of a possible 30)
Huy Fong: 27
Tabasco:  18 1/2
Tabasco put up a solid showing, but the Huy Fong version won out across the board. It also only costs about half as much as the Tabasco version, meaning there’s really no reason to replace the green-capped bottle that’s probably already in your pantry.

Earlier: Tabasco Launches Its Own Sriracha — But Seems Determined to Keep It a Secret