Piccolo Me, a café and brew-bar pop-up company based in Sydney, already bottles its own Nutella iced coffee, which is exactly what it sounds like, and next week it’s adding something it calls a “Nerdtella Bomb” to the menu, for a limited time. 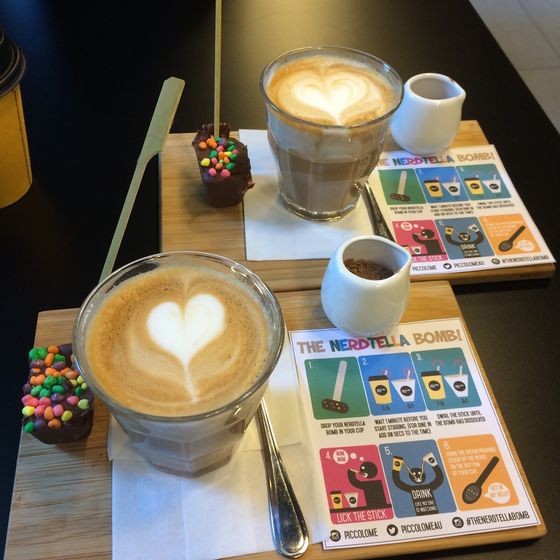 What you get, essentially, from the looks of it, is a nice fair-trade latte with some precision foam art, which you then totally obliterate by plopping a giant payload of Nerds-candy-spiked Nutella into the glass. You stir, wait, and drink; when it’s all over, you use a spoon to dislodge the less fortunate pieces of Wonka candy embedded in that benthic layer of hazelnut spread at the bottom of the cup.

“I can’t imagine how sickly sweet that must be. A blob of nutella and nerds? May as well throw in some sugar sachets and complete the package,” a Reddit user writes, and it seems hard to disagree. Still, Australia gets flat whites and Nutella lattes at their coffee shops while we get Oprah Chai and “wellness” yogurt smoothies made with kale? Something’s not right about this.

underground gourmet quick bite 12:06 p.m.
Little Myanmar’s Burmese Pancake Is Street Food Worth Sitting Down For The new restaurant brings Burmese cuisine back to the East Village.
By Robin Raisfeld and Rob Patronite
report 9:49 a.m.
A Gun Buyback, Sponsored by Junior’s “For us in Brooklyn, it’s been our first really public-private partnership this way,” says Eric Gonzalez, the borough’s district attorney.
restaurant review Yesterday at 10:20 a.m.
At Patti Ann’s, the Kids’ Menu Is the Only Menu Pigs in a blanket and chicken-fried pork chops just like Mom never used to make.
By Adam Platt