This one co-opts Homer and Bart Simpson and still manages to suck. Photo: Darren Udaiyan/Saatchi

These images would be deplorable without context, but because they depict entrepreneur and art mogul Charles Saatchi choking celebrity chef (and ex-wife) Nigella Lawson just as he did in real life at a Mayfair restaurant a year ago, they are just the worst. The incident, which happened in public, preceded the couple’s separation and divorce, which played out amid allegations of drug use and other dismal things as a British courtroom spectacle. Now the ordeal has its own dismal commemorative art: No fewer than seven depictions of the choking incident have been spotted among the 40,000 pictures on display at saatchiart.com, a Los Angeles-based online art store which allows artists to market sell originals and print; the site has ties to Saatchi’s famed London gallery and takes a cut of all sales. 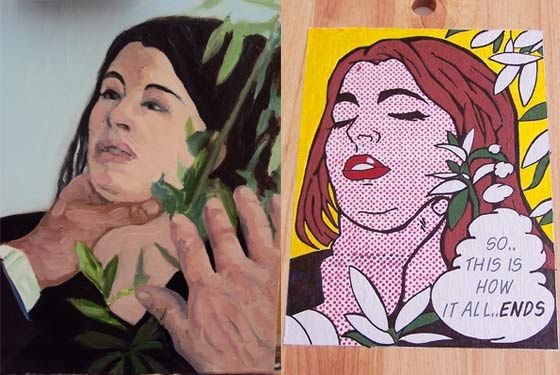 The Daily Mail goes ahead and christens it a new genre called “throttle art,” but meanwhile, the artists themselves explain their motives are about something else entirely: Of Art Collector Throttling a Cook, above left, Jane Kelly says, “I put it on there to have a laugh at Saatchi.” A former Saatchi & Saatchi employee’s Lichtenstein–ish Last Course is done up on a cutting board, which is perhaps some kind of nod to Lawson’s “Domestic Goddess” cookbook-author persona. 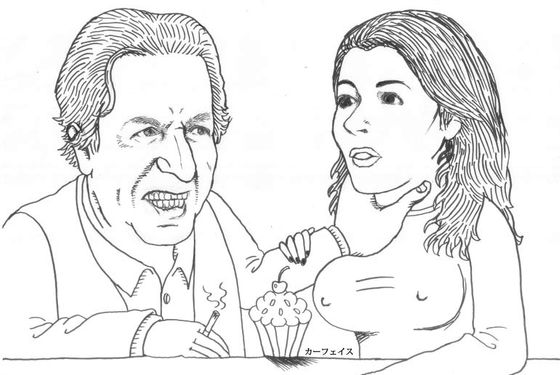 So, what’s happening here? Saatchiart.com is just the middleman between artists and collectors, after all, and it’s not as if these often garish pieces were commissioned by Saatchi himself. They are, however, prints and works being sold under the banner of his name, and apparently as a wry form of protest.

Still, as a submission-based marketplace, there’s a standard user agreement in place that prohibits artwork that infringes on copyright, or is otherwise “defamatory,” “violent,” or “threatening or promotes violence.”

A few of these categories would seem to apply to these, but the site’s administrators disagree. “Saatchi Art does not believe in censorship unless the material is pornographic or incites racial hatred,” the site’s chief curator says. “Would it have been a better story if I had censored artists whose work might be personally disobliging?” Saatchi himself said, explaining the listings and impulse against censorship to the Mail.

Meanwhile, Saatchi Art’s commission from each sale is 30 percent; artists get 70 percent.

Darren Udaiyan, the guy who wants $30,000 for the Simpsons-meets-Van Gogh at the top here, implies that none of this should strike anyone as a statement of any kind about violence against women. In fact, it’s been pointed out, the depiction is par for the course for Udaiyan, who identifies with the Stuckist movement, whose members perceive Saatchi as a destructive art-world force. “It’s not really controversial,” says Udaiyan. “Saatchi is strangling Nigella, but it’s also about him squeezing the art market. It works on many levels. It’s a comment on the art market and how people control it.”

drinks 12:02 p.m.
I Regret to Inform You There Will Be No ‘Drink of the Summer’ Dirty Shirley, we hardly knew you.
By Chris Crowley
chains Yesterday at 12:57 p.m.
We Found a Long-Lost Taco Bell Burrito Hiding Way South of the Border Finding seven layers of heaven in Santiago, Chile.
openings Aug. 15, 2022
Hakata TonTon Is Back Hot pot, cold ramen, and plenty of pig.
By Chris Crowley
pop-ups Aug. 12, 2022
A Queer Food Festival Is Happening in Queens Tomorrow Queer Cafeteria is popping up at Socrates Sculpture Park.
the grub street diet Aug. 12, 2022
L Morgan Lee Searches for the Joy in Dinner “I had my first bite and felt my spirit start to stir.”
By Zach Schiffman
meow Aug. 11, 2022
We Ate at the Fancy Feast Restaurant for Humans Yes, the fancy cat was there.
By Choire Sicha
the year i ate new york Aug. 10, 2022
Can New York’s Hotels Make Breakfast Important Again? Our late-rising diner-at-large gets up for some new spreads.
By Tammie Teclemariam
closings Aug. 9, 2022
Arrivederci to Nunzio’s, an Unsung Staten Island Slice Mecca After 80 years in business, the pizzeria is set to become a cabinet showroom.
By Chris Crowley
what to eat Aug. 8, 2022
Meet Brooklyn’s Newest Vegan Meatball Hero Garden Carver specializes in meat-free versions of beloved comfort foods.
By Megan Paetzhold
the grub street diet Aug. 5, 2022
Filmmaker Rebeca Huntt Is Serious About Breakfast “I made my oatmeal pancakes and watched Before Sunrise.”
By Alan Sytsma
the year i ate new york Aug. 4, 2022
Not All Culinary Journeys Can End in Success Sometimes you travel for a dish with a perfect online rating — and then you have to take your L in stride.
By Tammie Teclemariam
what to eat Aug. 3, 2022
How to Engineer a Clam Slice In a stunning bit of pizza innovation, F&F offers the New Haven specialty one piece at a time.
By Chris Crowley
reopenings Aug. 2, 2022
Txikito Is Back — Finally The neighborhood favorite is set to reopen after two-plus years of darkness.
By Charlotte Druckman
food tv Aug. 1, 2022
Everyone’s Thirsty for The Bear. Here’s What It’s Really Like to Date a Chef. “We all get into this line of work because we have personality disorders and massive daddy issues.”
By Nastassia Lopez
the grub street diet July 29, 2022
Sarah Thankam Mathews Eats Lychees on the Beach “I feel a happiness so intense and sudden it leaves me gelatinous.”
By Rima Parikh
openings July 28, 2022
He Has 11 Million TikTok Followers. Now He’s Throwing Ice Cream in Noho. “If you walk in and there is ice cream flying around in the air? It automatically sends the energy level up.”
By Ella Quittner
the year i ate new york July 28, 2022
Swimming With the Regulars at Marea An extravagant weeknight meal where everyone seems to know each other.
By Tammie Teclemariam
are u coming? July 27, 2022
A Tea-Spilling Lawsuit Upends a Hell’s Kitchen Gay Club Just how woke can a megaclub hosting underwear parties really ever be?
By Brock Colyar
field notes July 27, 2022
A Final Trip to Papaya King on the Eve of Its Likely Destruction The iconic hot-dog counter’s days appear numbered.
By Adam Platt
openings July 26, 2022
Cocktail Royalty Rolls Into New York A version of the fabled Dukes martini is now being poured at the Hotel Chelsea’s Lobby Bar.
By Robert Simonson
More Stories