Brooklyn Brewery was just the beginning. Thanks to the rise of local microbreweries with on-site taprooms, it’s possible to embark on the hops-and-malt-driven equivalent of a wine-tasting weekend in Napa without ever leaving town.

Transmitter Brewing
53-02 11th St., Long Island City; 646-378-8529. Open Fri. 5-7:30 p.m., Sat. and Sun. noon-4 p.m.
Transmitter is the full-time side project of Rob Kolb (by day an art director) and Anthony Accardi (a printmaker). In their brewery, housed in a former car garage, they create and bottle beers like the dry S4 Saison Ale. Drop by the weeks-old, ten-by-ten-foot tasting space to try the fruity G3 Golden Ale or sign up for the CSB—that’s Community Supported Brewery; for half a year it supplies you with two large-format bottles a month, plus beer discounts ($175). 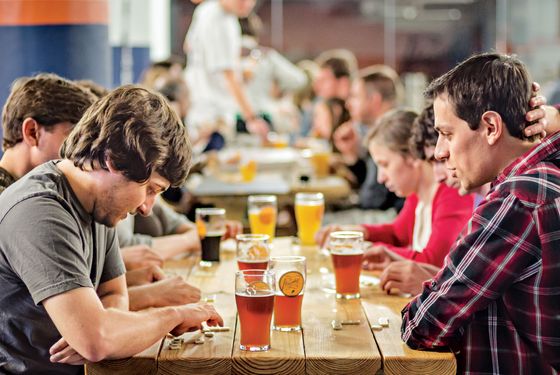 Flagship Brewing Company
40 Minthorne St., nr. Victory Blvd., Staten Island; 718-448-5284. Open Thurs. and Fri. 5-11 p.m., Sat. 2-11 p.m., Sun. 1-8 p.m.
“Staten Island Born and Raised” read the backs of staffers’ shirts at Flagship, one of only two breweries to have opened in the self-described “forgotten borough” in the past 50 years. The brand-new taproom—just a short walk from the ferry—is already so populated by everyone-knows-everyone neighbors that you might be tricked into feeling like you’re at a (albeit brightly lit, spacious) locals’ watering hole. But unlike at a dive, the beers on offer ($5 for a pint), made in the adjacent, glassed-off warehouse, are top-notch, like the Flagship APA, hoppy with a clean finish. 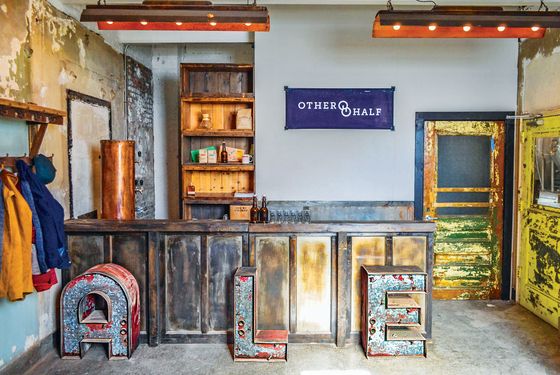 Gun Hill Brewing Company
3227 Laconia Ave., nr. Boston Rd., the Bronx; 718-881-0010. Open Mon.-Thurs. 1-9 p.m., Fri. 1-10 p.m., Sat. noon-10 p.m., Sun. noon-7 p.m.
In the early 1900s, the Bronx was home to an enclave of breweries, with some seven beer-makers in a 20-block radius: Zeltner’s, Eichler’s. Today, only Gun Hill, whose taproom opened in March, brews there (though the Bronx Brewery will move to Port Morris soon). Stop by for an informal brewery tour; order a flight ($8) or a pint ($5) in the wooden-walled tasting area to try beers like the seasonal Schuyler’s American Wheat. Also available: snacks like popcorn and, on weekends, substantial food offerings—Bill’s Balls serves meatball sliders on Fridays. 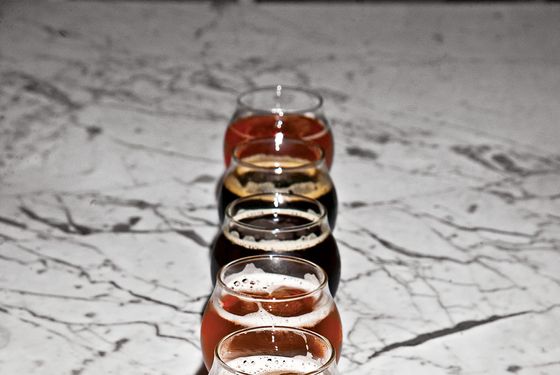 Finback Brewery
78-01 77th Ave., Glendale; 718-628-8600. Open Fri. 4-8 p.m., Sat. noon-6 p.m., Sun. 1-5 p.m.
In a warehouselike space in the part of Queens where Madonna-and-Child figurines abound, co-owners Kevin Stafford and Basil Lee offer up Belgian beer-style glasses filled with their culty brews, like the sour ale Starchild. Tour the immaculate brewing space or just hang out with fellow local-beer fanatics in the white-walled, soon-to-be-art-bedecked taproom, which opened in May. Try the Coasted Toconut milk stout, which is heavy on the chocolate, with a light note of coconut at the finish ($2 for a taste; $5 for a pint; $16 for a growler fill; $115 CSB, a growler a month for six months). Note the BYO food policy.

Rockaway Brewing Company
46-01 5th St., Long Island City; 718-482-6528. Open Thurs. and Fri. 3-8 p.m., Sat. and Sun. noon-8 p.m.
This brewery’s aesthetic matches its namesake neighborhood’s laid-back, DIY surfer vibe—in fact, it started as a beachside-bungalow brewing venture before moving to LIC. In the standing-room-only tasting room (which will soon be renovated and expanded), you can buy a $6 “Magical Mystery Tour,” which permits you to wander the backroom brewery and survey equipment labeled with cardboard-and-Sharpie signs. The tour comes with four samples of beers like the Rockaway ESB (English-style extra-special bitter) and free bags of Cape Cod potato chips.

Big Alice Brewing
8-08 43rd Rd., Long Island City; 347-688-2337. Fri. 5-8 p.m.
In their first year, Big Alice’s founders have released more than 100 ten-gallon batches of their nanobrews, each time using a different recipe—these beers are known for eccentricity and adventurousness. There was the Chocolate Morel Stout (No. 14), the Dandelion and Fennel Bulb IPA (No. 60), the Jalapeño Rye (No. 93). Most of these experiments can’t be found outside the tasting room, where you can stop by for a small pour of the weekly rotating options, buy a 750-ml. bottle ($18), or sign up for the CSB plan ($200 for 12 bottles).

*This article appeared in the June 16, 2014 issue of New York Magazine.

the grub street diet 14 mins ago
Novelist Xochitl Gonzalez Always Has Capers on Hand “Capers are your bitchy friend who can’t keep their mouth shut.”
By Emma Alpern
problem solving Yesterday at 8:00 a.m.
Everything You Need to Know About Tipping Right Now 15 to 20 percent isn’t going to cut it anymore.
look book Yesterday at 8:00 a.m.
The Look Book Goes to Tatiana  A recent Wednesday night at chef Kwame Onwuachi’s consistently booked Lincoln Center restaurant.
drinks Feb. 1, 2023
Via Carota Is Launching Its Own Bottled Cocktails Negronis, Manhattans, and espresso martinis that are ready for your home bar and your TikTok feed.
By Chris Crowley
the underground gourmet Jan. 31, 2023
Italian Beef So Good You’ll Forget About The Bear The sandwiches at Bobbi’s stand out on their own terms.
By Tammie Teclemariam
gifts they might actually want Jan. 30, 2023
The Best Gifts for Beer Lovers, According to Brewers and Beer Lovers Because you can do better than a novelty beer helmet.
field notes Jan. 30, 2023
The Tin Building Has Everything (Except a Purpose) Jean-Georges Vongerichten’s lovely but lifeless $200 million food hall.
By Adam Platt
the grub street diet Jan. 27, 2023
Sylvan Esso’s Amelia Meath Wants the Weird Appetizers “If there’s a bad app, I’ve gotta try it.”
By Alan Sytsma
the year i ate new york Jan. 26, 2023
The Hotpot Haze of Haidilao A steamy, celebratory feast in Flushing.
By E. Alex Jung
news Jan. 25, 2023
Here Are the Semifinalists for the 2023 James Beard Foundation Awards New York is well represented by Department of Culture, Kru, and more.
groceries Jan. 25, 2023
Welcome to the Shoppy Shop Why does every store suddenly look the same?
By Emily Sundberg
the underground gourmet Jan. 23, 2023
Now Is the Time for Trini Roti The Caribbean staple is a perfect midwinter lunch.
By Tammie Teclemariam
the grub street diet Jan. 20, 2023
Kashana Cauley Will Drive an Hour for the Right Yogurt “I believe in good yogurt more than other people believe in God.”
By Zach Schiffman
conversations Jan. 18, 2023
The Rush to Call Fine Dining’s Death Does Noma’s closing announcement really mean other restaurants are doomed?
By Chris Crowley, Alan Sytsma, and Tammie Teclemariam
top story Jan. 17, 2023
Restaurant Workers Are Paying to Keep Their Own Wages Low The National Restaurant Association lobbies Congress to keep the minimum wage low. Revenues from food-safety courses help pay for that.
the underground gourmet Jan. 16, 2023
Where to Find the City’s Best New Soup Elaborate broth is back.
By Tammie Teclemariam
the grub street diet Jan. 13, 2023
Highsnobiety’s Willa Bennett Is Thinking About Her Overnight Oats “I’ve never tried to make the oats while I’m away. It wouldn’t be the same.”
By Zach Schiffman
best in class Jan. 12, 2023
12 of the Very Best Air Fryers Custard toast at the ready.
the year i ate new york Jan. 12, 2023
In Search of the New York Happy Meal Our new diner-at-large looks for the best place to enjoy a martini and fries.
By E. Alex Jung
first taste Jan. 11, 2023
Gjelina Is Already Manhattan’s Hottest Lunch Seven years after it was first announced, the Venice Beach import is finally open.
By Alan Sytsma
More Stories