“This is the best crepe I’ve ever had in my entire life.” Photo: Melissa Hom

New York City finally has its very own Nutella Bar, which opened yesterday afternoon inside Eataly (replacing the megamart’s currently shuttered wine shop). Sure, the idea of a Nutella bar is great, but how does it play out in practice? To find out, we recruited the best critics we could think of: New York Magazine critic Adam Platt’s 14-year-old daughter, Jane, his 15-year-old niece Clare, and their friends Elektra and Carolyn. Read on to see what everyone had to say about the new hazelnut-and-chocolate palace. 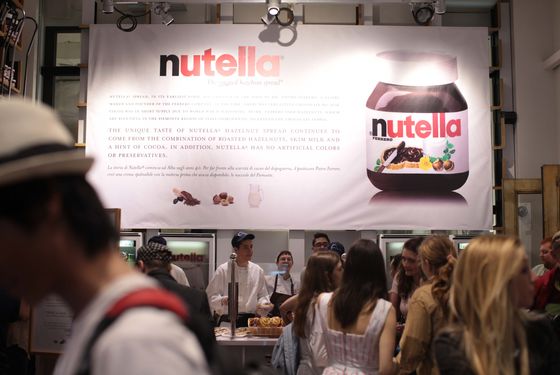 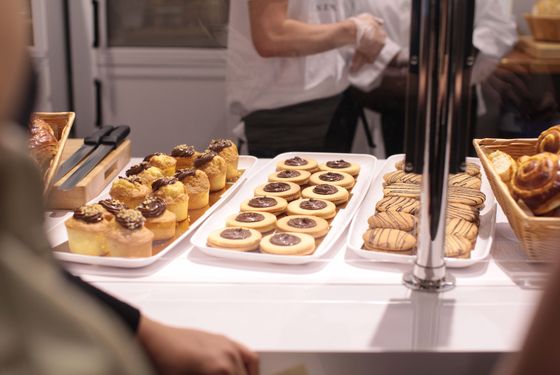 “We want everything!” Clare shouted as we all entered the bar. She wanted to pluck one of the hundreds of Nutella jars off the wall to take home, too, but she was somewhat wary of the overall concept: “I don’t see the necessity of having something to put Nutella on — you just need a spoon!” This critic knows how to keep it real. 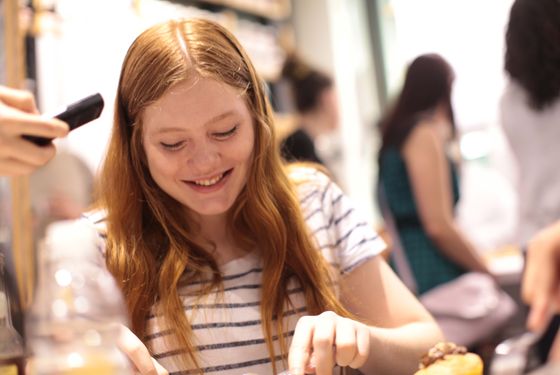 After a tasting of all the wares, the young critics-in-training unanimously declared the crepe to be the clear favorite. It only took one bite for Carolyn to proclaim it “the best crepe I’ve ever had in my entire life.” Jane said she favored the crepe “because it’s very soft and doughy, and also warm.” And Clare put it simply: “The crepe is the best because there’s the most Nutella in it.” The girls also agreed that the hazelnut-cookie sandwich is a strong second choice. 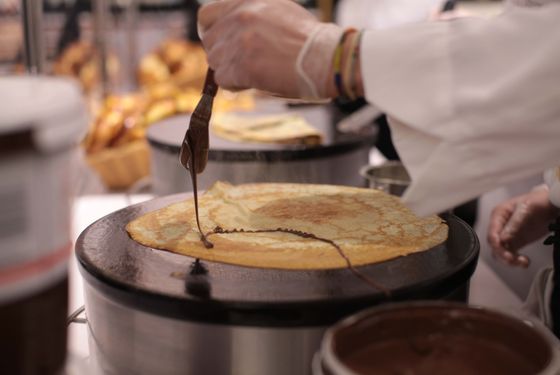 But what does an adult think? Adam Platt, who called the Nutella Bar “an insane asylum” inside “the city’s greatest food circus,” admits he’s not a big fan of Nutella to begin with, but he still sampled the food. “The muffin turns to cement in your mouth, but the croissant is not bad,” he offered. “It might be my favorite because it’s got the most bulk … What’s the opposite of a flavor bomb? Nutella wipes everything out.” 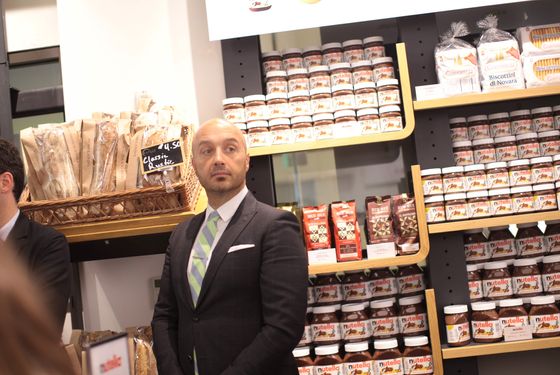 As the girls slowed down (it might have been the world’s most immediate sugar crash), they reevaluated their earlier opinions. Once the novelty wore off, our young critics did notice some room for improvement: “I’d like it to be more adventurous,” Clare said. “Instead of just putting Nutella on things, they could use Nutella in the batter — like in a waffle. In the wintertime, maybe Nutella hot chocolate. Or something with strawberries, because that’s such a good combination.” 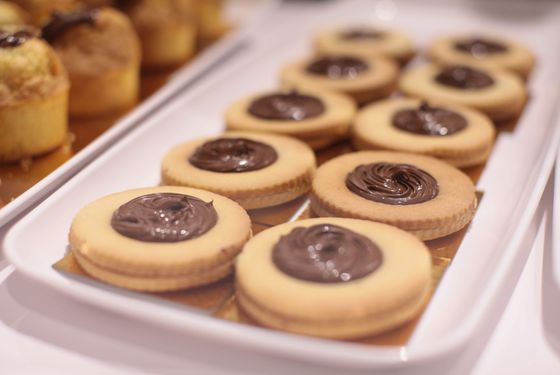 There’s no such thing as too much Nutella.Photo: Melissa Hom

Jane suggested Nutella ice cream. And Elektra, who initially said it was “the best Nutella crepe ever,” admitted that she could find an equally good crepe at many other places in the city. 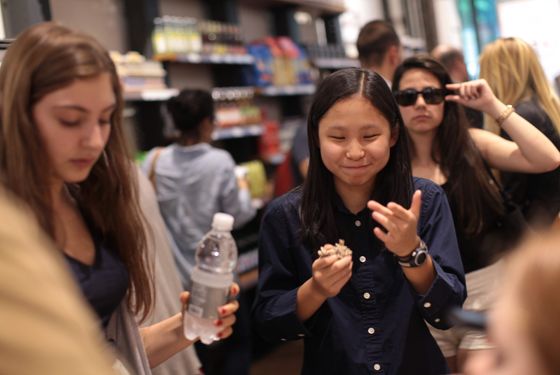 Jane would like to see Nutella “added to recipes, instead of just spread on things.”Photo: Melissa Hom

“With all the different types of food available at Eataly, I feel like there’s so much room for unique pairings with Nutella,” Clare continued. “What if they tried Nutella and more of a savory thing? Who knows? I could see a sweet pasta-y thing … Well, maybe that’d be gross.” 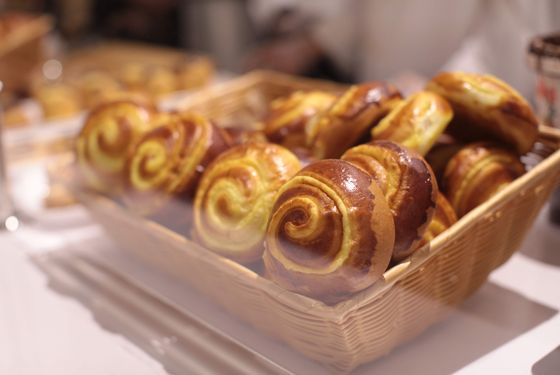 The final verdict: Out of five stars, Clare, Elektra, and Carolyn awarded it 4.5, and Jane gave it 4 (but her father did warn, “Don’t be so nice!”). “It was almost as good as I thought it was going to be,” Jane said. “I wouldn’t wait in a 30-minute line, but I’d definitely come back.” 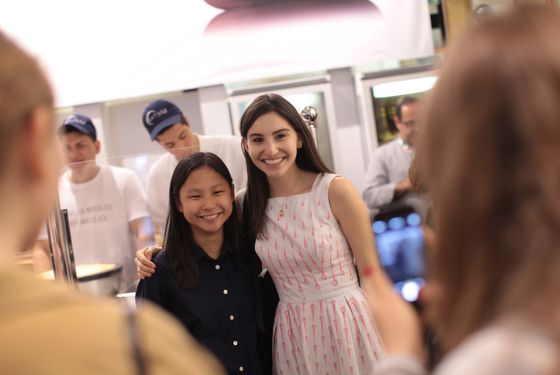 Jane and Sierra, in a state of post-tasting bliss.Photo: Melissa Hom 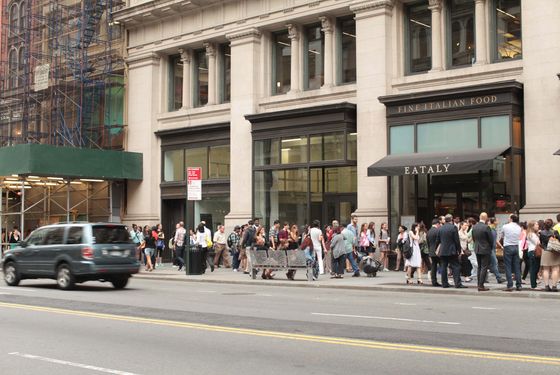 The line outside. To be fair, Eataly did give away free Nutella treats in honor of opening day.Photo: Melissa Hom

the year i ate new york Yesterday at 7:55 a.m.
My New Favorite Sushi Counter A secret omakase at an impressive value.
encounter May 25, 2022
Nakazawa, Minus the Sushi Jiro made him famous. Now the chef is headed in a new direction.
By Chris Crowley
underground gourmet quick bite May 24, 2022
Little Myanmar’s Burmese Pancake Is Street Food Worth Sitting Down For The new restaurant brings Burmese cuisine back to the East Village.
By Robin Raisfeld and Rob Patronite
report May 24, 2022
A Gun Buyback, Sponsored by Junior’s “For us in Brooklyn, it’s been our first really public-private partnership this way,” says Eric Gonzalez, the borough’s district attorney.
restaurant review May 23, 2022
At Patti Ann’s, the Kids’ Menu Is the Only Menu Pigs in a blanket and chicken-fried pork chops just like Mom never used to make.
By Adam Platt
the grub street diet May 20, 2022
Eliot Glazer Looks for a Crunchy Quesadilla “It’s like having that burnt cheese on a pizza.”
By Chris Crowley
the year i ate new york May 19, 2022
Is This Really the ‘Worst Steak in NYC’? Seeking out a surprisingly controversial special.
best in class May 18, 2022
11 of the Very Best Air Fryers Custard toast at the ready.
openings May 18, 2022
Nabila’s Will Be a Celebration of Lebanese Home Cooking A mother-son duo brings their malfouf, sheesh barak, loubieh bi zeit, and more to Brooklyn.
By Rachel Sugar
report May 18, 2022
Grubhub Offered New York ‘Free Lunch.’ Now New York Hates Grubhub. The delivery app’s promotion overwhelmed restaurant workers and angered hungry New Yorkers.
father's day 2022 May 17, 2022
The Best Gifts for Foodie Dads Foolproof ideas for the dad who says the quickest way to his heart is through his stomach.
report May 17, 2022
Demand for Sexy Cakes Is Surging Bakers say business is way, way up.
By Ella Quittner
ukraine invasion May 16, 2022
You Won’t Be Able to Get a Big Mac in Moscow Ever Again McDonald’s is pulling out of Russia entirely as Putin’s invasion of Ukraine drags on — ending an era that began with promise.
report May 16, 2022
The Best Bagels in the World? They Might Be on Long Island. Hot and fresh and just off Jericho Turnpike.
By Jason Diamond
the grub street diet May 13, 2022
Rick Martínez Enjoys a Big Gathering “My ultimate fear in life is that I’m going to have a party and no one’s going to show up.”
By Rachel Sugar
the year i ate new york May 12, 2022
Opening Night at the Potato Palace Daniel Boulud’s latest restaurant, Le Gratin, is a low-key affair, for now.
By Tammie Teclemariam
report May 11, 2022
The Fascinating Mystery of Anna Wintour’s ‘Go-to’ Lunch Can you even call this a salad?
By Emilia Petrarca
lawsuits May 10, 2022
Mario Batali Acquitted in Boston Assault Trial The chef still faces a civil suit.
By Rachel Sugar
commentary May 10, 2022
Nobody Wins When Cops Harass Fruit Vendors Outrage was sparked by the arrest of María Falcon, a street vendor who works in a Brooklyn subway station.
the underground gourmet May 10, 2022
This 86-Year-Old Nonna Is Known As the Pasta Machine “During the pandemic, I’d drop off flour outside her door and she’d give me pasta. It was like a drug deal.”
By Rob Patronite and Robin Raisfeld
More Stories