You know his work, but probably not his name. Photo: Courtesy of Simon Scott

Chances are that if you’ve had a pint of beer, maybe more, anywhere around town during the last eight or so years, you’ve come into direct contact with the work of Simon Scott. It’s in Puck Fair in Soho and the tony Brandy Library in Tribeca. At the Three Monkeys Bar in midtown west, just blocks from one of the most chaotic public places on earth, you’ll see Scott’s writing on the wall and ceiling, in passages that mention Shinto and monks. Elsewhere, Scott has done everything from full-color murals of Jameson bottles to illuminated script, and the list goes on: His work is in the Sixth Ward, the Mean Fiddler, Pig & Whistle, Tonic East, the Malt House, Mudville, Le French Diner, not to mention scores of non-boozy establishments like the Yorkville Creperie. It’s a very long list; here’s an incomplete one.

Three weeks ago, Scott, who is English, a former musician, and an equally prolific creative artist, had half a lung removed after being diagnosed with cancer. He had a kidney infection after that, and doctors then discovered a tumor on his cerebellum, which was removed. He is recovering, with courses of chemo and radiation already blocked out in the weeks ahead.

Kieran Blake, the general manager at Bowery Ballroom, first met Scott 15 years ago when Blake was pouring drinks at the legendary dive bar Siberia and the Englishman wandered into the establishment under the 50th Street subway stop as a tourist. Blake says the pair became close friends around eight years ago, when Scott moved to New York, and now he has organized a benefit to help offset Scott’s mounting medical bills. It’s hosted by Todd Barry and Dave Hill, and takes place on Sunday at Bowery Ballroom, starting at 4 p.m.. Tickets are $20 to $100, and in addition to raffles and auction packages put together by pubs and bars, a dozen or so bands will play, including a set from reunited band the Bogmen. Donations are also being accepted online at Sweet Relief.

In addition to his paintings and prints, here’s a link to some of Scott’s commercial work. Much of it has a blink-and-you’ll-miss-it quality, because Scott happens to be so versatile. “He started out painting menu boards,” Blake says, “giving them an aesthetic that matched the room. Now it’s kind of like bespoke art.” A look at some of Scott’s range, below.

A piece of plywood that hangs behind the bar at GMT looks like an immense slab of marble to everyone who sees it, which is Scott’s handiwork. He’s also responsible for the trio of family crests that hang above the entrance. 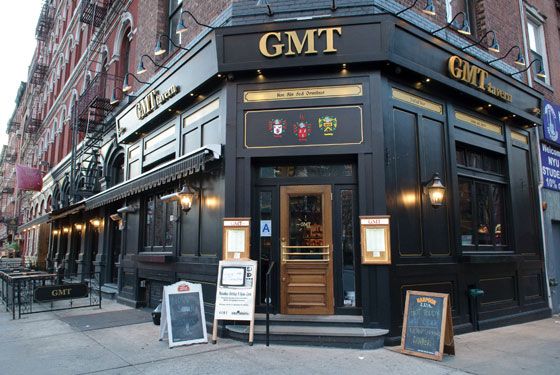 A piece of plywood that hangs behind the bar at GMT looks like an immense slab of marble to everyone who sees it, which is Scott’s handiwork. He’s also responsible for the trio of family crests that hang above the entrance. 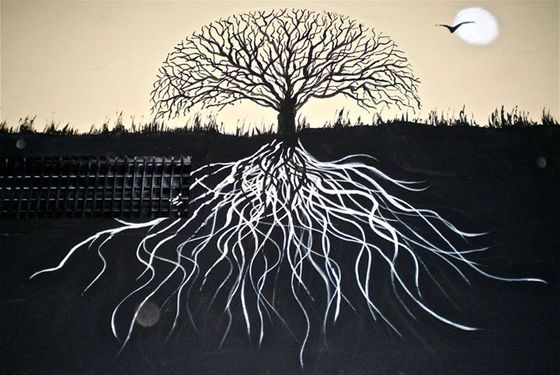 Signs at the Immigrant in the East Village. 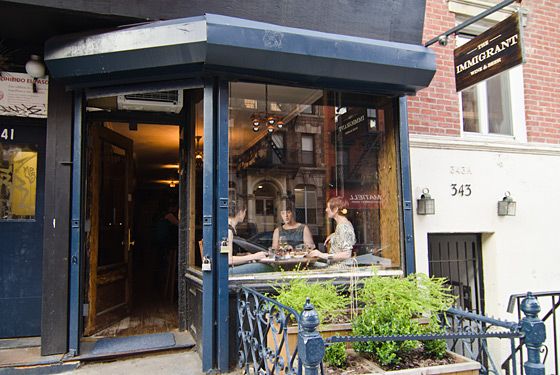 Signs at the Immigrant in the East Village.

This, of course, barely scrapes the surface. Simon Scott’s work is on display right there on the door at Passenger Bar in Williamsburg, all over at Epstein’s on the Lower East Side. It was in Nolita House and Nice Guy Eddie’s, and literally everywhere you look at the Brass Monkey, to the point that visiting a lineup of taverns where Scott has worked would make for the most intense New York City bar crawl of all time. Why not start off with a toast this Sunday?