This evening, Andrew Carmellini, Luke Ostrom, and Josh Pickard open their newest restaurant, a casual pasta shop in the old Noho spot recently vacated by Peels. There is a fourth partner here, though, 29-year-old chef Sal Lamboglia, a Bensonhurst native who has been working for Carmellini since his culinary school externship at A Voce. In the years since, Lamboglia has helped open every restaurant in the Noho Hospitality Group portfolio, from the Dutch Miami to the Sausage Boss concession at Madison Square Garden. But all along, Lamboglia has not-so-secretly pined for a little Italian restaurant of his own — one that would reflect his passion for the first-generation Italian-American food he grew up with. Tonight, he unveils it to the public — stuffed meatballs, his dad’s tomato sauce, and all.

How did you get your start in cooking?
My dad was a chef on Mulberry Street for about 35 years. He owned a restaurant for about seven or eight years on Hester Street called Assaggio. He worked around, at Angelo’s and Caffe Napoli. So I kind of had no choice. My dad would finish working and he’d bring home lobster fra diavolo and fried clams. My mom worked at a pastry shop right in our neighborhood, Alba, for years. And that’s where my uncle started working, and then my other aunts, so it’s kind of like a family affair back in Bensonhurst.

Did you work at your father’s restaurant?
No, I was about 5. When I was 20, before culinary school, we actually opened a pizzeria in Park Slope — Bene Pizza.

What’s your favorite pizza in New York?
My friend Frank owns Best Pizza out in Williamsburg. I like Frank’s pizza. And as far as pies go, I like Don Antonio, the guys from Kesté. I think that’s a pretty good margherita.

How did you come to work for Carmellini?
I actually met him at the James Beard Awards. I was a student and I really wanted to go to the awards and I went. I got all dressed up. I borrowed my cousin Sal’s really expensive pinstriped suit. It was probably just a bit too shiny for that night. And I ate probably, like, 15 duck meatballs just so I could hang out by the booth. We chatted for a few minutes, and he told me to come over and trail and I did. 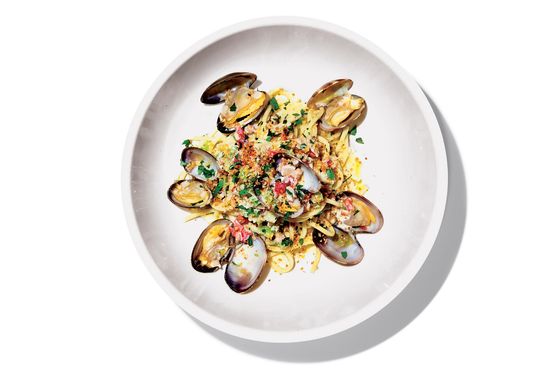 What did you say to him? How did you guys hit it off?
I told him I was a big fan of his. I had seen him make a plate of pasta on TV, and believe it or not, I said to him, “You know, chef, I saw you making that ravioli, and I can make it pretty good. I can make it just as good.” He’s like, “Really.” I was like, “Yeah.” He’s like, “Well, why don’t you come over and show me?”

So how did you get from there to Bar Primi?
They knew from day one that all I wanted to do was have a pasta shop or make pizza. If I made family meal it was, like, baked ziti, or it was something Italian. So throughout all these openings, I would always kinda, like, sit and talk, and chat with him about the future, and about hopefully one day having this pasta restaurant. And he mentioned, actually, Bar Primi — he mentioned the name to me, probably at Locanda Verde. But he knew if he told me too much, I would get way too excited and that’s all that I would focus on, which was right. And so every so often I would always be, like,
“Hey, that Bar Primi … ” He’s like, “Patience,” you know, “let’s just focus on Lafayette, or Joe’s Pub, or Dutch Miami, and then we’ll talk.”

Is there anything on Bar Primi’s menu you learned from your father?
There are a few things I’ll always take with me that I’ve adapted over the years. There’s this tomato sauce that’s in one of the dishes, and it’s very, very simple. My dad’s been making it for years. 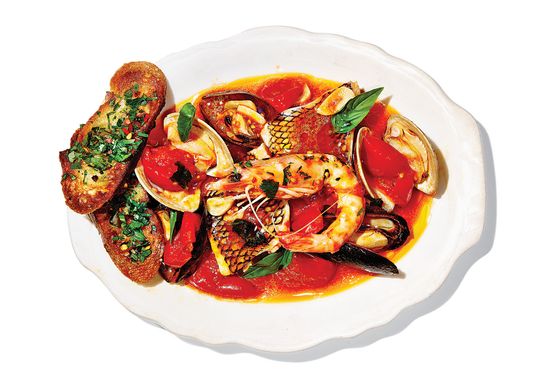 You have meatballs stuffed with Fontina on the menu. Is that your invention?
No, that was a collaboration. But I would take meatball heros to school and people wanted to buy them off me. I’d actually bring in some for the teachers — my gym teacher, my math teacher — whoever I think I wanted to treat me a little extra special.

Is your Wednesday special the same Sausage Boss sausage that Carmellini sells at Madison Square Garden?
Yes. Funny story about that: My dad actually works at the Garden. He’s now semi-retired, so, like, three years ago he wanted a part-time thing to keep busy. So I brought him over to the Garden after I was done training the staff how to make the sausages, and then I got my dad the gig over there to help oversee and supervise. So if you go over to the Garden, ask for Tony. He won’t say much unless you speak to him in Italian.

Here’s a first look at Lamboglia’s menu, the all-Italian wine list, and one more dish: 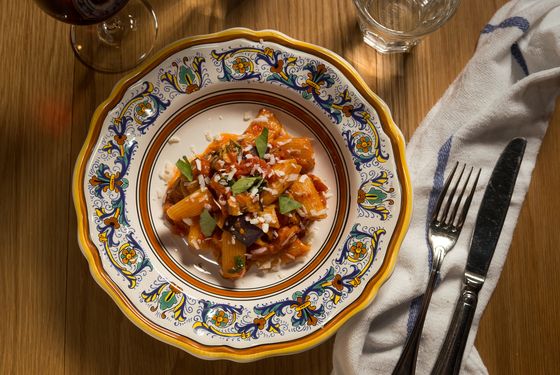 Why the Closing of New York’s Lexus Restaurant Is a Real Loss
Why the Closing of New York’s Lexus Restaurant Is a Real Loss
All closings »
shopping Yesterday at 1:24 p.m.
The Cervo’s Team Launches a Preserved-Seafood Line “Our love of anchovies and sardines runs pretty deep.”
openings Yesterday at 9:54 a.m.
Inside Mena, Victoria Blamey’s First-Ever Solo Restaurant The new project opens this week.
By Mahira Rivers
the grub street diet Jan. 21, 2022
Chef Alexander Smalls Always Says Yes to Duck Eggs “I graduated from quail to duck. For me, it’s a more fertile taste.”
By Chris Crowley
it's soup season Jan. 20, 2022
Everything You Need to Know About ‘Soup Mother’ A new name for an ancient approach to cooking — and something we all might want to try.
the food biz Jan. 19, 2022
Battle of the Roasted Garlic Achaars A Trader Joe’s knockoff has put condiment-maker Brooklyn Delhi in a pickle.
By Rob Patronite and Robin Raisfeld
killed it Jan. 18, 2022
It’s Time to Bid Adieu to Cooking With Paris Maybe Paris Hilton’s cooking show was just too complicated for a world that values easy answers.
endorsements Jan. 18, 2022
A Sharper, Snappier, Picklier Health Salad Poulet Sans Tête’s version goes heavy on the cucumbers and skips the sugar.
restaurant review Jan. 18, 2022
Dining and Dashing at Semma Attempting to savor South Indian delights during a COVID surge.
By Adam Platt
rip Jan. 15, 2022
Good-bye to Ed Schoenfeld, a Man Who Changed the Way New York Ate The restaurateur and food-world impresario has passed away.
By Adam Platt
urban forager Jan. 14, 2022
At Té Company, the Persimmons Are Hung Up to Dry “The old way of preserving ingredients — for me, it’s fascinating.”
the grub street diet Jan. 14, 2022
Starlee Kine Spends Lunch Breaks With Her Dog “For every human that left the city, it seems a dog has been added.”
By Rachel Sugar
reopening Jan. 13, 2022
How Bad Has Omicron Been for New York’s Restaurants? As with everything these days, it depends who you ask.
By Chris Crowley
closings Jan. 13, 2022
Why the Closing of New York’s Lexus Restaurant Is a Real Loss Against all odds, it served as a worthy passport to food from around the world.
By Joshua David Stein
gifts they might actually want Jan. 12, 2022
The Best Gifts for Beer Lovers, According to Brewers and Beer Lovers Because you can do better than a novelty beer helmet.
omicron Jan. 12, 2022
Now We Have to Worry About Groceries, Too? Store shelves are looking emptier for some very real reasons.
members only Jan. 12, 2022
New York’s First NFT Restaurant Is Coming Soon. Wait — What? You’ve got questions. We’ve got (some) answers.
best in class Jan. 11, 2022
25 of the Very Best Drinking Glasses Twenty-one interior designers and service-industry professionals weigh in on their favorite glasses for water, juice, iced tea, or something stronger.
By Dominique Pariso
reopening Jan. 10, 2022
The Restaurant Industry Has Always Treated Sick Workers With No Remorse Will anything change because of Omicron?
By Chris Crowley
the grub street diet Jan. 7, 2022
Actor Jeff Hiller Is Eating His Feelings “My husband does basically all of the cooking and I just reap the benefits.”
By Chris Crowley
reopening Jan. 6, 2022
Eric Adams Has Already Lost New York’s Restaurant Workers That was fast!
More Stories