After a week of previews, during which everyone from Marty Markowitz to Mario Batali came to pay respects and nosh on some smoked fish, the hotly anticipated Russ & Daughters Cafe opens to the public tomorrow. This is not only big news in bagel-and-lox circles, but a huge event in the course of New York gastronomic history. It isn’t every Lower East Side herring pushcart, after all, that grows up to become a local landmark and industry leader a century later, the standard by which all other Jewish-appetizing shops are measured.

The café, open every day except Tuesday, is part coffee shop and part cultural shrine, a high-low confluence of vinyl booths and Carrara-marble tabletops, borscht and caviar, seltzer and Champagne. Fourth-generation operators Niki Russ Federman and Josh Russ Tupper wanted key design elements to echo the East Houston Street headquarters, and they do, down to the light-box wall shelving and signage, and the open kitchen’s spotlit salmon-slicing station, which might be considered the heart of the operation.

The menu, too, is an elaboration, not a reinvention. The shop’s bagel sandwiches are reconceived as plated snacks, and smoked fish is served not only in the expected platters, but in an assortment of egg dishes and inventive salads. The drink list, created by Yana Volfson, late of Peels, is a perfect marriage of soda fountain and modern mixology, ranging from a buxar egg cream made with carob to a caraway-infused-vodka Bloody Mary with rye croutons. And when Federman tasted Massachusetts baker Gordie Weissman’s dense shissel rye (a round loaf, from the Yiddish word for “bowl”), she set him up in a commissary bakery in Queens. “His breads needed to be in New York,” she says. They’re in excellent company. 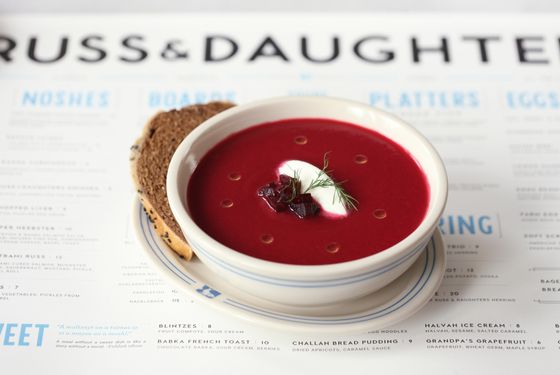 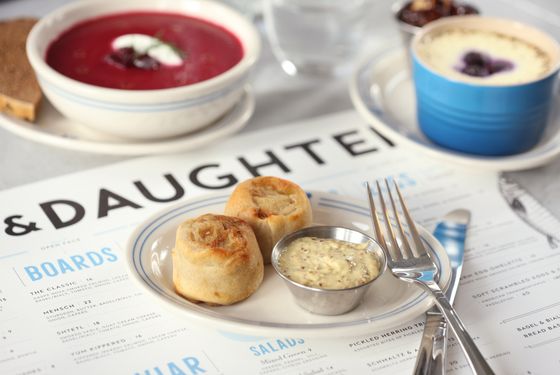 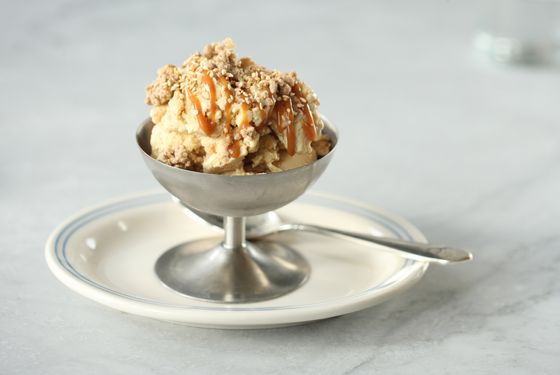 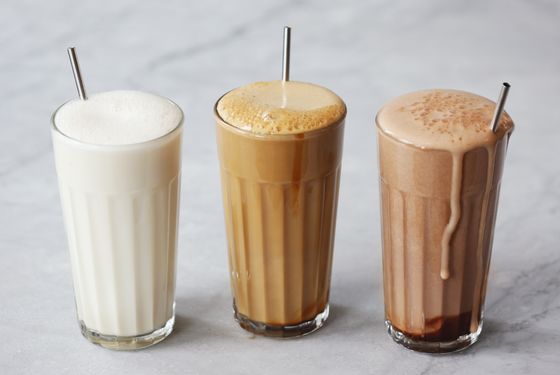 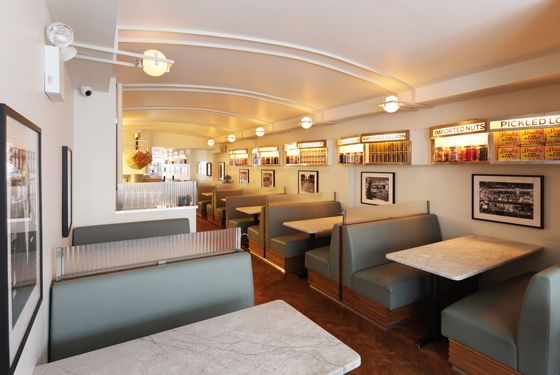 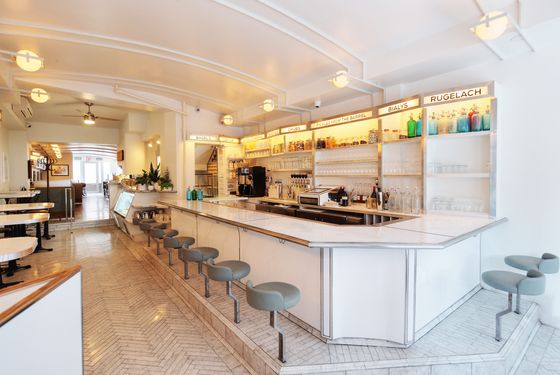 The baked-enamel counter and the herringbone-patterned marble floor.Photo: Melissa Hom 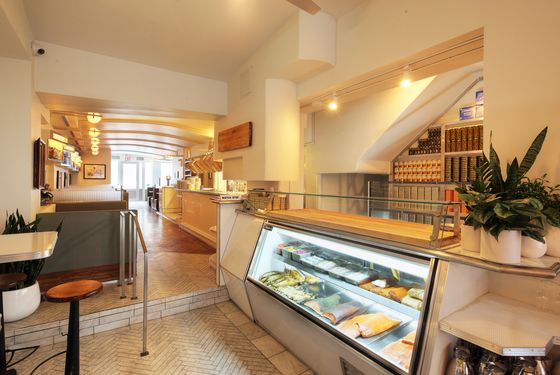 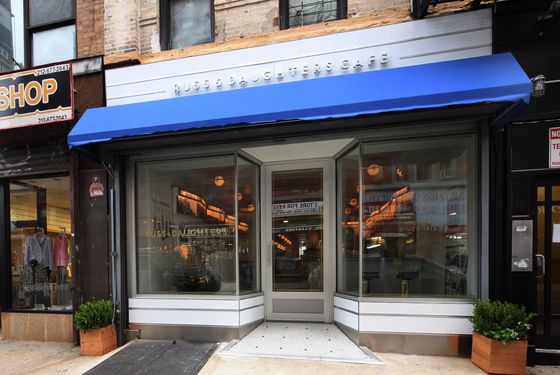 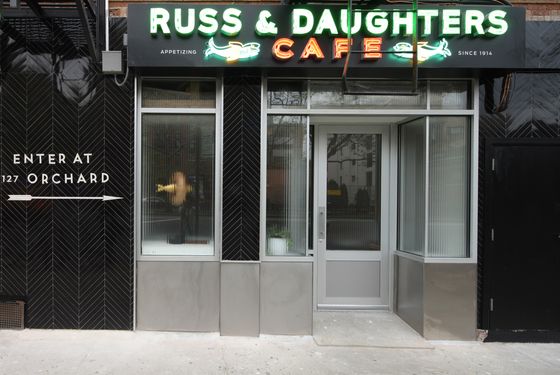 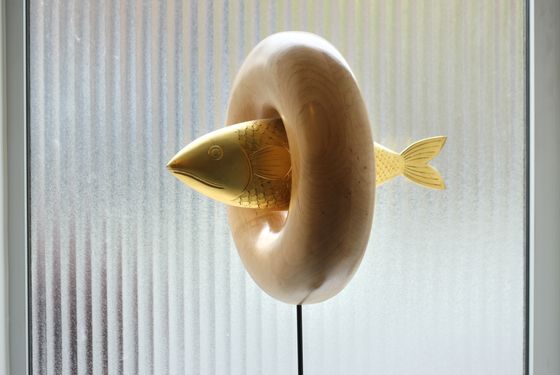 Milton Glaser designed this sculpture of a fish swimming through a bagel, which references his and Jerome Snyder’s 1968 New York Magazine cover story, “A Gentile’s Guide to Jewish Food.”Photo: Melissa Hom

presentation Yesterday at 8:55 a.m.
The New Minimalism Chefs are leaning into spare, simple plates.
By Chris Crowley
rip Dec. 5, 2022
Alain Sailhac, a Chef’s Chef to the End, Has Died “He knew it all.”
reasons to love new york Dec. 5, 2022
The Best Pizza in the World Can Be Found in One Square Mile of Williamsburg Any neighborhood would be lucky to have even one or two of these places. Here are eight.
reasons to love new york Dec. 5, 2022
Margaritaville Is the Chillest, Cheesiest Place in Town It’s bright, cacophonous fun.
By Rebecca Alter
reasons to love new york Dec. 5, 2022
We Will Wait a Very Long Time for a Suprême The latest and arguably greatest entry in New York’s croissant craze.
the grub street diet Dec. 2, 2022
Andy Baraghani Likes Some Lumps in His Potatoes “This recipe has three kinds of dairy — labneh, cream, and butter — which I don’t think is overkill.”
By Alan Sytsma
the year i ate new york Dec. 1, 2022
Chocolate and Cheese in the Bronx A post-Thanksgiving trip to Chocobar Cortes.
By Tammie Teclemariam
report Dec. 1, 2022
How New Yorkers Are Saving, Swapping, and Splurging on Groceries “You gotta close your eyes and put it in the cart.”
By Paula Aceves and Jane Starr Drinkard
moving Nov. 30, 2022
The Famously Tiny I Sodi Is Moving to Bigger Digs Rita Sodi’s beloved little dining room will move — and finally get a bit bigger.
openings Nov. 29, 2022
The Many Influences of Kwame Onwuachi The chef puts his own history on the menu at Tatiana.
By Tiffany Martinbrough
best in class Nov. 28, 2022
11 of the Very Best Air Fryers Custard toast at the ready.
feature Nov. 28, 2022
This Tasting Menu Tastes Like Pot A cross-country dive into high-flying, super-high dollar cannabis cuisine.
By Adam Platt
emergency discussion Nov. 22, 2022
The Menu Gets That Fine Dining Is a Cult Obscure location, insufferable clientele, and staff at the end of their rope — this horror-comedy’s got a lot in common with reality.
By Chris Crowley and Adam Platt
holiday gifts 2022 Nov. 21, 2022
The Best Gifts for Beer Lovers, According to Brewers and Beer Lovers Because you can do better than a novelty beer helmet.
profile Nov. 21, 2022
Scarr’s Pizza Is Expanding — and Adding a Sushi Counter How Scarr Pimentel became Orchard Street royalty.
By Tammie Teclemariam
the grub street diet Nov. 18, 2022
Jeremiah Moss Wishes Arturo’s Would Open Earlier “I feel like I’m betraying myself somehow when I eat nice food.”
By Alan Sytsma
the year i ate new york Nov. 17, 2022
Where to Watch the World Cup Our diner-at-large goes looking for that perfect 5 a.m. sports bar.
By Tammie Teclemariam
closings Nov. 15, 2022
Good-bye to Pearl, the Oyster Bar That Launched a Million Lobster Rolls “A perfect storm” of calamities led to the restaurant’s closing, according to owner Rebecca Charles.
By Steve Garbarino
openings Nov. 14, 2022
The Race to Finish Rockefeller Center’s Restaurants A handful of ambitious new spots are all vying for the attention of, well, everyone.
By Chris Crowley
the grub street diet Nov. 11, 2022
Margo Price Stops for Tacos in Texas and Katz’s in New York “Tonight we might get stoned and go eat a hot dog.”
By Alan Sytsma
More Stories