The main difference is that he now seems to have a lot more pockets: We’re counting four in the cargo pants, and at least three in the blazer. No other fast-food mascot has that many pockets, right? 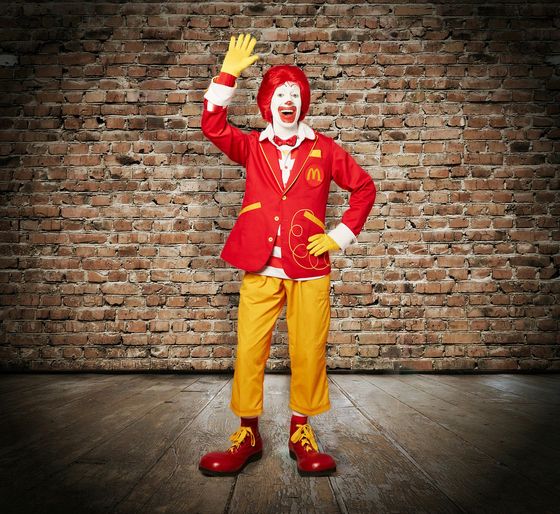 He’s really into that whole short inseam thing that was in Men’s Vogue.Photo: McDonald’s/flickr

“We’ve been working on his new clothes for probably close to two years,” David Zlotnik, McDonald’s director of global marketing, tells Ad Age. Unfortunately, it isn’t going to stop anyone from knocking the new digs as Ed Hardy-esque, or like something the sixth Doctor wore on Doctor Who. The other outfit is more sporty and involves a rugby shirt and a sleeveless vest. 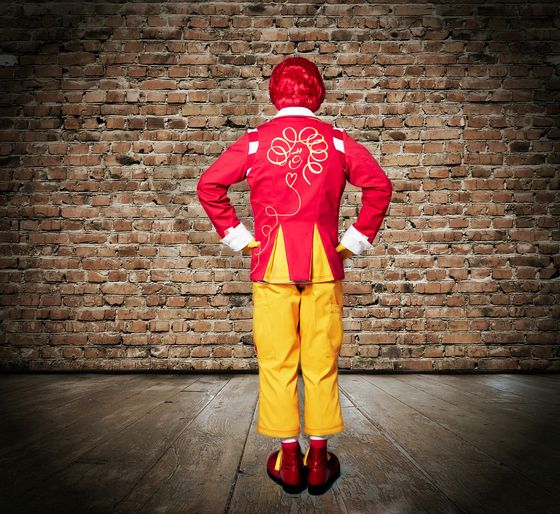 The company says its mascot is also about to start tweeting, and along with that comes the vague threat of Ronald McDonald selfies. For now, however, the fast-food giant has is encouraging the use of the #ronaldmcdonald hashtag, which probably isn’t going over on Twitter exactly as planned.

#RonaldMcDonald is going to start tweeting & posting on Facebook...he will also be in a new documentary called 'How to Catch a Predator'.

They put #RonaldMcDonald in a sleeveless vest, when did he become a hedge fund trader?— Georgetown Jack (@GTWNJACK) April 24, 2014

the grub street diet Yesterday at 6:00 a.m.
SNL’s Punkie Johnson Leaves the After-Party for Taco Bell “Taco Bell, for me, is an every-Saturday stop.”
By Alan Sytsma
the year i ate new york Dec. 8, 2022
Night One at the New Torrisi Major Food Group grows. Again.
By Tammie Teclemariam
openings Dec. 7, 2022
Every Pastry at the New K’Far in Brooklyn Oversize rugelach, pistachio sticky buns, and bourekias inspired by TGI Friday’s spinach dip.
By Joshua David Stein
presentation Dec. 6, 2022
The New Minimalism Chefs are leaning into spare, simple plates.
By Chris Crowley
rip Dec. 5, 2022
Alain Sailhac, a Chef’s Chef to the End, Has Died “He knew it all.”
reasons to love new york Dec. 5, 2022
The Best Pizza in the World Can Be Found in One Square Mile of Williamsburg Any neighborhood would be lucky to have even one or two of these places. Here are eight.
reasons to love new york Dec. 5, 2022
Margaritaville Is the Chillest, Cheesiest Place in Town It’s bright, cacophonous fun.
By Rebecca Alter
reasons to love new york Dec. 5, 2022
We Will Wait a Very Long Time for a Suprême The latest and arguably greatest entry in New York’s croissant craze.
the grub street diet Dec. 2, 2022
Andy Baraghani Likes Some Lumps in His Potatoes “This recipe has three kinds of dairy — labneh, cream, and butter — which I don’t think is overkill.”
By Alan Sytsma
the year i ate new york Dec. 1, 2022
Chocolate and Cheese in the Bronx A post-Thanksgiving trip to Chocobar Cortes.
By Tammie Teclemariam
report Dec. 1, 2022
How New Yorkers Are Saving, Swapping, and Splurging on Groceries “You gotta close your eyes and put it in the cart.”
By Paula Aceves and Jane Starr Drinkard
moving Nov. 30, 2022
The Famously Tiny I Sodi Is Moving to Bigger Digs Rita Sodi’s beloved little dining room will move — and finally get a bit bigger.
openings Nov. 29, 2022
The Many Influences of Kwame Onwuachi The chef puts his own history on the menu at Tatiana.
By Tiffany Martinbrough
best in class Nov. 28, 2022
11 of the Very Best Air Fryers Custard toast at the ready.
feature Nov. 28, 2022
This Tasting Menu Tastes Like Pot A cross-country dive into high-flying, super-high dollar cannabis cuisine.
By Adam Platt
emergency discussion Nov. 22, 2022
The Menu Gets That Fine Dining Is a Cult Obscure location, insufferable clientele, and staff at the end of their rope — this horror-comedy’s got a lot in common with reality.
By Chris Crowley and Adam Platt
holiday gifts 2022 Nov. 21, 2022
The Best Gifts for Beer Lovers, According to Brewers and Beer Lovers Because you can do better than a novelty beer helmet.
profile Nov. 21, 2022
Scarr’s Pizza Is Expanding — and Adding a Sushi Counter How Scarr Pimentel became Orchard Street royalty.
By Tammie Teclemariam
the grub street diet Nov. 18, 2022
Jeremiah Moss Wishes Arturo’s Would Open Earlier “I feel like I’m betraying myself somehow when I eat nice food.”
By Alan Sytsma
the year i ate new york Nov. 17, 2022
Where to Watch the World Cup Our diner-at-large goes looking for that perfect 5 a.m. sports bar.
By Tammie Teclemariam
More Stories