This week, word spread that Per Se, Thomas Keller’s ultra-high-end restaurant, received an excruciating 42 points during its most recent health inspection. It currently has a “grade pending” while the staff addresses the issues and Keller awaits a hearing on the grade. The media loved this story: NBC ran with “Exclusive NYC Restaurant, Per Se, Gets Enough Health Violations for “C” Grade.” The Guardian went with the less-accurate “Michelin-starred restaurant Per Se earns ‘C’ grade from health inspectors.” These headlines, and the many others like them, all imply the same thing: Fancy-Ass Restaurant Is Dirty As Hell. But the reality is that as a medium, the confusion between letter grades and violations points has less to do with any immediate threat to diners and more to do with the the health department’s inscrutable rules. And the agency’s online reports are so opaque that they don’t offer diners, or restaurants, any useful information.

Let’s start with the obvious: Per Se is not a “dirty” restaurant. The culture in any high-end, brigade-style kitchen is not only fundamentally one of cleanliness, but one of mutual policing. When a one cook peels a carrot, his chef de partie is going to make sure that carrot’s being peeled over a bowl to catch the shavings, because no one wants to incur the wrath of a sous chef. But it’s not just about hierarchy: If a bit of paper towel falls on the floor from a cook’s station, it might be the dishwasher tapping him on the shoulder to make sure it gets picked up. Everything is labeled, everything is sanitized. The kitchen gets a deep clean on a nightly basis; the plancha is literally sanded down to its original luster. This is how it works: Sloppy kitchen employees stand out, and the rest of the staff will have no problem letting them know they don’t belong.

So how did Per Se receive enough inspection points to warrant such a terrible grade? The report — which cannot be linked to directly — doesn’t offer a very clear picture: 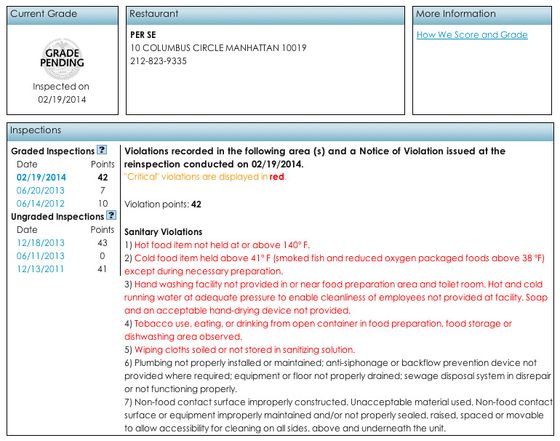 The February 19 inspection was actually a follow-up to an earlier inspection in December. Here’s the list of violations from that report:

It’s difficult to glean any real information from either of those write-ups, or to identify what’s really “wrong” in Per Se’s kitchen. Someone was eating or smoking or drinking or possibly chewing tobacco somewhere in the kitchen? Was it the presence of a drink, or a drink without a lid, that was the issue? Were the kitchen towels soiled, or were they just not being stored in sanitizing solution? What’s more: Will people paying $500 apiece for dinner care that there’s apparently a plumbing issue with one of the sinks, or that a “non-food contact surface” was “improperly constructed”?

Per Se isn’t the only famous restaurant to deal with seemingly arbitrary health-department rules recently. Di Fara Pizza in Brooklyn was also inspected last month, and accrued a walloping 42 points. The violation that accrued the most points: “Toilet facility not provided for employees or for patrons when required.”

That doesn’t sound too happy at all, until you think about what it really means. Restaurants with fewer than 20 seats are not required to provide a public restroom. But Di Fara can get crowded, so the owners bought extra seats to use when it’s really jammed. And so, the solution to Di Fara’s no-toilet violation isn’t to install a toilet; it’s to get rid of some of its chairs, which they plan to do.

But anyone who shows up at Di Fara won’t see that. All they see is a letter, or “Grade Pending,” which could mean anything. Because Di Fara has had its share of more serious food-safety-related violations, a “Grade Pending” sign seems ominous.

For a restaurant like Per Se, responding to these kinds of issues is time-consuming, but for a small restaurant like Di Fara, it poses an actual risk to the well-being of the business itself. It is of course important to have a system in place to make sure our city’s restaurants are clean. But the health department owes both diners and restaurateurs a clearer, more transparent system that actually provides useful information to the people it impacts most.

Why the Closing of New York’s Lexus Restaurant Is a Real Loss
Why the Closing of New York’s Lexus Restaurant Is a Real Loss
All closings »
reopening 1:29 p.m.
The Rise and Fall of Anton’s 25 Cent Martinis “Nobody wants to mess with the SLA.”
shipwreck! 11:54 a.m.
Highly Anticipated Cookbook Delayed Because … It Probably Sank The supply chain has literally collapsed.
faqs Yesterday at 12:15 p.m.
What to Do If a Famous Anti-Vaxxer Walks Into the Restaurant Where You’re Eating Recent news suggests not all New York City restaurants are following vaccination regulations.
shopping Jan. 24, 2022
The Cervo’s Team Launches a Preserved-Seafood Line “Our love of anchovies and sardines runs pretty deep.”
openings Jan. 24, 2022
Inside Mena, Victoria Blamey’s First-Ever Solo Restaurant The new project opens this week.
By Mahira Rivers
the grub street diet Jan. 21, 2022
Chef Alexander Smalls Always Says Yes to Duck Eggs “I graduated from quail to duck. For me, it’s a more fertile taste.”
By Chris Crowley
it's soup season Jan. 20, 2022
Everything You Need to Know About ‘Soup Mother’ A new name for an ancient approach to cooking — and something we all might want to try.
the food biz Jan. 19, 2022
Battle of the Roasted Garlic Achaars A Trader Joe’s knockoff has put condiment-maker Brooklyn Delhi in a pickle.
By Rob Patronite and Robin Raisfeld
killed it Jan. 18, 2022
It’s Time to Bid Adieu to Cooking With Paris Maybe Paris Hilton’s cooking show was just too complicated for a world that values easy answers.
endorsements Jan. 18, 2022
A Sharper, Snappier, Picklier Health Salad Poulet Sans Tête’s version goes heavy on the cucumbers and skips the sugar.
restaurant review Jan. 18, 2022
Dining and Dashing at Semma Attempting to savor South Indian delights during a COVID surge.
By Adam Platt
rip Jan. 15, 2022
Good-bye to Ed Schoenfeld, a Man Who Changed the Way New York Ate The restaurateur and food-world impresario has passed away.
By Adam Platt
urban forager Jan. 14, 2022
At Té Company, the Persimmons Are Hung Up to Dry “The old way of preserving ingredients — for me, it’s fascinating.”
the grub street diet Jan. 14, 2022
Starlee Kine Spends Lunch Breaks With Her Dog “For every human that left the city, it seems a dog has been added.”
By Rachel Sugar
reopening Jan. 13, 2022
How Bad Has Omicron Been for New York’s Restaurants? As with everything these days, it depends who you ask.
By Chris Crowley
closings Jan. 13, 2022
Why the Closing of New York’s Lexus Restaurant Is a Real Loss Against all odds, it served as a worthy passport to food from around the world.
By Joshua David Stein
gifts they might actually want Jan. 12, 2022
The Best Gifts for Beer Lovers, According to Brewers and Beer Lovers Because you can do better than a novelty beer helmet.
omicron Jan. 12, 2022
Now We Have to Worry About Groceries, Too? Store shelves are looking emptier for some very real reasons.
members only Jan. 12, 2022
New York’s First NFT Restaurant Is Coming Soon. Wait — What? You’ve got questions. We’ve got (some) answers.
best in class Jan. 11, 2022
25 of the Very Best Drinking Glasses Twenty-one interior designers and service-industry professionals weigh in on their favorite glasses for water, juice, iced tea, or something stronger.
By Dominique Pariso
More Stories