As with anything, they are excellent with Sriracha and lime juice. Photo: Hugh Merwin

Recently, in food circles, there had been whispers of a vegetable called lollipop kale, supposedly a mythological-sounding cross between Russian red kale leaves and conventional Brussels sprouts. They cooked, and tasted, like both vegetables, and looked like they’d sprung from the mind of Dr. Seuss. In short, the sprouts seemed destined for culinary superstardom in the near future, the kind of thing you first notice on great menus and then, a few months later, on every good menu. But when I asked around, chef-friends pleaded ignorance. Some doubted they were even real. Sarah Kessler, a friend at Manhattan Fruit Exchange who sells specialty produce, said they sounded familiar and she’d try to get some, but a few weeks in, the chase started to feel hopeless. “We tried last night and will try tonight,” read one of Kessler’s emails. “This item has done this for a while,” she wrote in another. “Comes around, then disappears.” Was I hunting for kale, or Bigfoot?

Internet searches offered the origin story: A British company called Tozer Seeds developed the hybrid and sold it exclusively at department store Marks & Spencer in 2010, under the name Flower Sprouts. Vegetable message boards (yes, those exist) indicated the seeds had actually been available for years, but home gardeners were turned off by the relatively high cost ($11 for 40 seeds) and the long growing period, which can stretch up to four or five months.

Finally, on Twitter, I found proof that a handful of chefs were using it in San Francisco. Eventually, I was led to Salad Savoy, a 30-year-old producer in Salinas, California, that currently markets the sprouts under the trade name Lollipops. Bingo. Soon, with Kessler’s help, I had a case of Lollipops en route to my apartment in Brooklyn.

The four-pound box that showed up contained about 250 individual sprouts. They looked a little like Brussels sprouts that had gone on a diet: slender, with purple stalks and green leaves that turned out to be chewy and appealingly bittersweet. I cooked them every way I could think to: pan-roasted, with kimchi puree and brown butter; julienned and tossed with fish sauce, lime, and green chiles; roasted into tiny little kale chips; simply steamed; roasted. There was no bad way to use them. 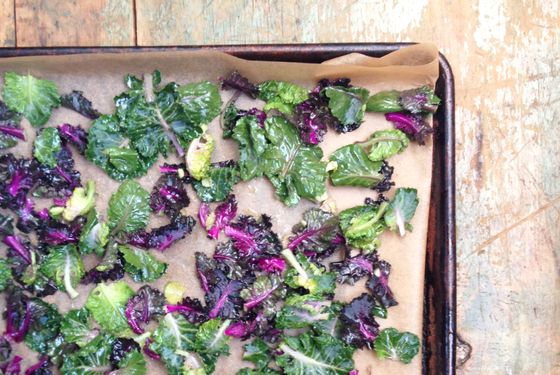 Part of the cooking appeal is that the sprouts belong to Brassica oleracea, the same plant species that’s responsible for hot-ticket veggies like collard greens, cauliflower, kohlrabi, and — of course — kale and Brussels sprouts. In other words, it’s all of the ingredients that fill restaurant menus and food-magazine pages alike. Farmers, aware of oleracea’s appeal, are constantly cross-breeding the species’ characteristics to try to create the next big thing. It was only a matter of time before someone hit upon a kale-Brussels combo that clicked.

But if the Lollipop sprouts were so versatile and essentially mashed up the best parts of two much-loved foods, why weren’t more chefs using them? They seemed to perfectly fit a niche in the menu ecology.

Turns out there’s at least one major roadblock: Lollipop kale sprouts are a hassle to grow. “It’s a very intensive and difficult crop,” says John Moore, the founder of Salad Savoy. Moore first learned about the crop in 2012, and he got some seeds to test out. “We didn’t know what to expect,” he says. What he discovered is that the sprouts take about twice as long to grow as many other crops (meaning the land set aside for Lollipops can only yield half as much product per year), and they require some novel kale-rearing techniques.

“There are certain things you can do to tickle the plant,” Moore says. “To get it a little excited.” Wait — plant tickling? “That’s not street terminology, okay, it’s my terminology,” Moore tells me. “It’s a way of saying that we’re naturally going through a process of trimming, topping the plant, recognizing a time to hold back water, time to push water. Accelerating and decelerating growth, to keep it from bolting.” 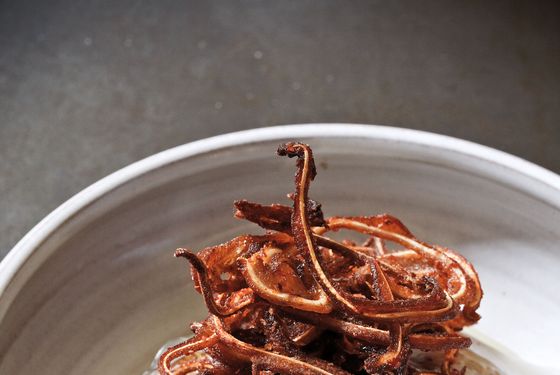 Moore is still working out his year-round sales strategies, but the time appears to be right for kale sprouts: Supply is opening up just as kale awareness and Brussels love are at an all-time zenith. California grocery stores and specialty produce outlets (such as Melissa’s and Manhattan Fruit Exchange) occasionally sell the sprouts directly to customers, and Trader Joe’s, which is notoriously tight-lipped about sourcing and suppliers, is rumored to be picking them up soon. In addition to Moore’s Lollipops, a Florida grower markets the veggie as BrusselKale, and Tozer — the original British grower — confirms there are plans in place to bring its Flower Sprouts to American supermarkets.

That leaves restaurant menus: Kale sprouts haven’t shown up on New York menus (Kessler says her company sold some to Kristian Meixner, chef of Carnegie Hall’s Citi Cafe, but that’s about it), though they’re starting to gain steam in California. Michael Voltaggio, who’s been serving the sprouts for two years, is a Lollipop pioneer. “We loved it instantly,” he says. He currently serves the sprouts at his restaurant, Ink, in a dish of sliced pigs’ ears with crème fraîche and togarashi. In Oakland, chef Rocky Maselli serves them at A16 with black cod, saffron sauce, and clams. At 1760, chef Adam Tortosa — who worked for Voltaggio at Ink — offers them sautéed with guanciale, lemon, and soy sauce. “I think it’s is kind of cool that it’s not super-widely available and it’s not on every menu,” Tortosa says. “But the most important thing is that it’s delicious.”