It’s no Dumb Starbucks, but here’s a clever vegan pop-up made to look like Taco Bell called “Taco Beyond,” which Foodbeast reports appeared in the middle of California’s Natural Products Expo West last week.

It turns out that faux-chicken and -beef maker Beyond Meat was beyond the guerrilla marketing stunt. As the photo above, taken by Cruelty-Free Culture, shows, the vendor’s booth was adorned with copycat Taco Bell signs. Company co-founder Brent Taylor told passersby that his aim was to “spam the fast-food giant’s social media” in hopes that Taco Bell would use their vegan meat in future menu items.

“We’ll probably get a cease-and-desist letter,” Beyond Meat’s COO Tony Prudhomme guessed, but despite expogoers’ heads up to Taco Bell corporate, the corporation is remaining silent. 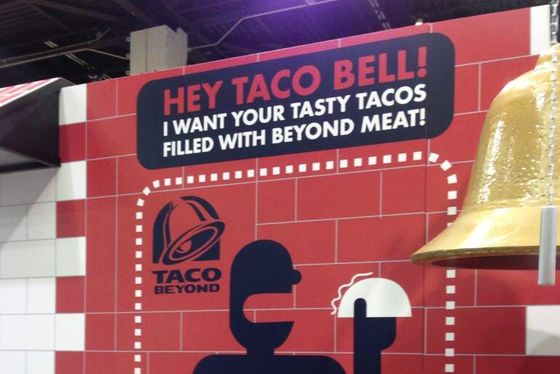 It’s worth pointing out that Beyond Meat has name recognition already. It snagged Twitter co-founder Biz Stone’s backing and a few bucks from Bill Gates.