Starting this weekend, general manager Eamon Rockey and chef Bryce Shuman of Betony, which nabbed three stars from New York Times critic Pete Wells, as well as “Best Restaurant of the Year” honors from Esquire last fall, will begin dinner service on Sundays. Betony will be open from 5:30 p.m. to 10 p.m. for the first time, and Shuman has added a bunch of new dishes to the menu, including the foie gras terrine with sesame and parsnip seen above. 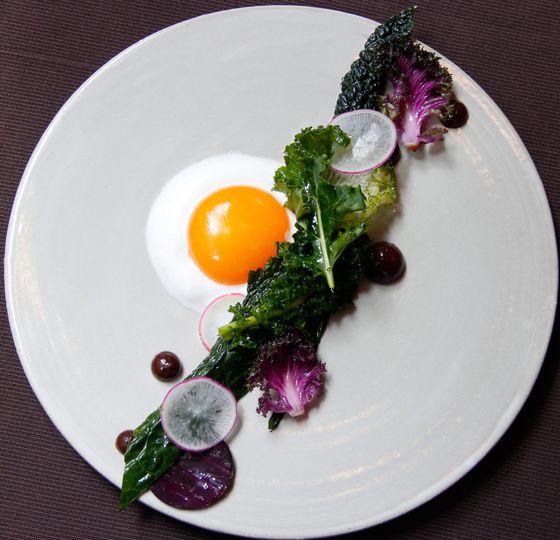 Here’s the cruciferous vegetable salad with egg and goat cheese, which has all kinds of brassica charm. Those tiny purple and white leaves fringed with dark green crispy edges? That’s Lollipop kale. The “egg white” in the center of the plate, it should be mentioned, is really a ring of smoked chèvre forming the base underneath that yolk, which has been pickled.

Other new items include a poached monkfish course with beet “raisins” and bone broth, and a dessert made with passion fruit, ginger, and cilantro.

the year i ate new york 10:10 a.m.
Who Are All These People Eating on DeKalb? It might be the most confusingly busy restaurant stretch in the city.
By Tammie Teclemariam
openings Yesterday at 10:53 a.m.
At Pecking House, the Line Is Finally Manageable You don’t have to wait for New York’s hottest fried chicken anymore.
By Chris Crowley
openings Sept. 19, 2022
Urban Hawker Brings Singapore to Midtown Inside the new food hall, which features 11 vendors from the island nation.
By Mahira Rivers
best in class Sept. 16, 2022
11 of the Very Best Air Fryers Custard toast at the ready.
the grub street diet Sept. 16, 2022
Karen Chee Is Looking Forward to Her Morning Egg “Peeling the shell is like unwrapping a gift.”
By Rachel Sugar
the year i ate new york Sept. 15, 2022
What’s Wrong With Cocktails Right Now? Bartenders and drinkers both seem a bit bored.
By Tammie Teclemariam
rip Sept. 14, 2022
RIP to the Wine Genius Who Created Two-Buck Chuck Fred Franzia had a way with words too.
gifts they might actually want Sept. 14, 2022
The Best Gifts for Beer Lovers, According to Brewers and Beer Lovers Because you can do better than a novelty beer helmet.
openings Sept. 14, 2022
A Le Coucou Chef Has Taken Over at Manhatta Justin Bogle breaks down the technique on a dozen new dishes.
By Joshua David Stein
report Sept. 12, 2022
Why Have Restaurant Menus Gotten So Simple? Call it the great pare-down.
By Chris Crowley
the grub street diet Sept. 9, 2022
Emma Steiger Eats Dinner at 3:30 — and Again at 10:45 “Even when we ordered, we knew it was too much food.”
By Alan Sytsma
reopening Sept. 8, 2022
Great N.Y. Noodletown Makes Its Triumphant Return A long-delayed reopening has finally happened.
By Chris Crowley
rsvp Sept. 7, 2022
What It’s Really Like Inside a Blindfolded Dinner “The customer is really surrendering to the chef — it’s a lot of trust.”
By Megan Paetzhold
cooking Sept. 6, 2022
The Dinner Party Is Over No more cleaning up.
By Emily Sundberg
the grub street diet Sept. 2, 2022
Galen Druke Has Been Getting Into Protein Shakes “This is probably the most embarrassing part of my diet I’ll admit to, so I might as well get it out of the way up front.”
By Zach Schiffman
the year i ate new york Sept. 1, 2022
Pretending to Vacation in Bushwick Reliving my early 20s during the last unofficial week of summer.
By Tammie Teclemariam
commentary Aug. 31, 2022
Should You Still Pay For Dinner If You Were Robbed While You Ate It? An etiquette question for the age of outdoor dining.
fall preview 2022 Aug. 29, 2022
The New Restaurants You Need to Know About So many openings.
By Alan Sytsma
the grub street diet Aug. 26, 2022
Morgan Jerkins Buys Her Snacks Before the Edibles Hit “Who wants to walk around the corner when you’re really stoned?”
By Alan Sytsma
openings Aug. 25, 2022
A New Chophouse Is Opening in Brownstone Brooklyn Gus’s debuts next week in Carroll Gardens.
By Andrea Strong
More Stories