Also, who charges $20 for an Old Fashioned? Photo: If You Can’t Afford to Tip

So it’s February 2014, and here we thought the days of receipt sermonizing and high-stakes tipping controversies were past us, but no, here’s a new one: Las Vegas-based writer Xania Woodman was apparently served an Old Fashioned that was shaken instead of stirred over the weekend, so she posted a photo of her receipt. In it, in place of an actual tip, was the simple admonishment “Don’t shake Old Fashioneds.” And some commentary: “It’s a shame, too,” Woodman wrote. “His bartender outfit was so promising.”

Newton’s law of Internet Receipt Inertia dictates that any time someone expends the energy to post a photograph of a piece of paper online, someone else will expend an equal and possibly opposite amount of energy being outraged about it. This one turned particularly vituperative.

Someone came across Woodman’s posting and send it to If You Can’t Afford to Tip, the online clearinghouse for service-industry grievances. Comments from readers include suggestions that Woodman “needs to be slapped.” Another wrote that he hopes the writer “chokes” on her next drink. Other readers posted Woodman’s contact information online — nasty business.

Yet other, less bullying comments called the receipt’s authenticity into question, pointing out that Woodman’s photo was of the bar’s “Customer Copy,” the implication being that she actually did leave a tip and that her posting was meant only to be taken as a cheeky cocktail-culture joke. In the meantime, Woodman has apparently deleted her Facebook account and protected her Twitter account.

We asked New York Times spirits writer Robert Simonson, who has a book devoted exclusively to the subject coming out in May, if there would ever be any real-world scenarios where a bartender might want to shake an Old Fashioned instead of a good stirring. Here’s what he had to say about that.

You don’t shake an Old-Fashioned, any more than you shake a Manhattan or a Martini. It’s a stirred drink. Moreover, an Old Fashioned is built in the glass it’s served in. That said, while I admire the writer’s standards regarding this excellent cocktail, I don’t endorse her making the point by denying a bartender a tip. If you’re unhappy with your Old-Fashioned because it was shaken, say so, and ask for a new drink. 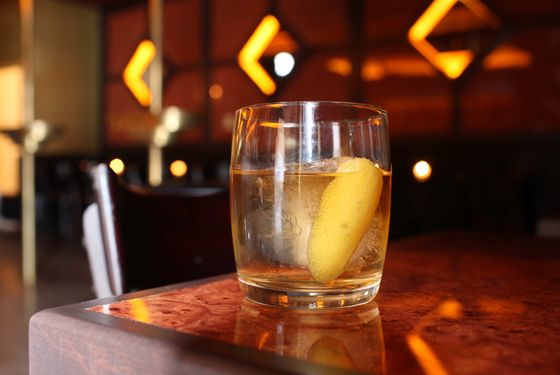 Even the Benton’s Old Fashioned at Golden Cadillac is stirred.Photo: Melissa Hom

Two things we learned today: It’s always okay to send a drink back to the bartender, and maybe it’s time for everyone to go paperless with the receipts, just so we can all stay level-headed out there on both sides of the bar.

presentation 15 mins ago
The New Minimalism Chefs are leaning into spare, simple presentations.
By Chris Crowley
rip Yesterday at 12:45 p.m.
Alain Sailhac, a Chef’s Chef to the End, Has Died “He knew it all.”
reasons to love new york Yesterday at 8:00 a.m.
The Best Pizza in the World Can Be Found in One Square Mile of Williamsburg Any neighborhood would be lucky to have even one or two of these places. Here are eight.
reasons to love new york Yesterday at 8:00 a.m.
Margaritaville Is the Chillest, Cheesiest Place in Town It’s bright, cacophonous fun.
By Rebecca Alter
reasons to love new york Yesterday at 8:00 a.m.
We Will Wait a Very Long Time for a Suprême The latest and arguably greatest entry in New York’s croissant craze.
the grub street diet Dec. 2, 2022
Andy Baraghani Likes Some Lumps in His Potatoes “This recipe has three kinds of dairy — labneh, cream, and butter — which I don’t think is overkill.”
By Alan Sytsma
the year i ate new york Dec. 1, 2022
Chocolate and Cheese in the Bronx A post-Thanksgiving trip to Chocobar Cortes.
By Tammie Teclemariam
report Dec. 1, 2022
How New Yorkers Are Saving, Swapping, and Splurging on Groceries “You gotta close your eyes and put it in the cart.”
By Paula Aceves and Jane Starr Drinkard
moving Nov. 30, 2022
The Famously Tiny I Sodi Is Moving to Bigger Digs Rita Sodi’s beloved little dining room will move — and finally get a bit bigger.
openings Nov. 29, 2022
The Many Influences of Kwame Onwuachi The chef puts his own history on the menu at Tatiana.
By Tiffany Martinbrough
best in class Nov. 28, 2022
11 of the Very Best Air Fryers Custard toast at the ready.
feature Nov. 28, 2022
This Tasting Menu Tastes Like Pot A cross-country dive into high-flying, super-high dollar cannabis cuisine.
By Adam Platt
emergency discussion Nov. 22, 2022
The Menu Gets That Fine Dining Is a Cult Obscure location, insufferable clientele, and staff at the end of their rope — this horror-comedy’s got a lot in common with reality.
By Chris Crowley and Adam Platt
holiday gifts 2022 Nov. 21, 2022
The Best Gifts for Beer Lovers, According to Brewers and Beer Lovers Because you can do better than a novelty beer helmet.
profile Nov. 21, 2022
Scarr’s Pizza Is Expanding — and Adding a Sushi Counter How Scarr Pimentel became Orchard Street royalty.
By Tammie Teclemariam
the grub street diet Nov. 18, 2022
Jeremiah Moss Wishes Arturo’s Would Open Earlier “I feel like I’m betraying myself somehow when I eat nice food.”
By Alan Sytsma
the year i ate new york Nov. 17, 2022
Where to Watch the World Cup Our diner-at-large goes looking for that perfect 5 a.m. sports bar.
By Tammie Teclemariam
closings Nov. 15, 2022
Good-bye to Pearl, the Oyster Bar That Launched a Million Lobster Rolls “A perfect storm” of calamities led to the restaurant’s closing, according to owner Rebecca Charles.
By Steve Garbarino
openings Nov. 14, 2022
The Race to Finish Rockefeller Center’s Restaurants A handful of ambitious new spots are all vying for the attention of, well, everyone.
By Chris Crowley
the grub street diet Nov. 11, 2022
Margo Price Stops for Tacos in Texas and Katz’s in New York “Tonight we might get stoned and go eat a hot dog.”
By Alan Sytsma
More Stories