Most fast-food roll-outs are shrouded in secrecy, limited to test-marketing sites in far flung cities like Dubuque and Radium Town, Oklahoma. But Frito-Lay chose a handful of Beltway-area 7-Eleven shops, apparently, to test its new and possibly transgressive “Doritos Loaded” option. From the look of it, the next frontier in the United States of Doritofication seems to be equal parts tortilla-chip and proprietary spice dust, a rougish dash of taquito DNA, and three parts neon mozzarella.

The Doritos Loaded things are the same size and shape as paper footballs, but apparently more edible. Intrepid taste-taster Kevin Cobb, who happens to be a committed consumer of Doritos, tells Yahoo Food that he would order the cheese-stuffed chips again, adding that he’d hoped they be crispier. The puck-like snacks taste “like nacho cheese Doritos dipped in queso,” he says. 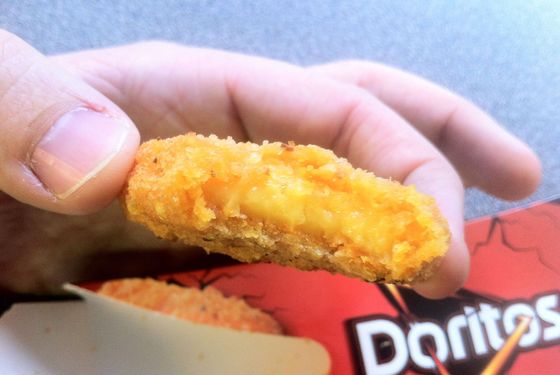 When life gives you nacho cheese, and all that.Photo: Kevin Cobb/Twitter

A spokesperson for 7-Eleven tells Grub Street that the limited Doritos Loaded launch in Washington, D.C. is “just a test,” adding that the chain is not yet ready to “talk publicly about the product.” In the meantime, convenience-store patrons are advised to be on the lookout for Cool Ranch Doritos Loaded snacks stuffed with Mountain Dew Cheese, if not just for the fact that their existence is entirely within the realm of possibility.