John Besh has an equally low tolerance for bandannas as he does for hand gestures. Photo: David Moir/Bravo

Happy New Year, my Top Chef: New Orleans friends! I hope your holidays were warm and happy. Myself, I spent Christmas in St. Louis, eating toasted ravioli, thin-crust pizza with Provel cheese, and my mother’s zesty Velveeta-and-RoTel dip with Frito Scoops. May I borrow your pancreas?

At the moment, I am spending New Year’s Week in Napa, and our cabin has no television, so we’ve been engaging in an ancient custom called “conversation.” It’s exhausting. Thank god for iTunes, where I was able to download this week’s Top Chef, which I will now watch and recap, and hope to be finished by cocktail hour. (Cocktail hour in Napa is 11 a.m.)

Just seven cheftestants remain after last week’s LSU Freshman Orientation extravaganza. There is still some residual drama lingering between Carlos and Nicholas over the former’s oven-theft accusation of the latter, though their body language around each other still seems friendly. Nina, who found herself in the bottom three last week, vows never to be there again, and probably won’t have to worry. Basically, all of the tension in the opening scenes of this episode was cooked up in an editing bay. 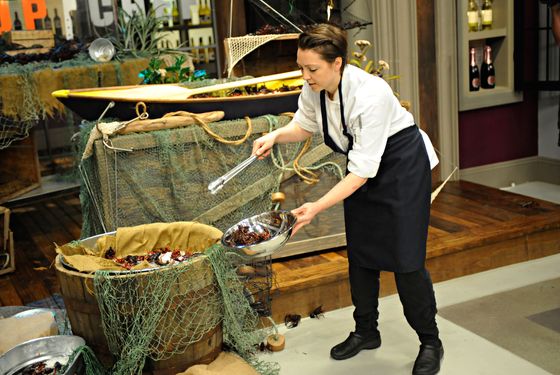 Our Quickfire challenge for the week is to create a unique take on the classic New Orleans dish crawfish étouffée. I hear crawfish can be very tasty, but here, they resemble New York City cockroaches — you know, those big mothers you find in your bathtub that have better calf definition than you do — and so I’m just not going to go near them. Neither is Stephanie, it turns out, who has a life-threatening allergy to shellfish that turn red in boiling water. It’s a very specific allergy that puts her at a very specific disadvantage, as she not only cannot eat what she’s cooking, she has never eaten what she’s cooking and therefore has no clue what it should taste like. But listen: If you eat sea insects, you can’t be too much of a stickler about the end result. 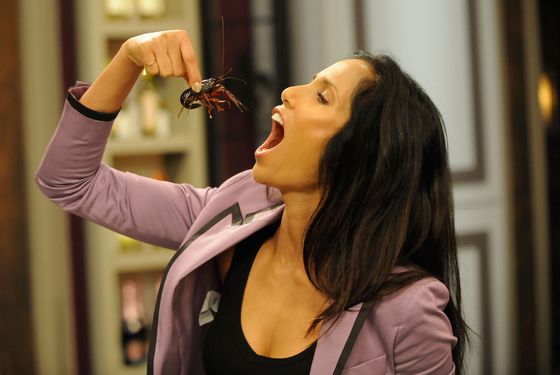 John Besh is back to judge this one, and Padma is quick to remind the chefs that étouffée is French for “smothered.” The subtext here is: “Get over yourselves and soak bug meat in spicy sauces.” Carlos has never heard of étouffée, because Carlos has never heard of studying, so he plans to improvise. Nick offers to taste Stephanie’s étouffée for flavor, because he is a gentleman. (Except for the fact that after he does a gentlemanly thing, he reminds you that he’s done a gentlemanly thing, which is an ungentlemanly thing to do. But he is handsome, so I will allow it).

Nina does her étouffée Italian style, with pasta and tomato broth, and Padma deems it “spicy and nice.” Padma is super high. Carrie tries a Spanish-style recipe with chickpeas and almonds, Shirley Singapores hers up with chiles, cucumber, and egg, and Brian keeps it simple in a straight-up NOLA étouffée with corn, peppers, crab, andouille, and gochujang, which is a thing I’ve never heard of, so maybe he’s not keeping it all that simple. Nick goes for a crawfish-and-shrimp mousse stuffed into Napa cabbage with brandy and corn, and Carlos just does a soup. When Padma asks him what he smothered, he suddenly can’t speak English: “What is it means, smothering? What is smothering means?” He’s kind of a weasel, this Carlos, but it’s a good strategy, and I’m going to use it the next time someone tries to get me to sign a petition. “Excuse? I don’t … Ingliss.”

John and Padma think Carrie’s flavors were muddled, Carlos’ dish was fine but nothing was smothered, and Nick’s was “more of a summer roll.” Nick immediately mutters “goddamn it” upon hearing this critique, marking the first time the words “goddamn it” have ever followed the words “summer roll.” Nina, Shirley, and Brian are the top three, and Shirley takes home the win.

Shirley also gets immunity, of course, which she will need for a difficult Elimination Challenge: it’s the Louisiana Seafood Festival, and the chefs will have to create a dish using two kinds of seafood. “For 1,000 people,” says Padma, giggling like a giddy character in an After-School Special. “Just kidding,” she immediately clarifies, “it’s only 200.” Good one, Padma! Also, I should point out that she is dressed like Robin Thicke from that unfortunate VMA performance that I was hoping to have been finished referencing by now.

There are some serious tactical errors right out of the gate. First of all, around half of the chefs decide to go with a crudo/ceviche/sashimi kind of deal, which is going to get monotonous, and you do not want to bore Hugh Acheson. Also, everyone warns Carlos to sharpen his knives if he wants to do a crudo, and there’s no way that isn’t serious foreshadowing. And Carrie decides to do flounder fritters, which she overthinks; there’s a ton of preparation involved in making fresh, delicious fish into the kind of thing you shred and fry and mask with heavy sauces. Stephanie wants to do a fried oyster, which will be a challenge to keep consistently crispy.

Indeed, Carlos has ignored his competitors’ warnings to keep his knives sharp, so there’s no way for him to slice his fish thinly enough. He must ask Nicholas for his sushi knife, which Nick begrudgingly lends him, begging him to take care of it because it was a wedding present. There is nothing kinder than doing someone a favor with a great big puss on your face. 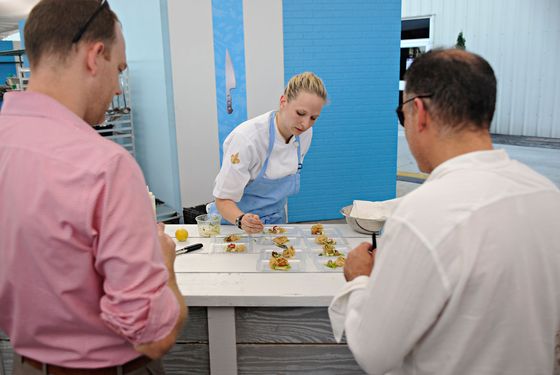 No one seems concerned about the levitating knife, so we won’t mention it either.Photo: David Moir/Bravo

The event begins! Steph’s line is indeed long, but her fried oysters with tuna and pickled mushrooms are a hit. Brian does grilled swordfish, shrimp and sweet onion puree with fennel and daikon radish, and Nick serves up yet another fancy thing: “oyster three ways,” which turns out to be oyster-leek soup topped with Champagne emulsion, green-apple yogurt, and amberjack cured in oyster brine. Hugh says it’s technically advanced but not that exciting. (Also, a random person in the crowd says: “I give people points for foam no matter what.”) Carrie’s flounder croquettes with pickled cucumbers and oyster emulsion confuse Tom: “Why puree a good piece of fish? Do that with scraps.” Exactly. Shirley’s tuna and amberjack ceviche with aged soy sauce, lime dressing, and toasted pecans goes over well, as does Nina’s marinated wahoo with salsa verde, tomato sauce, and pickled vegetables.

Carlos’ amberjack ceviche with rustic-peach-and-shrimp relish gets a big thumbs down; Besh doesn’t taste the fish. Plus, of course, Carlos doesn’t clean Nick’s precious knife. Dude’s got albondigas, I’ll give him that.

Back in the waiting room, Stephanie is biting her nails so hard, she is basically elbow-deep in her own mouth by the end of the episode. The judges criticize Carrie’s fish balls and Nick’s flat oyster medley, and rave about Nina’s wahoo and Steph’s oyster. The top three are Nina, Stephanie, and Brian, and Stephanie wins. “I’m gonna puke,” she says. “We know,” we reply. Stephanie is never not gonna puke.

Our bottom three are Nick, Carrie, and Carlos. Nick is in a blind panic. Nick is frequently in a blind panic, and I worry for my handsome prince; he’s getting too fancy and conceptual on us, when his greatest successes (gnudi, most recently) have also been his simplest. Also, Carlos has overstayed his welcome. But alas, it is early front-runner Carrie who gets the boot. Tom sums it up thus: “Turning fresh seafood into old seafood, not so smart.” Agreed. But at least she has Last Chance Kitchen! (Spoiler alert: It does not go her way.)

All right, folks: I am in Napa and I am not yet day drunk, and I think you will agree that that is unacceptable. See you next week.

the year i ate new york 9:05 a.m.
Should New Yorkers Actually Go to the Seaport? Checking in on Jean-Georges Vongerichten’s new megamarket, the Tin Building.
By Tammie Teclemariam
drinks Yesterday at 12:02 p.m.
I Regret to Inform You There Will Be No ‘Drink of the Summer’ Dirty Shirley, we hardly knew you.
By Chris Crowley
chains Aug. 16, 2022
We Found a Long-Lost Taco Bell Burrito Hiding Way South of the Border Finding seven layers of heaven in Santiago, Chile.
openings Aug. 15, 2022
Hakata TonTon Is Back Hot pot, cold ramen, and plenty of pig.
By Chris Crowley
pop-ups Aug. 12, 2022
A Queer Food Festival Is Happening in Queens Tomorrow Queer Cafeteria is popping up at Socrates Sculpture Park.
the grub street diet Aug. 12, 2022
L Morgan Lee Searches for the Joy in Dinner “I had my first bite and felt my spirit start to stir.”
By Zach Schiffman
meow Aug. 11, 2022
We Ate at the Fancy Feast Restaurant for Humans Yes, the fancy cat was there.
By Choire Sicha
the year i ate new york Aug. 10, 2022
Can New York’s Hotels Make Breakfast Important Again? Our late-rising diner-at-large gets up for some new spreads.
By Tammie Teclemariam
closings Aug. 9, 2022
Arrivederci to Nunzio’s, an Unsung Staten Island Slice Mecca After 80 years in business, the pizzeria is set to become a cabinet showroom.
By Chris Crowley
what to eat Aug. 8, 2022
Meet Brooklyn’s Newest Vegan Meatball Hero Garden Carver specializes in meat-free versions of beloved comfort foods.
By Megan Paetzhold
the grub street diet Aug. 5, 2022
Filmmaker Rebeca Huntt Is Serious About Breakfast “I made my oatmeal pancakes and watched Before Sunrise.”
By Alan Sytsma
the year i ate new york Aug. 4, 2022
Not All Culinary Journeys Can End in Success Sometimes you travel for a dish with a perfect online rating — and then you have to take your L in stride.
By Tammie Teclemariam
what to eat Aug. 3, 2022
How to Engineer a Clam Slice In a stunning bit of pizza innovation, F&F offers the New Haven specialty one piece at a time.
By Chris Crowley
reopenings Aug. 2, 2022
Txikito Is Back — Finally The neighborhood favorite is set to reopen after two-plus years of darkness.
By Charlotte Druckman
food tv Aug. 1, 2022
Everyone’s Thirsty for The Bear. Here’s What It’s Really Like to Date a Chef. “We all get into this line of work because we have personality disorders and massive daddy issues.”
By Nastassia Lopez
the grub street diet July 29, 2022
Sarah Thankam Mathews Eats Lychees on the Beach “I feel a happiness so intense and sudden it leaves me gelatinous.”
By Rima Parikh
openings July 28, 2022
He Has 11 Million TikTok Followers. Now He’s Throwing Ice Cream in Noho. “If you walk in and there is ice cream flying around in the air? It automatically sends the energy level up.”
By Ella Quittner
the year i ate new york July 28, 2022
Swimming With the Regulars at Marea An extravagant weeknight meal where everyone seems to know each other.
By Tammie Teclemariam
are u coming? July 27, 2022
A Tea-Spilling Lawsuit Upends a Hell’s Kitchen Gay Club Just how woke can a megaclub hosting underwear parties really ever be?
By Brock Colyar
field notes July 27, 2022
A Final Trip to Papaya King on the Eve of Its Likely Destruction The iconic hot-dog counter’s days appear numbered.
By Adam Platt
More Stories