Everybody has that friend who’s departed New York for more spacious, cheaper environs — the same friend who looks very happy in their Facebook updates from Portland or Chicago or Austin or wherever. Chefs are no different, often on the hunt for restaurant locations that afford plenty of space for less money and less hassle than what’s available in New York. There are substantial trade-offs for people who open restaurants outside of Manhattan or Brooklyn, of course (things like fewer customers and decreased media exposure), but a small group of chefs has found what they say is a best-of-both-worlds situation 90 miles away from New York, in Philadelphia.

It’s easy to think that people who leave New York couldn’t hack it in the city’s cutthroat restaurant environment. But recently, chefs are relocating just as they’re poised to make it big here, opting for the comfort of Philly over potential celebrity in New York. Peter Serpico left his justly celebrated role within the Momofuku empire to open Serpico on South Street in June. Meanwhile, after two years working at Torrisi Italian Specialties, Eli Kulp was poised to become the executive chef and partner of a little restaurant called Carbone (perhaps you’ve heard of it?). Instead, Kulp teamed up with Ellen Yin’s sixteen-year-old Philly restaurant, Fork, launched a spinoff called High Street on Market, and, most recently, got named the Philadelphia Inquirer’s “Chef of the Year.” So, what’s the draw?

First, the obvious: It’s much cheaper to lease a restaurant in Philly. “It’s a bang for your buck down here, real-estate wise,” Kulp says. “For a retail property in Old City compared to the Lower East Side, it’s about 50 to 60 percent less to operate in Philly when it comes to square footage.” Naturally, this means operators can afford bigger spaces. Take Fette Sau: The Philly outpost, which Joe Carroll opened in partnership with Stephen Starr in October 2012, is 7,000 square feet. The Brooklyn location is 1,200.

But the chefs say the comparison isn’t so simple. “Philly looks more affordable on paper, but it’s not apples to apples,” Kulp says. “You might have less square footage in New York … but the sheer number of people almost gives you an advantage there. There’s a pocket of foodie types down here, but percentage wise, it doesn’t even come close to New York … I had to recalculate my perception of what volume is. In Philly, outside of Friday and Saturday nights, it’s a challenge to fill up.”

Serpico agrees that the customers aren’t nearly as dense as they are in New York — and all the chefs agree that Philly customers are also less susceptible to hype and buzz than New Yorkers, which can lead to unpredictable traffic. “Our weekdays are really mad,” says Serpico. “It’s so sporadic: We’ll have 25 [covers] on the books and end up doing 45 … and we get everyone at 7 p.m.” Kulp says that while High Street maxes out on weekends, he often won’t turn his tables on weekday nights.

Philly customers also tend not to spend as much money. “You don’t have the expendable income that you see in New York, so you have to be more creative in how you present your menu,” Kulp says. High Street’s menu focuses on $10-or-so sandwiches (duck meatballs and house-cured pastrami on bread made by a Sullivan Street Bakery alum), and dinner dishes include $21 black-seaweed bucatini with lobster bottarga.

Serpico agrees that Philly chefs can’t list menu items the same way you would in New York. “When we first opened, we did lamb ribs for two for $60,” he says. “And we were judged solely on that. Now, we offer lamb ribs for one for $29, and our menu is between $8 and $29. I think that’s extremely affordable.” 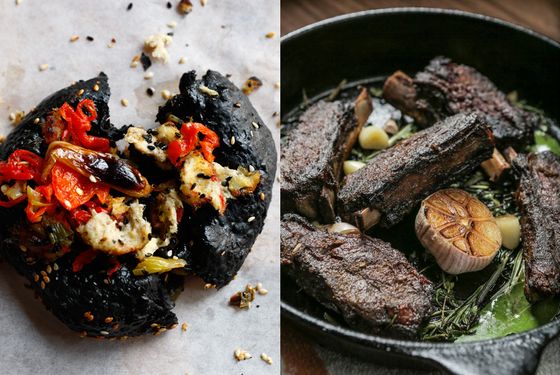 Lower menu prices are possible, though, because ingredients — from the many farms in nearby South Jersey, Lancaster, and Buck’s County — cost less than comparable products would in New York: “If you’re shopping in Union Square, you might pay $16 per pound for petite greens, young kale, or sprouting broccoli rabe,” Kulp says. “Those might be $5 per pound coming from the farms to us in Philly, and there are more products to choose from here. Not to mention, we call the farmers, they pick the vegetables, and they bring them to us. I’m not schlepping on the subway.”

Still, Pennsylvania’s arcane liquor laws pose a challenge for Philly chefs. The state controls all of its wine and beer stores, and profits off of them. (Pennsylvania’s actually the largest purchaser of alcohol in the country.) Philly restaurateurs can’t buy booze at wholesale rates; they pay retail like every other customer. As a result, restaurants are limited in how much they can mark up bottles. “As an operator, it’s a deterrent,” Kulp says. “If you’re coming from another state, you think rent’s cheap. And then — wait a second — you realize you can only make 75 percent margins on wine, compared to 200 or 300 percent … It’s almost controlled prohibition.” But for Serpico, one benefit of these archaic, confusing laws is that he sells more cocktails.

All told, even though Philly is a short drive from Manhattan, doing business there can feel like a very different experience. That’s why chefs like Serpico and Fette Sau’s Joe Carroll partnered with Stephen Starr on their restaurants in Philly. “I didn’t want to come in here blindly,” Serpico says. “I wanted to open with someone who knew the market, and he’s pretty successful.”

For any new restaurant in Philly, Kulp says the trick is creating “something that isn’t going to intimidate people or make them feel like they’re risking their money because it’s so out of touch with what they might anticipate.”

But he says there’s still a bigger mental divide between New York and Philadelphia than there is an actual geographical divide: “People in New York just don’t go to Philadelphia,” he says. “But if it didn’t work out down here, I figure I’d take the hour-and-fifteen-minute train ride. Once I realized how close Philadelphia is, it’s not like you can never go back.”

the underground gourmet 8:00 a.m.
A Tasting Menu That Ends With Plenty of Leftovers Bird Dog offers the most useful luxury of all.
By Tammie Teclemariam
best in class Feb. 3, 2023
16 of the Very Best Water Bottles Always be hydrating.
By Emma Wartzman
the grub street diet Feb. 3, 2023
Novelist Xochitl Gonzalez Always Has Capers on Hand “Capers are your bitchy friend who can’t keep their mouth shut.”
By Emma Alpern
problem solving Feb. 2, 2023
Everything You Need to Know About Tipping Right Now 15 to 20 percent isn’t going to cut it anymore.
look book Feb. 2, 2023
The Look Book Goes to Tatiana  A recent Wednesday night at chef Kwame Onwuachi’s consistently booked Lincoln Center restaurant.
drinks Feb. 1, 2023
Via Carota Is Launching Its Own Bottled Cocktails Negronis, Manhattans, and espresso martinis that are ready for your home bar and your TikTok feed.
By Chris Crowley
the underground gourmet Jan. 31, 2023
Italian Beef So Good You’ll Forget About The Bear The sandwiches at Bobbi’s stand out on their own terms.
By Tammie Teclemariam
gifts they might actually want Jan. 30, 2023
The Best Gifts for Beer Lovers, According to Brewers and Beer Lovers Because you can do better than a novelty beer helmet.
field notes Jan. 30, 2023
The Tin Building Has Everything (Except a Purpose) Jean-Georges Vongerichten’s lovely but lifeless $200 million food hall.
By Adam Platt
the grub street diet Jan. 27, 2023
Sylvan Esso’s Amelia Meath Wants the Weird Appetizers “If there’s a bad app, I’ve gotta try it.”
By Alan Sytsma
the year i ate new york Jan. 26, 2023
The Hotpot Haze of Haidilao A steamy, celebratory feast in Flushing.
By E. Alex Jung
news Jan. 25, 2023
Here Are the Semifinalists for the 2023 James Beard Foundation Awards New York is well represented by Department of Culture, Kru, and more.
groceries Jan. 25, 2023
Welcome to the Shoppy Shop Why does every store suddenly look the same?
By Emily Sundberg
the underground gourmet Jan. 23, 2023
Now Is the Time for Trini Roti The Caribbean staple is a perfect midwinter lunch.
By Tammie Teclemariam
the grub street diet Jan. 20, 2023
Kashana Cauley Will Drive an Hour for the Right Yogurt “I believe in good yogurt more than other people believe in God.”
By Zach Schiffman
conversations Jan. 18, 2023
The Rush to Call Fine Dining’s Death Does Noma’s closing announcement really mean other restaurants are doomed?
By Chris Crowley, Alan Sytsma, and Tammie Teclemariam
top story Jan. 17, 2023
Restaurant Workers Are Paying to Keep Their Own Wages Low The National Restaurant Association lobbies Congress to keep the minimum wage low. Revenues from food-safety courses help pay for that.
the underground gourmet Jan. 16, 2023
Where to Find the City’s Best New Soup Elaborate broth is back.
By Tammie Teclemariam
the grub street diet Jan. 13, 2023
Highsnobiety’s Willa Bennett Is Thinking About Her Overnight Oats “I’ve never tried to make the oats while I’m away. It wouldn’t be the same.”
By Zach Schiffman
best in class Jan. 12, 2023
12 of the Very Best Air Fryers Custard toast at the ready.
More Stories