Get on the Elm’s burger before it’s too late.

By now you’ve read all the various year-end round-ups and even this year’s Where to Eat extravaganza from newly non-anonymous critic Adam Platt. There is a ton of outstanding information out there that will help you eat better in the coming year. But if you’re going to make proper use of these round-ups and actually eat all of the things you may have missed, you’re going to need a plan. (Especially since 2013 was such an outstanding year for new restaurants, and it’s just a matter of time before 2014’s new spots start to open.) This is where Grub Street comes in: Keep reading to see 25 things that were big in 2013 that you absolutely need to do in order to get ready for 2014, then click through the slideshow to read why each of these items is so vital to New York’s current culinary identity. 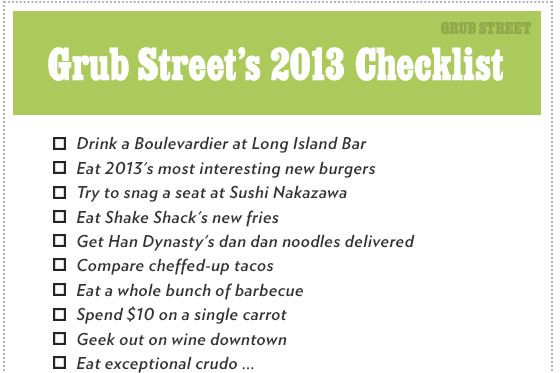 Del Posto Is a Goner
Del Posto Is a Goner
All closings »
kicking the tires Yesterday at 9:45 a.m.
Michelin Is Awarding Stars Again. Here’s the Full List of New York Winners. After a COVID-related delay, the company’s latest rankings offer a few surprises.
By Rachel Sugar
big delivery May 5, 2021
5 Big Reasons the Delivery ‘Boom’ May Soon Go Bust A new study shows that 2020 was more of a bust for third-party platforms.
By Chris Crowley
veggies May 5, 2021
Why Daniel Humm’s Decision to Eliminate Meat Is a Huge Deal He’s not the first chef to embrace plant-based eating, but he has a singular platform to explain its benefits.
By Rachel Sugar
field notes May 4, 2021
The Great Indoors A critic reacclimates to the unfamiliar terrain of the dining room.
reopenings May 4, 2021
The High-Design Return of Henrietta Hudson New York’s longest-operating lesbian bar is back in business.
By Melissa Kravitz Hoeffner
reopening May 3, 2021
NYC’s Summer of Hedonism Will Start Even Earlier Than Expected, Cuomo Says The governor wants to have everything back at full capacity before the end of the month.
veggies May 3, 2021
Eleven Madison Park Will Reopen Next Month With a Fully Plant-Based Menu “It was clear that after everything we all experienced this past year, we couldn’t open the same restaurant.”
By Rachel Sugar
beef Apr. 30, 2021
Two Customers Were Shot at Peter Luger Last Night Both, thankfully, are expected to survive.
the grub street diet Apr. 30, 2021
Haley Nahman Is ‘Very’ Anti-Parfait “I don’t think yogurt should be vertical.”
By Jane Starr Drinkard
snack time Apr. 29, 2021
Kuih Cafe Is a Showcase for Malaysian Sweets and Snacks “I’ll make a point to go there whenever I’m in Chinatown.”
By Chris Crowley
reopening Apr. 28, 2021
NYC Rejoices As COVID ‘Snack’ Rule Is Set to End and Bar Seating Returns New Yorkers can once again order a drink without the need to get a sandwich, too.
reopening Apr. 28, 2021
Everything You Need to Know About Eating in Restaurants Right Now The world has changed. So have dining rooms.
By Rachel Sugar
reports Apr. 27, 2021
What You Need to Know About the Troubling Times Report on the Willows Inn Another star chef, and another spate of horrifying allegations.
restaurant revitalization fund Apr. 27, 2021
How to Apply for the SBA’s $28.6 Billion Restaurant Revitalization Fund Registration begins this Friday.
the group portrait Apr. 27, 2021
Photo: The Activists Bringing Justice to Cannabis They believe legalization isn’t about weed but about equity and restitution.
people's choice Apr. 26, 2021
The Best Air Fryers on Amazon, According to Hyperenthusiastic Reviewers “I didn’t want to believe the hoopla about this air fryer, but all of the positive reviews were on point.”
beer me Apr. 26, 2021
The Insane Fight Against ‘Plant-Based’ Foods and Drinks Taking on Big Cabbage.
restaurant review Apr. 26, 2021
India Off the Beaten Path For their latest venture, Dhamaka, the owners of Queens hit Adda delve deeply into the country’s most local pleasures.
By Adam Platt
the office Apr. 26, 2021
Looking Back at the Truly Debauched Office Holiday Party After cocktails in the conference room, it could get a little sleazy.
By Rachel Sugar
the grub street diet Apr. 23, 2021
Laurie Woolever Loves a Raspberry-Butterscotch Sundae “This was upsetting to people.”
By Chris Crowley
More Stories