Can’t the show think of any other ways to divide the chefs up? Photo: David Moir/Bravo

Hey, did everyone have a good Thanksgiving? I ate two full dinners and forgot the names of every single cheftestant on Top Chef New Orleans. It was glorious. Surely, after the week off, they’ll ease us back into … oh, wait, no they won’t, because immediately it’s time for Restaurant Wars! Rosie the Riveter, Salooshian Lady, and the guy with the face seem excited about it. Let’s heat up some leftovers and dive in.

The remaining chefs divide into groups of five to create two pop-up restaurants in 24 hours. Menu, décor, everything. (Design-wise, what a relief to participate in this challenge at this moment in history, when every restaurant has a long communal table and is lit by raw Edison bulbs, like some kind of Mumford and Sons theme bar.) Among the diners will be a table of Chase Sapphire VIP card holders, who will visit both restaurants, because they’re discriminating diners who enjoy the finer things and pay a low introductory APR (no, really, this marketing language goes on for a month and a half, and happens in front of a GE fridge that’s full of Philadelphia Cream Cheese). I feel like we should all get $10 for watching this show.

Also, my St. Louis homeboy Danny Meyer will be a guest judge! This is as good a time as any to reveal that I brought the STL delicacy “toasted ravioli” to both my Thanksgiving dinners last week. What is it, you may ask? It is individual meat raviolis, breaded and deep-fried, and the fact that I did not serve it with a mayonnaise-based dipping sauce is what qualifies as “restraint.” Please form an orderly line for the recipe.

The Green Team is made up of ringers and is therefore doomed to fail. To review, we’re talking about Bettie Page–ish Sara, beardy local Justin, Nina and her filthy mouth, Carlos who still hasn’t distinguished himself, and sweet Shirley. Justin takes the reins as executive chef, Sara takes front of house. This is good because they’re both kind of unpleasant. 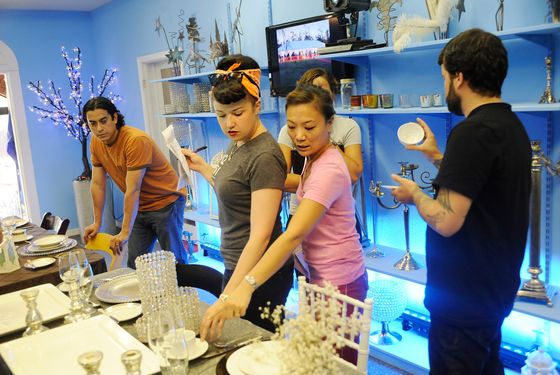 The restaurant will have a “Florida vacation home” feel.Photo: David Moir/Bravo

Right away, the Green Team’s egos get the best of them. They can’t pick out plates at the restaurant supply store because they haven’t decided what kind of dishes they’re going to serve, and then nobody can find molds for Sara’s dessert, and it’s all a big mess and it’s kind of fun to watch the early favorites flail. Plus, Sara does not handle pressure well. Sara is made of weary, put-upon sighs.

The Purples are doing a seafood restaurant called “Fin.” Travis, Brian, and Carrie travel in their brand-new Toyota RAV4 to Whole Foods to pick up supplies. Brian’s going to kick off the dinner with a scallop crudo and purple-corn relish, Stephanie’s doing an oyster velouté with pasta, and Nick’s cooking drum and oxtail with a hibiscus reduction. I know what 40 percent of the words in the preceding sentence mean. Travis will end it all with an olive-oil cake and Greek yogurt.

The Green Team’s restaurant will be called “Found,” and each chef will bring something of their own culture to the menu. It’s thematically all over the place, plus it’s just too easy a set-up for a “lost” joke. Storm clouds are brewing. 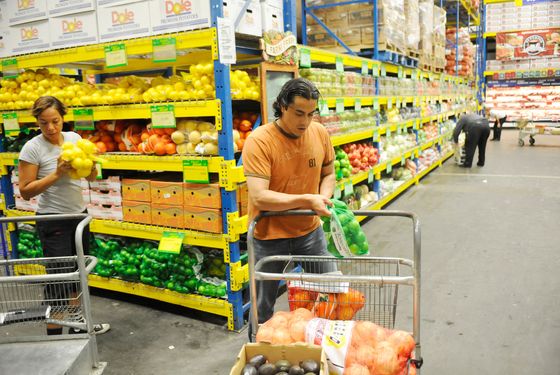 The restaurants open, and yoops, the mistakes aren’t just found at Found. Back at Fin, it turns out Brian picked up xanthan gum when he meant to get agar — don’t you hate when you do that? — and it’s going to throw his whole purple corn relish off somehow. No, really, this is the biggest mistake the producers could find at Fin. Everything else goes smoothly; Nicholas is an expert at time management, everyone’s staying out of each other’s way, and, duh, Travis is a big charming natural at front-of-house management.

Also, everyone has to pretend they’re intimidated to serve the VIP Chase Sapphire cardholders, which is just the cutest thing you ever did see.

Over at Fin, Tom doesn’t care for Brian’s scallops, deeming them “too snotty” and cruelly putting me off the dinner I’m eating as I write this. Carrie’s shrimp is a little overcooked but flavorful, and there’s a pool of butter at the bottom that’s just perfect for some bread-soppin’. Stephanie’s pasta gets good grades, the service is top drawer, and I kind of want to eat at Fin. 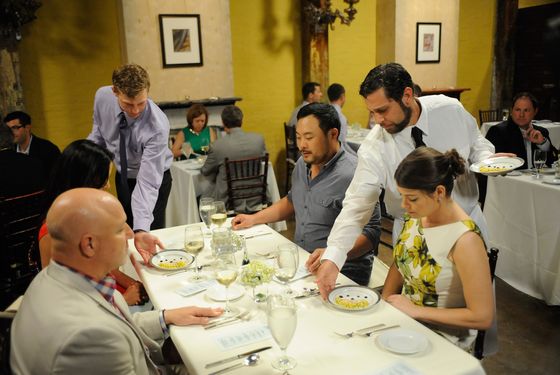 Meanwhile, the Green Team is just fucking up left and right. The staff doesn’t know how to fill out their tickets, which leads to backups and wrong orders coming out of the kitchen. Justin is so overwhelmed, the Chase Sapphire VIP cardholders receive their main courses all at different times, and you know how those people get. Worse, the judges show up, and Sara gives Justin what she calls “a verbal fire”; she tells him they’ve arrived, and he says he’ll need a ticket to that effect, which she promises but doesn’t deliver, so the judges just sit there forever. Do you think you keep Tom Colicchio waiting? You do not.

Which do you find more unsettling: The forced, toothy grin of a person who is clearly furious, or being called a pet name in frustration? No need to choose, because Sara does both: “Big smile, baby-doll,” she barks to her food runner as they hustle their food to the judges. Worse, Sara simply drops the plates and scoots away without describing any of the dishes or revealing who made what. This might have been an act of mercy: Carlos’s red snapper crudo with avocado mousse is greasy, Justin’s roasted parsnip agnolotti with rabbit is “both undercooked and overcooked,” and gets a rare, succinct “This is SO BAD” from Tom. Shirley’s olive-oil-poached cobia fares better, but Nina’s pork tenderloin is the star of the shit show. Sara’s mascarpone cream falls apart, so her nectarine-brown-butter cake is left “just a piece of cake on a plate,” which actually doesn’t sound like such a bad thing. (Obviously, here, Sara takes the time to describe the dish.)

You know how there’s a TV in the chefs’ waiting area, so that they can watch the judges as they deliberate? Tonight, the TV turns on, and a giant hand comes out of it and does one long, Three Stooges–style slap across all of the Green Team’s faces. They’re not even trying to make this one look close: the Purple Team wins. Nobody gets any real criticism, but Nicholas wins the challenge. Congratulations, handsome one.

Found is deemed a disaster, and absolutely nobody is surprised. At the judges’ table, it’s a big fight between front of house and kitchen, with Sara blaming Justin’s time-management skills, and Justin calling Sara out for sloppy ticketing. I know I wasn’t actually there, but he’s totally in the right. Tom points out that even though they presided over the worst aspects of Found, they should really be judged on their dishes, and it turns out their dishes sucked equally.

This is a tough one, but packing her knives is Sara. The Toyota Opinion-o-Meter asks: Was it Sara’s cooking or her attitude that sent her home, and roughly 230 percent of voters agreed that it was the latter. Duh.