So, listen: I know this season of Top Chef has been a little low on drama, but tonight’s episode really makes up for it. You want fireworks? You want heat? Brace yourselves, because the long-simmering tensions among the remaining eight cheftestants finally … reaches a temperature that is safe for human consumption? My food metaphors need work, but what I am trying to say is that there is major drama in this hour and it is about damn time, because we are starved for it.

We open with Nina lamenting the ouster of her best gay Travis. She doesn’t actually call him her “best gay,” but you know she’s the kind of person who would. Alas, gone is the last of her “gossip girls” (both of whom were boys), and now she feels she has nobody to talk to. Here’s a fun suggestion: Maybe widen your conversational palette beyond gossip and fellatio and watch what happens? (For what it’s worth, I kind of miss Travis myself. He rubbed me the wrong way at the beginning, with his insistence that he understands Asian food better than actual Asian people, but he became one of the more fleshed-out characters of the season, and I guess I have a soft spot for people who are inching their way out of the closet.)

Tonight’s Quickfire Challenge involves Questlove, so it is already the best one ever. I love that Questlove has become this brilliant, beneficent presence; he’s our new Tony Randall. And just as he’s about to explain the challenge, a drum line busts into the kitchen with … drumsticks! All different kinds of drumsticks! Good ones, like chicken! Tricky ones, like quail! Ones that I don’t know what they are, like squab! The challenge is to grab the drumstick of your choice and cook it in an interesting way, the end. It is diabolical in its simplicity. Winner gets immunity, the rest of us have to watch Padma and Questlove eat poultry legs, a thing that nobody can do nondisgustingly. In the mad rush for the best legs, Shirley falls, and Nick helps her up, like a gentleman should. As a result, he misses out on the better proteins and ends up with quail. Shirley trots off with duck, which looks pretty nice.

Steph does her turkey leg “Fred Flintstone style,” in that it is enormous and will tip your car over if you get it at a drive-in. She is worried about the size, relative to the prep and cooking time, but the grilled/fried result, with Sriracha and sour-cream-buttermilk dressing, looks done enough. Nina gets Guinea hen, which she does Salooshian-jerk style. Carrie is stuck with squab, which you can over- or undercook pretty easily, so its margin of yumminess is very small. But she insta-marinates the wings with thyme and cayenne pepper; Questlove is not mad at them, and I really have to remember to eat dinner before watching this show so that I don’t end up sending out for Wing Street.

Nick does his quail legs frog-leg-lollipop style, but there is very little meat on them bones. Justin gets plain old chicken legs, and does them all fancy, as is his custom. Brian goes a little crazy with a drumstick soup and chicken-skin cracklins, to maintain the crucial crunch of the drumstick. Carlos isn’t prepared for his goose legs to cook down as much as they do, so he cuts the bones so they don’t look paltry. Trouble is, as an autodidact, he never learned how to cut a bone, so he just hacks the hell away at it, sending bone fragments everywhere, including right into Padma’s mouth. Here’s how bad it is: Padma notices it. 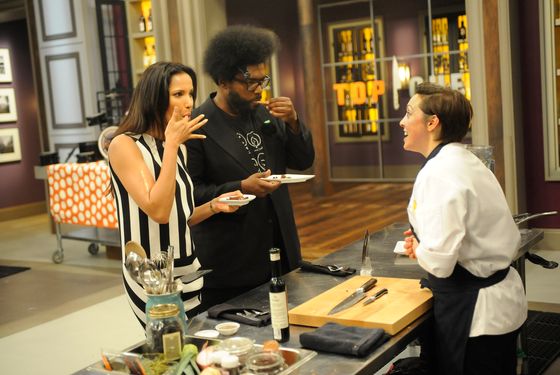 On the bottom are Nick (too salty), Justin (not salty enough), and Carlos (overcooked and also a choking hazard). The top three are Carrie, Brian, and Nina, and Carrie takes it home! She’s back in the game!

For the Elimination Challenge, everyone’s going to Louisiana State University to cook for 500 incoming students at Freshmen Orientation Weekend. God almighty, can you imagine the combination of being 18 and having easy New Orleans access? I went to New Orleans for a weekend a year ago and I still feel it in my liver when it rains. How does any LSU student survive to sophomore year?

Also, the chefs will be living in the dorms for the night, and there is the expected amount of grousing over the tight quarters, but these dorm rooms have separate living areas, so everyone can stuff it. And the winner gets a Toyota Rav-4. Did you know that Toyota is a sponsor of Top Chef? It’s true.

The massive, beautiful, immaculate LSU dining hall has eight cooking stations, one for each cheftestant. Carlos, who is doing some kind of fish, decides that he absolutely must have the station with a plancha, even though Shirley’s already claimed it. But Nick’s kind deed from earlier is being paid forward; she decides to be a good sport and take the station with the brick oven. He’s a little jerky about it, our Carlos. But just you wait!

Nick claims an oven for his roast pork with Parmesan grits. Shirley’s new station doesn’t have the grill space she originally wanted, but she improvises by charring her tomatoes in the brick oven. Justin decides to cook something fancy, because he has apparently never met an 18-year-old American human. Stephanie wants to do grilled cheese and tomato soup, because she is a genius, but she can only find feta and cottage cheeses. Nina opts to make a corn puree, assuming, as one would, that the huge kitchen would have a huge blender, but there’s only one tiny Cuisinart. Carrie goes for a chilled broccoli salad with a yogurt sauce, to safeguard these children against the dreaded freshman fifteen. She’s got immunity, so why not make a statement? Also, as helpers, they are issued lunch ladies, who are of course adorable and excited to be on camera, and I hope they get residuals but they totally won’t.

So here comes the drama! Carlos needs an oven to finish his tilapia, and he tries to use the one Nick’s already claimed, and Nick tells him he can’t. And then later, Carlos tells Tom that his dish isn’t ready on time because Nick stole his oven! And then Nick finds out about it, and he’s like: “Don’t say that!” And Carlos is like: “Okay, I’m sorry.” And that’s the whole thing. Are you guys okay? Should we move on, or do you need a minute? 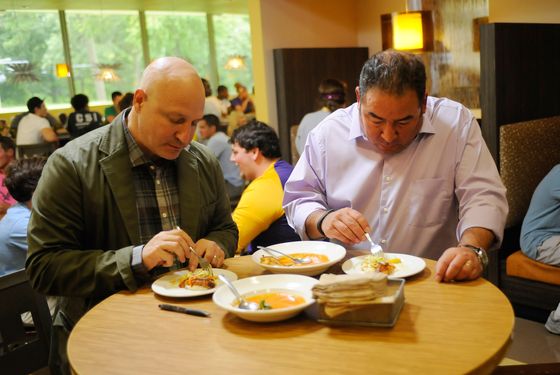 Why does Tom look like he’s being punished?Photo: David Moir/Bravo

Shirley’s roast beef with potato puree and fire-roasted tomato relish is a huge hit with the students, with one young man calling it “the best thing [he’s] ever put in his mouth,” because he does not yet understand how hazing works. Nina’s fried chicken with corn puree is unpopular, but Brian’s shrimp cake with chipotle aioli flies out of his serving station. Since most people just end up dipping their grilled cheese into their tomato soup, Stephanie does the work for them by serving the sandwiches right in the soup, and it’s a recipe for sogginess. Nick’s roasted pork with Parmesan grits and bacon-brown-sugar gravy flies under the radar, but not quite as far under the radar as Carrie’s Li’l Corner O’ Responsible Food Choices station, which literally nobody visits. Justin’s marinated Gulf shrimp with cauliflower, asparagus, and garlic puree is indeed deemed “weird” by the Louisiana kids. The moral here: Don’t try to teach college kids anything.

At the judges’ table, the gang praises Shirley’s inventive use of the pizza oven, but give Justin and Nina the gas face for blandness and flakiness, respectively. Their top three are Shirley, Brian, and Carlos, with Shirley taking the Rav-4 back home to her newly air-conditioned Las Vegas home. Stephanie, Justin, and Nina are the bottom three, and as you knew before you even got to these words in this sentence, Justin goes home. But he promises to “turn elimination into eliminade” and redeem himself on “Last Chance Kitchen.” (Spoiler alert: he doesn’t, and “eliminade” is not a thing.)

In honor of my college years, I’m going to make Velveeta Shells & Cheese. But the kind with the small package of freeze-dried broccoli florets; I’m not an animal. See you next week!