The Bacardi-owned Scotch whisky company Dewar’s has pulled all versions of an online advertisement called “Meet the Baron” after bloggers pointed out it was offensive and, well, just plainly hateful toward women. The ad was supposed to be an introduction to a character called “the Baron,” a proxy for the brand and all-around wingman who valiantly saves his chum from the advances of a woman in a bar, depicted here as overweight and forward. However it was supposed to play, it didn’t, and before its untimely demise this morning, someone even made a compelling argument about how certain shots from the Dewar’s commercial seemed to echo a violent stretch of Stanley Kubrick’s Clockwork Orange adaptation from 1971.

Here’s what happened: “Meet the Baron” recently began running as a sponsored video post across several sites and on the liquor company’s social-media pages. Though it’s been pulled, we’ve seen the spot: It begins with the Baron, who races a sporty convertible through a desolate cityscape at breakneck speed. He arrives in the nick of time to pick up his buddy. They wear suits, they grimace, they need to go drink Dewar’s and hook up with beautiful women. So it’s nighttime, they’re at the bar, the lights are dim, and you can practically smell the El Niño system of foul body spray wafting in the place as everyone gets their drink on, then, blammo! — What’s this? In walks an overweight woman in a red dress, who begins her approach toward the buddy. 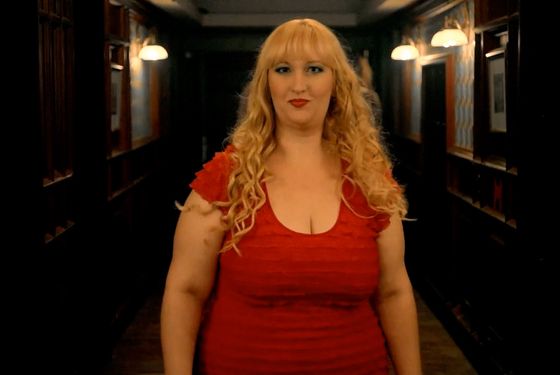 The “villain” on the “battlefield.” Lots of tone-deaf metaphors.Photo: Dewar’s

Luckily, the narrator tells us, the Baron is the kind of guy who, in battle, “wouldn’t just take a bullet for you; he’d be the one throwing himself on the explosives.” So, he blocks her approach. 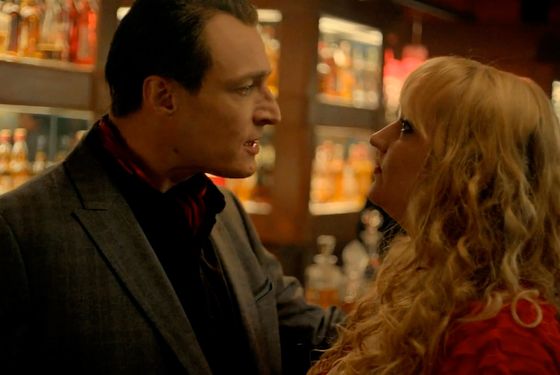 And, after some unspecified heroism, the red-dress woman has been vanquished offscreen somewhere, and the Baron and his bespoke-shirted bro are left to toast to the finer things in life, specifically, “Swedish bikini models,” who now conveniently join them for a drink while Dewar’s mascot Claire Forlani looks on scornfully/approvingly/distantly/vacantly from the balcony. 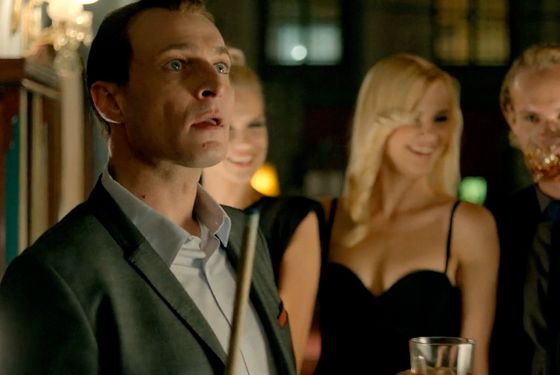 And, after some unspecified heroism, the red-dress woman has been vanquished offscreen somewhere, and the Baron and his bespoke-shirted bro are left to toast to the finer things in life, specifically, “Swedish bikini models,” who now conveniently join them for a drink while Dewar’s mascot Claire Forlani looks on scornfully/approvingly/distantly/vacantly from the balcony.

Dude even lost his ascot in the encounter.Photo: Dewar’s

The ad is clearly and ridiculously tone-deaf, but it wasn’t until Canadian writer Johanne McInnis, who goes by the handle Whisky Lassie, started a petition online calling “Baron” sexist and stupid — and demanding its removal — that people started paying attention.

Other spirits writers jumped in, letting McInnis know she was in good company; on his blog, Fred Minnick called the ad “tasteless” and wrote that the spot may even be in violation of the Distilled Spirits Council of the United States’ “Code of Responsible Practices,” which seeks to halt offensive stereotyping and discrimination in liquor marketing. MediaBistro and Business Insider took issue with the message.

We heard your responses to "Meet The Baron" and have chosen to remove the video from YouTube.

But not before writer Christine Sismondo noticed another strange aspect of the commercial at the Huffington Post. It turns out that the Baron’s introduction … 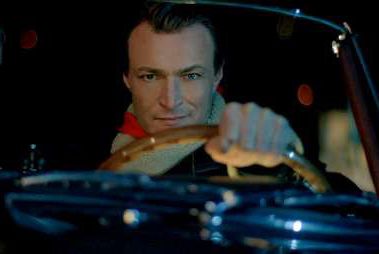 But not before writer Christine Sismondo noticed another strange aspect of the commercial at the Huffington Post. It turns out that the Baron’s introduction …

The Baron arrives on the scene.Photo: Dewar’s

… is oddly reminiscent of this particularly chaotic sequence from A Clockwork Orange. 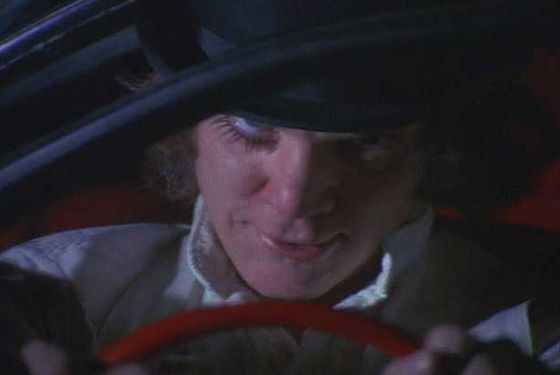 … is oddly reminiscent of this particularly chaotic sequence from A Clockwork Orange.

After the gang plays chicken with oncoming traffic, there is a tight, square frame around Alex’s face. It’s nearly identical to the one framing the Baron. The color scheme is extremely close. And, then there’s the narrator, who has the same cadence as the man about to commit the ultra-violence.

She concludes it’s too similar to be coincidence, and the writers must have thought “it was a good idea to make a reference to a film about gang rape in a commercial about men going out to drink and pick up women.”

Intentional or otherwise, Dewar’s has spent this morning responding to writers directly over their critical posts, standing by the notion that their “Drinking Man’s Scotch” campaign features a “strong and successful female icon as the spokesperson for the brand,” but also, reading between the lines, pledging that the Baron’s next act of “camaraderie” won’t be so offensive.

Liquor companies need their spokespeople, and a kinder, gentler Baron would be a start. But nothing would be more affirming than Dewar’s making a new commercial for its Scotch, one that recasts the “evil villain” in the red dress as the hero of the story. That would be really toast-worthy.

Why the Closing of New York’s Lexus Restaurant Is a Real Loss
Why the Closing of New York’s Lexus Restaurant Is a Real Loss
All closings »
shopping 1:24 p.m.
The Cervo’s Team Launches a Preserved-Seafood Line “Our love of anchovies and sardines runs pretty deep.”
openings 9:54 a.m.
Inside Mena, Victoria Blamey’s First-Ever Solo Restaurant The new project opens this week.
By Mahira Rivers
the grub street diet Jan. 21, 2022
Chef Alexander Smalls Always Says Yes to Duck Eggs “I graduated from quail to duck. For me, it’s a more fertile taste.”
By Chris Crowley
it's soup season Jan. 20, 2022
Everything You Need to Know About ‘Soup Mother’ A new name for an ancient approach to cooking — and something we all might want to try.
the food biz Jan. 19, 2022
Battle of the Roasted Garlic Achaars A Trader Joe’s knockoff has put condiment-maker Brooklyn Delhi in a pickle.
By Rob Patronite and Robin Raisfeld
killed it Jan. 18, 2022
It’s Time to Bid Adieu to Cooking With Paris Maybe Paris Hilton’s cooking show was just too complicated for a world that values easy answers.
endorsements Jan. 18, 2022
A Sharper, Snappier, Picklier Health Salad Poulet Sans Tête’s version goes heavy on the cucumbers and skips the sugar.
restaurant review Jan. 18, 2022
Dining and Dashing at Semma Attempting to savor South Indian delights during a COVID surge.
By Adam Platt
rip Jan. 15, 2022
Good-bye to Ed Schoenfeld, a Man Who Changed the Way New York Ate The restaurateur and food-world impresario has passed away.
By Adam Platt
urban forager Jan. 14, 2022
At Té Company, the Persimmons Are Hung Up to Dry “The old way of preserving ingredients — for me, it’s fascinating.”
the grub street diet Jan. 14, 2022
Starlee Kine Spends Lunch Breaks With Her Dog “For every human that left the city, it seems a dog has been added.”
By Rachel Sugar
reopening Jan. 13, 2022
How Bad Has Omicron Been for New York’s Restaurants? As with everything these days, it depends who you ask.
By Chris Crowley
closings Jan. 13, 2022
Why the Closing of New York’s Lexus Restaurant Is a Real Loss Against all odds, it served as a worthy passport to food from around the world.
By Joshua David Stein
gifts they might actually want Jan. 12, 2022
The Best Gifts for Beer Lovers, According to Brewers and Beer Lovers Because you can do better than a novelty beer helmet.
omicron Jan. 12, 2022
Now We Have to Worry About Groceries, Too? Store shelves are looking emptier for some very real reasons.
members only Jan. 12, 2022
New York’s First NFT Restaurant Is Coming Soon. Wait — What? You’ve got questions. We’ve got (some) answers.
best in class Jan. 11, 2022
25 of the Very Best Drinking Glasses Twenty-one interior designers and service-industry professionals weigh in on their favorite glasses for water, juice, iced tea, or something stronger.
By Dominique Pariso
reopening Jan. 10, 2022
The Restaurant Industry Has Always Treated Sick Workers With No Remorse Will anything change because of Omicron?
By Chris Crowley
the grub street diet Jan. 7, 2022
Actor Jeff Hiller Is Eating His Feelings “My husband does basically all of the cooking and I just reap the benefits.”
By Chris Crowley
reopening Jan. 6, 2022
Eric Adams Has Already Lost New York’s Restaurant Workers That was fast!
More Stories