These mid-season episodes of Top Chef are tricky; there are literally too many cooks in the kitchen. Things can get a little monotonous as we weed out the last few obvious non-winners. So if they have to unleash a gibberish-spouting jazz shaman and a full-carcass pig smorgasbord to keep us engaged in the process, I say laissez les bon temps rouler.

Tonight’s Quickfire Challenge is to create a unique hot sauce that will impress special guest Dr. John. Now, listen: I am a fan of Dr. John — that Locked Down album is really something — but this guest is special in all senses of the word; he is dressed like what would happen if Mr. Furley went to Burning Man, he has no idea where to look, and while he speaks his own made-up language, he does it like a tourist with a phrasebook. Phrases change meaning from minute to minute, sentences trail off, and at one point I swear he just says, “Flobbity florf.” When asked what he looks for in a hot sauce, he responds with words like “flavornocity” and everyone nods knowingly, solemnly. I silently praise Jesus and pop some popcorn.

A hot-sauce challenge is just the thing to shake this show up, and at just the right time. I think the lesser-known chefs might really have a chance to shine with such a simple task, while early front-runners like Nina and Carrie might overthink it. Indeed, Carlos — from whom I’ve expected more — jumps in with confidence and makes a Yucatan-style sauce with mango, passion fruit, and habanero that makes Dr. John say whatever means “yum” on his planet. Justin jazzes his up with fermented anchovies. And Brian goes slightly Asian with a jalapeño-and-serrano-chile sauce mixed with lime and yuzu. When Dr. John clarifies that “hip tang” is the main element he seeks, Padma says, “I understand,” and the wonderful thing is that she totally does.

Nicholas, who had his first peptic ulcer at age 20, must reject hot sauce in his personal life, so he goes for more of a sweet-and-sour situation that Dr. John awards his prized “hip tang” designation, except now that means he doesn’t like it. One gets the sense that “hip tang” is like “shalom” in Dr. John’s world: hello and good-bye. Louis’s Fresno-chile-and-maple sauce sounds interesting, but looks awfully thin, and Dr. J says he hasn’t got a handle on it. Nina and Carrie reach for the flavors of Saloosha and Trinidad, respectively, and both are too hot for Dr. John, which is amazing, because he’s like a party guest in an eighties movie who drinks a gallon of gasoline, burps, and keeps dancing. Brian wins the Quickfire and gets immunity for the second week in a row. 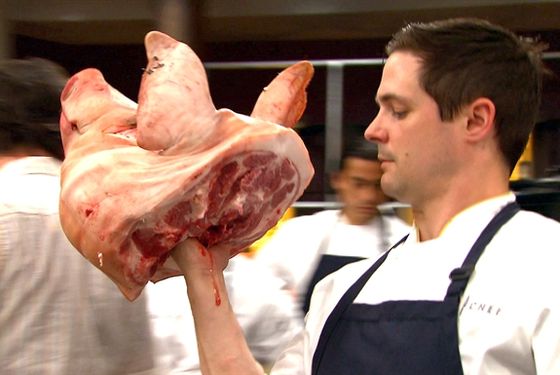 And then Dr. John is dismissed. Or Dr. John just wanders off. It’s hard to tell with that guy. We’re on to our Elimination Challenge, wherein Padma promises the Cheftestants will have a chance to “pig out.” Yes, of course that means they must butcher and cook a giant, disgusting pig corpse, thanks for asking. They will need to do it in the style of boucherie, a nose-to-tail kind of deal. It’ll be judged in part by local celebrities Toby Rodriguez and Donald Link, who I’m sure are important but who don’t make much of an impression because the dead eyes of a freshly slaughtered 300-pound pig are looking right at the camera.

To Whole Foods we go! You have correctly guessed that Travis is going Asian. His ramen dish will feature store-bought noodles, which I fear will come back to bite his ass. Carlos and Justin both decide to do tacos. Shirley’s family used to do a full-pig roast for Chinese New Year, so she’s good to go.

To make the challenge even more challenging, the chefs will have to finish off their meals at the Bayou Barn, an outdoor space with China boxes, smokers, pressure cookers, and just straight-up open fires.

Justin slaves over a wood fire for his meal, but once it’s up and blazing, the rest of the chefs make use of it. When he protests, Nina tells him to suck a dick. I don’t understand the rules of Bravo’s standards and practices department. 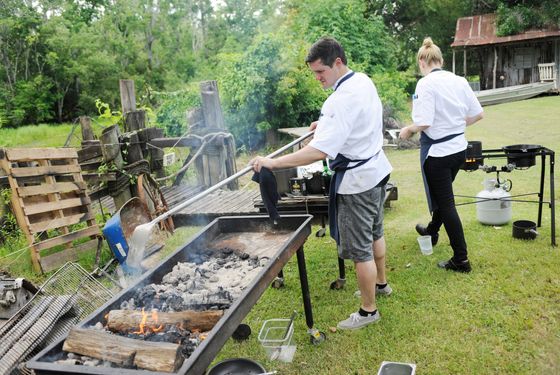 Stephanie thinks an alligator is going to eat her face. Last week’s win notwithstanding, you always get a worst-case scenario with Stephanie. But the worst-case scenario actually befalls Justin, whose precious fire burns out of control while he’s not paying attention, and overcooks his brisket.

And then a bunch of brightly dressed white people descend on the Bayou Barn and we are off to the races. Brian’s porchetta with mushrooms is a hit with Padma and Donald; Sara’s pork dim sum with crab and shrimp har gow impresses Tom; Justin’s wood-roasted pork-breast taco ends up being wood-scorched. On looks alone, Carlos’s pozole verde with fried chorizo tacos wins the taco-off. Shirley’s “Day After Chinese New Year” jiaozi dumpling with pork, grilled kidney, and crispy pork-fat salad is a crowd favorite: a local says it was “the only one with cracklin’. How do you do a boucherie without cracklin’?” (Crackling, like dripping, is one of those words that goes from neutral to absolutely disgusting when you drop the g.)

Louis goes all-out with a slow-grilled pork leg accompanied by spring onions, shiitakes, melted corn, and popcorn. It’s colorful, and popular with the crowd, but not with Tom and Hugh, who seem like the kind of people who are happy to tell the masses that they are wrong. Stephanie does pork brodo with pork belly and pickled summer vegetables, and Padma likes it all except the pork part, which would seem to be important. (Stephanie herself feels that the dish is incomplete, but she is the Cheftestant Who Cried Incomplete Dish.) Travis settles on a cajun-spiced pork ramen with pork-bone broth and collard greens, and of course Hugh raises an eyebrow at the store-bought noodles, but both he and Tom admit it’s tasty. Carrie makes crispy trotters (which sounds like a Louisiana politician or a Jeff Dunham puppet) with snap peas and pickled onions, and Tom seems to dig it.

Hugh and Tom say it’s going to be hard to pick a winner, but you know they’re going to rake the bottom three over the coals for the huge mistakes they’ll recognize later. Incidentally, are there any more surprising tattoos than the ones on Hugh Acheson? Such a patrician, Billy-Zane-in-Titanic bearing that guy has, and yet such carnival-ass tats!

Nicholas makes tête de cochon (that’s pig’s head to you and me) with summer beans, lemongrass vinaigrette, and wheat berries, and it looks like Spam, and that is not at all a knock.

Nina does braised-pig’s-head ragout with roasted corn, and mustard greens, and she’ll probably win out of the two head-to-head head dishes because the judges are straight-up on her dick.

Judges’ table time! Tom says it’s the most enjoyable food he’s had in eleven seasons. Everyone is proud of themselves except, of course, Stephanie. Shirley, Nina, Brian, and Carlos get the best reviews of the bunch. Padma found Justin’s pork too dry, and he protests: “It’s brisket! It was all fat!” Yes, but it was also on actual fire for a minute there, so Padma’s story checks out. Nobody liked Louis’s dish, except the actual party guests who came back for seconds and thirds. Travis gets called out for not making his own noodles. Hugh doesn’t like Stephanie’s pork belly.

Carlos wins! And our bottom three is Justin, Louis, and Stephanie. Justin is kind of a jerk about it. Tom thinks Stephanie’s dish was unfinished (echoing her own bad self-review, so she may be some kind of genius cheftestant savant), and that Louis had too many ideas going on. And ultimately, even though everyone agrees that Louis’s pork was cooked well, and even though this was a pork-cooking challenge, he’s sent home. For thematic confusion, I guess.

Anyway, I’m a vegetarian for at least the next couple of days. See you next week.