The last fish shack at the end of Manhattan. Photo: Hugh Merwin

Simply Seafood, the last tenant in the otherwise-abandoned mall at lower Manhattan’s Pier 17 has been ordered by a Manhattan Supreme Court judge to vacate the building so the property can be demolished. John and Joe Demane, the father and son owners, opened their food-court clam bar in the building in 1995. Until this week, they had been operating every single day, despite the derelict surroundings and low customer turnout.

The Howard Hughes Corporation, which controls the property as well as many other Seaport leases, has permits in place to tear down the building and replace it with a behemoth “world-class shopping, dining and entertainment venue.” A groundbreaking ceremony was held last month: Mayor Bloomberg and City Council member Margaret Chin posed with executives and shovels on the blue carpet. The mall had been waning for years, and the shops that managed to survive destruction during Sandy last year closed up for good in September. 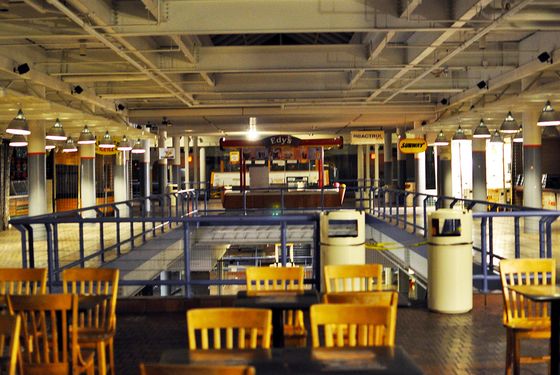 But the Demanes held out because they believed they had a legitimate lease that extended through 2020. For a few surreal weeks, Simply Seafood was open for business inside the abandoned mall, and getting there meant navigating a post-apocalyptic scene out of The Walking Dead: You needed to find the mall’s lone unlocked door and tell one of the many guards stationed around the property you were there for “Simply Seafood” — saying anything else meant you didn’t get any further. Once inside, you had to get on one of the endlessly looping escalators and head upstairs. On the third floor, past the deserted Spy Shop kiosk, just beyond the gutted Cajun Cafe, Simply Seafood was open at the end. At night the space was partially lit with a work lamp.

Despite the labyrinth, Simply Seafood had been open from 10 a.m. until 9 p.m. every day, serving crab salad and shrimp cocktail. Why bother? The Demanes’ lawyer advised them not to change a thing: Keeping irregular hours, or even just closing up early on slow nights, increased the chances that Howard Hughes could have used abandonment laws. As if to emphasize that point, there was a security camera pointed squarely at the tiny stand. The Demanes sold fried clam strips and $6.99 plates of fish and chips; whatever was left in the freezer, essentially. A coalition of neighborhood groups, including New Amsterdam Market, organized a party for the restaurant last Saturday. 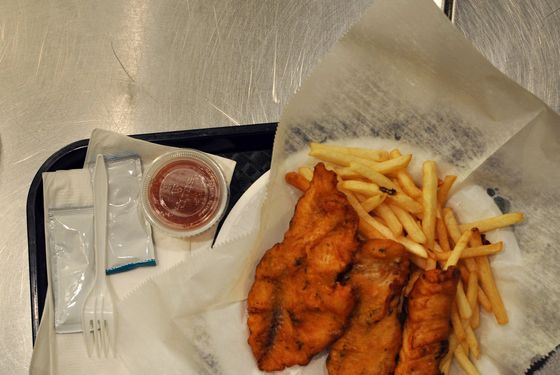 The last order of fish and chips.Photo: Hugh Merwin

But yesterday, a Manhattan Supreme Court judge determined that Simply Seafood owed more than $200,000 in back rent and utilities, stemming from the time the Demanes joined the lawsuit against the now-defunct Rouse Company. The ruling also stated that the restaurant had misreported its sales in figures supplied to the landlord, and owes the Howard Hughes Corporation back rent, plus interest and utilities. In an e-mailed statement, the Tribeca Tribune reports, the developer called Simply Seafood an “illegal, hold-over tenant” and said demolition will go ahead as planned. “While the Howard Hughes Corporation inherited this situation from the previous landlords,” it continued, “we are pleased that it has been resolved after a long and arduous process.”

While Sheriff’s deputies may take possession of the space as early as next Monday, the Demanes’ lawyer tells DNAInfo that the family plans to appeal the decision. In the meantime, Howard Hughes has not identified any of the tenants who will set up shop inside Pier 17’s glass-walled replacement, but the developer’s website touts a “grand reopening” date of 2015. 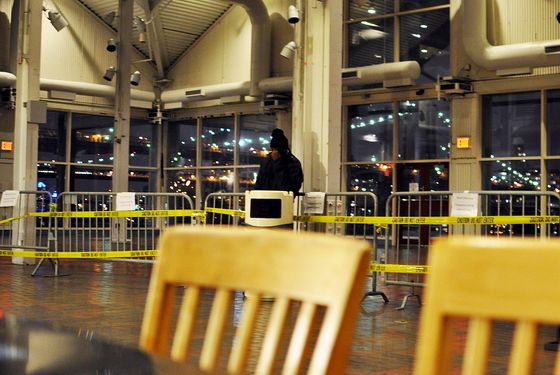 A security guard watches over one of the mall’s many cordoned-off areas.Photo: Hugh Merwin

Holdout Restaurant at Shuttered Pier 17 Gets the Boot by Judge [DNAinfo]
Judge Rules that Pier 17 Holdout, Simply Seafood, Can Be Evicted [Tribeca Tribune]

report Yesterday at 12:55 p.m.
Demand for Sexy Cakes Is Surging Bakers say business is way, way up.
By Ella Quittner
ukraine invasion May 16, 2022
You Won’t Be Able to Get a Big Mac in Moscow Ever Again McDonald’s is pulling out of Russia entirely as Putin’s invasion of Ukraine drags on — ending an era that began with promise.
report May 16, 2022
The Best Bagels in the World? They Might Be on Long Island. Hot and fresh and just off Jericho Turnpike.
By Jason Diamond
the grub street diet May 13, 2022
Rick Martínez Enjoys a Big Gathering “My ultimate fear in life is that I’m going to have a party and no one’s going to show up.”
By Rachel Sugar
the year i ate new york May 12, 2022
Opening Night at the Potato Palace Daniel Boulud’s latest restaurant, Le Gratin, is a low-key affair, for now.
By Tammie Teclemariam
report May 11, 2022
The Fascinating Mystery of Anna Wintour’s ‘Go-to’ Lunch Can you even call this a salad?
By Emilia Petrarca
lawsuits May 10, 2022
Mario Batali Acquitted in Boston Assault Trial The chef still faces a civil suit.
By Rachel Sugar
commentary May 10, 2022
Nobody Wins When Cops Harass Fruit Vendors Outrage was sparked by the arrest of María Falcon, a street vendor who works in a Brooklyn subway station.
the underground gourmet May 10, 2022
This 86-Year-Old Nonna Is Known As the Pasta Machine “During the pandemic, I’d drop off flour outside her door and she’d give me pasta. It was like a drug deal.”
By Rob Patronite and Robin Raisfeld
restaurant review May 9, 2022
The Hotel Chelsea’s El Quijote Is Back and Better Than Ever Few revivals have been more successful or unexpected than that of the 1930s-era Spanish restaurant.
By Adam Platt
chef shuffle May 6, 2022
A Chef Walks Into a Comedy Club … Einat Admony is working on her material and the menu at the Comedy Cellar.
By Kathleen Squires
the grub street diet May 6, 2022
Kilolo Strobert Loves That Breakfast Offers Unlimited Possibilities “You can eat anything you want!”
By Chris Crowley
first taste May 5, 2022
The $30 Steakhouse Dinner Skirt Steak offers a familiar combo of charred meat, all-you-can-eat fries, and long lines to get in.
By Adam Platt
the year i ate new york May 5, 2022
A Sandwich That’s Worth 192 Minutes on the Subway Fresh mootz on the first nice day of the year.
By Tammie Teclemariam
rsvp May 4, 2022
The Dinners That Preserve a 400-Year-Old Puppeteering Tradition Viennese cakes, Moravian wine, and marionettes at the Czecho-Slovak-Moravian-Silesian-Romani-Ruthenian-Polish-Hungarian-American Club.
By Joe Gutesha and Nastassia Lopez
interview May 3, 2022
Bar Pitti at 30 Chatting with Giovanni Tognozzi on the occasion of his three decades in business.
By Liz Barclay
interview May 2, 2022
The ‘Tumultuous’ Two-Year Journey to Take Over a Rockaways Icon Catching up with the new owners of Connolly’s.
More Stories