The finest luxuries tend to bring out the worst in people: high-end handbags are assembled in the poorest nations, the art world is rife with frauds, and the less said about the diamond trade, the better. The food world’s most luxurious products are no different: Tuber magnatum and Tuber melanosporum — white and black truffles, respectively — have created entire industries based on fraud and theft. It’s no secret why: truffles fetch thousands of dollars per pound and diners are said to experience euphoric sensations when eating them. (The Catholic church banned these so-called “devil’s fruits” during medieval times because of their hypnotic, aphrodisiac-like qualities.) And so, the truffle is a perennial temptress for hustlers and cons who, lured by the promise of a quick fortune, have become ensnared in the ingredient’s tangled history of scam, hijinks, and even murder. With truffle season in full swing, here are some of the most abhorrent truffle-related misdeeds, ranked from least egregious to most.

12. Truffle Gluttony
Truffles are the provenance of those who can afford them — and those who can really afford them tend to overdo it, even if they have no actual truffle appreciation. John Magazino, a truffle dealer for Baldor Speciality Foods, often makes deliveries to private clients who burn through pound after pound during the season. “They can’t stop themselves,” Magazino says, and warns that diners should not consume more than an ounce of truffles a day to prevent “gastric distress.” But nothing tops this story: A few years ago, Magazino says he heard reports that Jay-Z hit the Waverly Inn for a party, and ordered the restaurant’s famed truffle macaroni and cheese. Once the white truffles had been shaved onto the pasta, Jay then added his own element: hot sauce. As Magazino puts it, “Now that’s criminal.”

11. Truffle Tax Evasion
“Everything about the truffle business is secretive for two reasons,” Magazino says. The first is location. “A lot of truffle hunters park their cars in the bushes and take off into the woods during the middle of the night because they don’t want other people to know where they find their truffles.” The second is taxes. “If a guy finds a big truffle that’s worth $6,000, it’s very rare to find anyone who wants to share that with the French or Italian government. So he drives to a parking lot and meets a middleman buyer. It’s a like a drug deal. He hands the buyer the bag of truffles, takes the bag of cash, and that’s it.”

10. Customs Theft
Truffle dealers have a list of complaints: shipments of truffles from Italy that come up a few ounces short each season, and others that disappear during truffle season. And it seems customs officers sometimes can’t help themselves when presented with a trove of truffles. “You have to be careful they don’t go missing,” Magazino says. “Everyone in the business has bad stories with customs.”

9. Croatian Truffle Fraud
White truffles, the most coveted truffle there is, are of course dug up by pigs and dogs near Alba in the northern Italian province of Piedmont, right? Not necessarily: Across the Italian border in Croatia, producers have also discovered white truffles, and Croatian truffle hunters operate with far fewer rules and regulations than the Italians. So the crafty Croatians have been known to smuggle their own whites across the border into Italy, where dealers pass them off as Italian — and fetch higher prices as a result.

8. Dog Theft
One common theft in the truffle world has nothing to do with the truffles stolen, but arguably a more prized commodity: the dogs that sniff them up. The dogs that hunters train for years to find and locate truffles (dogs are more reliable than pigs, which often eat the truffles) are often stolen for hunts — only to be returned later. Patricia Wells, chef and author of Simply Truffles, says the dogs she uses for truffle-hunting classes have been stolen on multiple occasions. “There’s a certain tolerance,” she says of missing truffle dogs. “The first time it happened I was a bit alarmed, but after that I just laughed and took it as part of the truffle aura.”

7. Puppy Poisoning
Some truffle hunters are just as competitive, but much less humane: Instead of stealing a competitors’ dogs, some hunters just … eliminate them. Rival truffle hunters have been known to poison each others’s prized dogs, using tactics such as injecting meatballs with strychnine, a weed killer, and dropping the bait in the forest for the dogs to find. 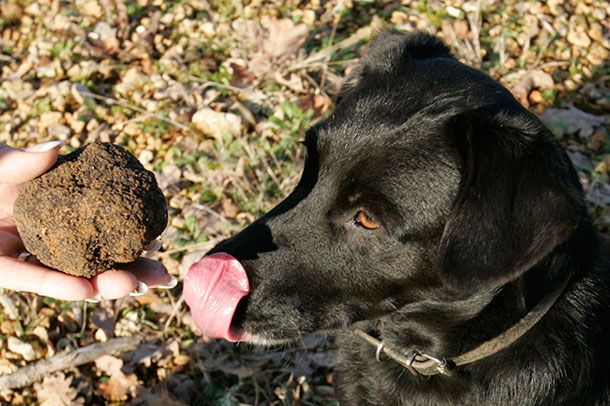 6. Truffle Muggings
Some thieves aren’t so crafty: In France, armed guards patrol many properties from bandits, and the markets in Provence are notorious for thugs who spot vulnerable dealers, follow them home, then rob them at gunpoint for their cash and leftover truffles.

5. Home Invasions
At least one truffle dealer in the Provencal town of Richerenches was the victim of an even more brazen theft: A burglar entered the dealer’s house through a chimney, no doubt on the hunt for any truffles the dealer was storing.

4. Honor Killings
A few years ago, young truffle producer Laurent Rambaud sat in a French jail while hundreds of supporters pleaded for his release. Why? Rambaud had reportedly shot and killed a man from Saint-Paul Trois Chateaux, a nearby village, for digging up his truffles. Walking out into his truffle groves in the middle of the night with his rifle, Rambaud reportedly spotted Chateaux and opened fire, striking the truffle thief first in the leg and then in the head.

3. Impostors from China
Like all luxury goods, truffles have their own low-cost Chinese knockoffs: While Chinese truffles look like their European cousins, they lack any of the flavor or aroma of the originals. Why would anyone buy them, then? Well, some suppliers simply douse them with truffle oil or drop them in boxes with real truffles to absorb the aroma and pad out their inventory.

2. Truffle Heists
The perfect storm of decreased supply, increased price, and Chinese truffle invasion has created a market ripe for criminal hijinks. In parts of southern France, home of the so-called “black diamonds,” truffle suppliers have become targets, and their depositories of natural fungi treated like banks. Ocean’s Eleven–style schemes aren’t unusual. And, a few years ago, a gang of truffle thugs used a bulldozer and crashed through the front gates of Plantin, a leading truffle supplier in Provence, and stole the company’s truffles and truffle products. “The robbers had used a stolen truck to take down the wall!” says a rep for Plantin.

1. Truffle Oil
No matter how heinous the acts above, no truffle crime can compare to the biggest fraud ever committed: the existence of truffle oil. The vast majority of truffle products don’t even have truffles in them. While the flavor of a real truffle comes from a natural process under the soil that’s proved impossible to mimic well, the truffle flavor in most truffle products is really 2,4-dithiapentane, a chemical compound. And yet, despite the artificial pedigree, companies still continue to command high prices for this junk.

Earlier: White Gold: A Look at the 2012 Italian Truffle Trade

Why the Closing of New York’s Lexus Restaurant Is a Real Loss
Why the Closing of New York’s Lexus Restaurant Is a Real Loss
All closings »
faqs 12:15 p.m.
What to Do If a Famous Anti-Vaxxer Walks Into the Restaurant Where You’re Eating Recent news suggests not all New York City restaurants are following vaccination regulations.
shopping Yesterday at 1:24 p.m.
The Cervo’s Team Launches a Preserved-Seafood Line “Our love of anchovies and sardines runs pretty deep.”
openings Yesterday at 9:54 a.m.
Inside Mena, Victoria Blamey’s First-Ever Solo Restaurant The new project opens this week.
By Mahira Rivers
the grub street diet Jan. 21, 2022
Chef Alexander Smalls Always Says Yes to Duck Eggs “I graduated from quail to duck. For me, it’s a more fertile taste.”
By Chris Crowley
it's soup season Jan. 20, 2022
Everything You Need to Know About ‘Soup Mother’ A new name for an ancient approach to cooking — and something we all might want to try.
the food biz Jan. 19, 2022
Battle of the Roasted Garlic Achaars A Trader Joe’s knockoff has put condiment-maker Brooklyn Delhi in a pickle.
By Rob Patronite and Robin Raisfeld
killed it Jan. 18, 2022
It’s Time to Bid Adieu to Cooking With Paris Maybe Paris Hilton’s cooking show was just too complicated for a world that values easy answers.
endorsements Jan. 18, 2022
A Sharper, Snappier, Picklier Health Salad Poulet Sans Tête’s version goes heavy on the cucumbers and skips the sugar.
restaurant review Jan. 18, 2022
Dining and Dashing at Semma Attempting to savor South Indian delights during a COVID surge.
By Adam Platt
rip Jan. 15, 2022
Good-bye to Ed Schoenfeld, a Man Who Changed the Way New York Ate The restaurateur and food-world impresario has passed away.
By Adam Platt
urban forager Jan. 14, 2022
At Té Company, the Persimmons Are Hung Up to Dry “The old way of preserving ingredients — for me, it’s fascinating.”
the grub street diet Jan. 14, 2022
Starlee Kine Spends Lunch Breaks With Her Dog “For every human that left the city, it seems a dog has been added.”
By Rachel Sugar
reopening Jan. 13, 2022
How Bad Has Omicron Been for New York’s Restaurants? As with everything these days, it depends who you ask.
By Chris Crowley
closings Jan. 13, 2022
Why the Closing of New York’s Lexus Restaurant Is a Real Loss Against all odds, it served as a worthy passport to food from around the world.
By Joshua David Stein
gifts they might actually want Jan. 12, 2022
The Best Gifts for Beer Lovers, According to Brewers and Beer Lovers Because you can do better than a novelty beer helmet.
omicron Jan. 12, 2022
Now We Have to Worry About Groceries, Too? Store shelves are looking emptier for some very real reasons.
members only Jan. 12, 2022
New York’s First NFT Restaurant Is Coming Soon. Wait — What? You’ve got questions. We’ve got (some) answers.
best in class Jan. 11, 2022
25 of the Very Best Drinking Glasses Twenty-one interior designers and service-industry professionals weigh in on their favorite glasses for water, juice, iced tea, or something stronger.
By Dominique Pariso
reopening Jan. 10, 2022
The Restaurant Industry Has Always Treated Sick Workers With No Remorse Will anything change because of Omicron?
By Chris Crowley
the grub street diet Jan. 7, 2022
Actor Jeff Hiller Is Eating His Feelings “My husband does basically all of the cooking and I just reap the benefits.”
By Chris Crowley
More Stories