Is that the most disdainful a cheftestant has ever looked? Photo: Bravo

These early Top Chef episodes are tough going. There are, by my count, just over 37,000 cheftestants still in the game, so there’s only time to characterize broadly. There’s Crying Lady, and there’s Curly Hair Guy. There’s Maternal Caribbean Woman, and there’s Hotsy-Totsy Australian Gal. There’s the Guy Who Everyone Keeps Reminding You Is Hot, and there’s Rachel Maddow in the Eventual Hallmark Channel Movie About the Government Shutdown. Everyone else’s faces whiz past you like the space debris in Gravity. There’s just no time to give these people depth when there are so many New Orleans clichés to exploit.

Like in tonight’s Quickfire: Each cheftestant must make a gumbo that reflects his or her cultural heritage. (What would yours be? I was halfway to my kitchen to start creating mine before I remembered that Velveeta Shells & Cheese is already a thing.) This challenge would seem to favor people with intriguing cultural stories — like Carrie, who’s an Iowan married to a Trinidadian, or Carlos, who grew up poor in Mexico before working his way up the restaurant ladder, or Nina, from the exotic and mysterious Saloosha. Indeed, local boys Justin and Michael are thrown; how can you culturally reinterpret New Orleans’s signature dish when your whole life has been spent in New Orleans kitchens? Michael gets frustrated with his and starts all over at 1:30 a.m. He’s had cancer, he explains, so he can do this kind of thing. It makes more sense the way he says it. (His hair also makes more sense when you consider that he’s had a brush with death. That’s some realigned-priorities hair right there.)

The gumbos will be judged by wise and sturdy local culinary legend Leah Chase. Leah Chase is like a Maya Angelou I’d like to get drunk with. (As opposed to the real Maya Angelou, whom I’d like to do mushrooms with.) Former drummer Aaron is worried because he’s never made a gumbo before, but he needn’t be. This is the age of deconstruction. Go nuts, young chef. Put a Jolly Rancher and a quail egg on a small pile of hay, and let Padma figure it out.

Indeed, each chef seems to interpret “gumbo” as “small bowl of whatever.” Michael and his hair serve up a little drunken-chicken number, Aussie Janine does a curry dish, Nina cooks a Salooshan plantain and yuca thing, Very-Handsome-If-You-Think-Max-Headroom-Is-Handsome Jason makes a Polish beet and potato gumbo that Leah and Padma are not feeling. (But at least he takes it well: “That’s bullshit! I know that dish tasted good.” Boys who know they’re good-looking are the worst.) Aaron gets high marks for serving up shrimp heads, as he well should; who doesn’t like to eat a face? Carrie takes home the win with an Iowa/Trinidad mash-up that is at least colorful, which is a relief in a sea of brown.

And right away, we’re into the Elimination Challenge, which will be judged by yet another culinary legend I am only now hearing about for the very first time: Susan Spicer! And it will involve another culinary trend I’m pretty much over: food trucks! The remaining 18 cheftestants — boy, that word does not get less annoying to type — will divide into groups and serve truck-lunches to Habitat for Humanity volunteers who are, depressingly, still rebuilding houses that were ravaged by Hurricane Katrina. Fun fact to pull you out of this emotional tailspin: I have a friend named Katrina whose birthday is September 11.

Real quick: Do you guys agree that we’ve achieved peak food truck? Have you come back around to the notion that tables, chairs, and servers are valuable? How do you feel about telling your grandchildren that in the early twenty-first century — while wars, famine, and environmental catastrophes plagued our planet — we used smartphones to chase grilled cheeses around our urban areas?

Before the food truck challenge begins, Michael throws his co-testants a crawfish boil, giving us all the chance to look very closely at crawfish, which was not a thing I had any particular interest in doing. So far, New Orleans is not getting the best PR: According to Top Chef Season 11, it is a place where you stand in swamps, drink sugar, and eat bugs, and then every few years, your house blows down.

The Yellow Team has some serious ringers in Carrie, Carlos, and Aaron, and they decide to go for a taco-truck theme. Blue has prissy Brett, weepy Patty, gruff-but-lovable Nick, and Jason, who should be sick to death of being told how handsome he is, but seems to be hanging in there with it. They opt for a surf-food thing, and their strategy seems to involve putting Jason front and center, hoping he’ll take his shirt off, and not much else. The Green Team, with Sara, Stephanie, Shirley, and Louis, goes with a Mediterranean theme, because what’s more refreshing after a humid day of rebuilding a house than shawarma? Lastly, the Red Team, with Michael, Janine, and Bene, opts for Southern-food-meets-Miami menu, which could mean just about anything. Janine does say she wants to create a “white Bloody Mary.” Would this beverage be to the traditional Bloody Mary what New England Clam Chowder is to Manhattan Clam Chowder? If so, may I invite Janine to get the fuck out of town because that’s the best thing I’ve ever heard? 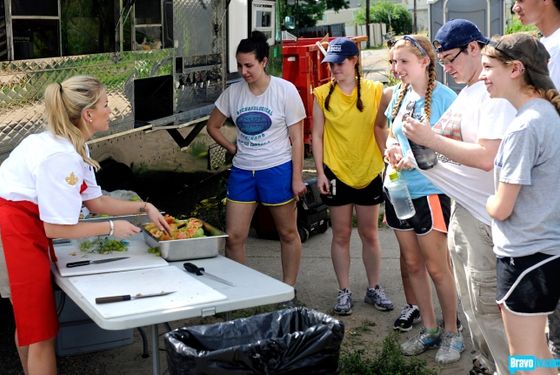 Who decided to set up the truck in the middle of a jogging path?Photo: Bravo

Also, several times in tonight’s episode, the lower third of the screen is taken up by a Toyota-sponsored audience-participation situation where they ask a question, and I guess you go to the Bravo website as fast as you can to answer it, and the results show up right there on-screen. Like, right at this point, Toyota wants to know how many times a week you eat at a food truck, from one to nine. Nine? Who are you people who eat nine food truck meals a week? Is that even possible? Are you aware that there are restaurants with full-sized kitchens that are anchored to the ground? (The national average, as insta-tabulated by Toyota and Bravotv.com: two. Still too many.)

Teamwork wise, the Red Team is a little tense, with poor Bene being relegated to a support role, but everyone else gets along okay. It’s possible that even they can’t tell each other apart enough to have personality conflicts yet.

The Yellow Team’s taco truck is heavy on empanadas and ceviches, but OH MY their one taco looks good: It’s tilapia on a spinach tortilla with some red onion and I’m aware that I’m only reacting to the colors, but I still need for it to be in my mouth.

Jason on the Blue Team decides to make his salmon rolls all at once right at the beginning, so he has more time to stand in front of the truck and be handsome, and the plan backfires when the rolls instantly get soggy. Brett’s ceviche is paired with scorching-hot plantains. Patty makes tuna sliders with some special kind of tomato I’ve never heard of, but apparently, it’s not in season and it tastes bad and everyone is furious at Patty and her bullshit tomato.

The closest I’m going to get to my White Bloody Mary is the green-tomato gazpacho the Red Team serves up. There’s also some kind of a fritter with corn purée and bacon jam, which may well de-throne Space Jam as my favorite jam.

The Green Team starts their meals with chilled pieces of watermelon on a stick, which is simple and smart. Sara also does a tuna burger, but hers looks lighter and healthier. Overall, their dishes are light, but substantial. Theirs is the only truck with any kind of thematic consistency; tonight, everyone else forgets that a food truck needs a strong brand, otherwise it’s just a weird restaurant that keeps hiding from you. 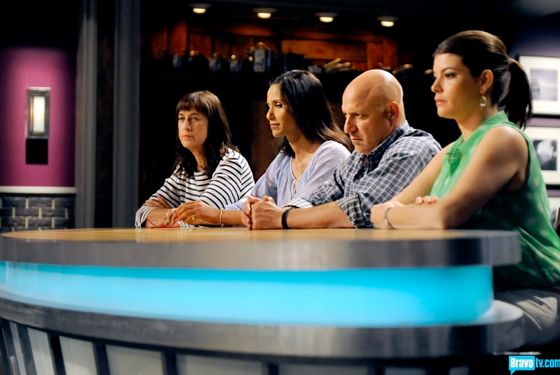 And indeed, it’s the Greens and the Yellows who come out on top in the challenge. Carrie, who had immunity for winning the Quickfire, goes and wins the whole challenge anyway, which is just cold. The Blues lose, and they take it badly: Brett argues that at least their food didn’t run out, and Tom argues back that if other teams’ food ran out, that means more people came back for seconds. You can see the moment when it registers on Brett’s face that Tom’s right, and I rewind it six times.

But ultimately, it is Jason who is invited to be handsome somewhere else, and he dies the way he lived: “I know for a fact my salmon roll was good.” He has a tender goodbye with Nick, the Pacey to his Dawson, and then vows culinary revenge via the “Last Chance Kitchen,” which — I’m new here — is that a thing, or does he just assume he’ll be given another chance because he’s attractive?

Off to the kitchen to start workshopping my White Bloody Mary. Miracle Whip and vodka, anyone?

Top Chef NOLA Recap: Who Doesn’t Like to Eat a Face?

Del Posto Is a Goner
Del Posto Is a Goner
All closings »
the grub street diet Yesterday at 6:00 a.m.
Casey Wilson Prefers Her Chicken Parm in Bed “No one loves that about me, but it’s my truth.”
By Alyssa Shelasky
encounter June 10, 2021
Victoria Blamey Is Free “I had never been presented with the opportunity to just do me.”
By Andrea Strong
pizza June 10, 2021
De Blasio’s Ranking of Pizza Toppings Is Only Somewhat Wrong Peppers beat pineapples, and olives make an unexpectedly strong showing.
previews June 10, 2021
Here’s Where You’ll Be Eating Next Saraghina Caffè, Sixty Three Clinton, Runner Up, and more.
By Rob Patronite, Robin Raisfeld, and Rachel Sugar
reopening June 9, 2021
Everything You Need to Know About Eating in Restaurants Right Now The world has changed. So have dining rooms.
By Rachel Sugar
nightlife June 9, 2021
56 Places We’ll Be Drinking, Dancing, and Hanging Out Too Late This Summer A sprawling sidewalk cocktail resort on the Lower East Side, a techno-heavy, clothing-light party in East Williamsburg, and more.
By Brock Colyar
rip June 8, 2021
The Instagram Memorial of Anthony Bourdain Why do so many people still leave comments each day?
the return of restaurants June 8, 2021
Where Did You Go for Your First Big Post-Vaxx Meal Out? With Representative Carolyn Maloney, Padma Lakshmi, and more.
reopening June 7, 2021
Now Is Not the Time to Skimp on Tips Restaurants are getting busier while struggling to staff up, and the people working have more on their plates.
announcements June 7, 2021
Introducing are u coming?, a New Nightlife Newsletter Late night dispatches from a city ready to party.
where to eat June 7, 2021
66 of the Best New (or Newly Relevant) Places to Eat Here’s your official summer 2021 restaurant guide.
By Rob Patronite and Robin Raisfeld
the grub street diet June 4, 2021
Alice Waters Knows California Doesn’t Have It All “The tomatoes are good here but not like Jersey.”
By Chris Crowley
meat June 3, 2021
Can Jay Cutler Score With His New Meat Business? The former NFL pro has partnered with Pat LaFrieda on a subscription box.
father's day 2021 June 3, 2021
The Best Gifts for Foodie Dads Foolproof ideas for the dad who says the quickest way to his heart is through his stomach.
trailer mix June 3, 2021
Anthony Bourdain Leaves No Parts Unknown in His Roadrunner Documentary Trailer “Travel isn’t always pretty. You go away, you learn, you get scarred, marked, changed in the process.”
juice June 3, 2021
Meet the Fashion World’s Favorite Juice Pusher What New York lacks in Erewhon, we gain with Tom.
small bites June 2, 2021
Free Costco Samples Are Back, Baby Nature is healing, etc.
reopening June 2, 2021
NYC’s Late-Night Restaurants Aren’t Fully Back — Yet The city continues to sleep.
openings June 1, 2021
Casual, Community-Minded Dame Is the Restaurant We’ve Been Waiting For It’s the house that fish and chips built.
By Robin Raisfeld and Rob Patronite
silver linings June 1, 2021
In Praise of Small Menus True luxury is having someone else make decisions for you.
More Stories