Most cocktails follow standard recipes, but the martini — though it contains only two ingredients — is a spectrum of near-infinite arrangements. This lack of specificity grants the martini its unique power to inspire loyalty and debate, and it’s why everyone has his or her own preferred version.

Because there are so few factors — gin or vodka, proportion of vermouth, shaken versus stirred, and garnish — people can devote a lot of thought to each. (Liking your martini “dirty” doesn’t factor in because it’s gross.) I asked John Hodgman, known to love a good martini, about his own preferred method, and this is what he wrote back:

I don’t mind dropping a name. I learned my martini from Dale DeGroff when he was a client — his Craft of the Cocktail is still a staple of my bar and every good bar, as it opened the door to the current mixological revolution. He takes his with a twist and an olive. I do only the twist, but I still flame the lemon peel, DeGroff style, and seek every day to emulate his deft dash of vermouth.

Since then, my own technique is: Ice into the glass mixer, gin to the count of five, a DeGroffian deft dash of vermouth — I’m liking Dolin — stir it 52 times without agitating the ice too much, julep strain it into a three to four-ounce chilled martini glass. You can keep it in the fridge but NOT the freezer. Garnish with sparks of lemon oil expressed from peel of same. Drop that squeezed peel into the drink and drink.

The only thing that matters beyond this is gin, which to my palate should be a London-style dry gin. NOTHING TOO BOTANICAL. Bombay, but not Bombay Sapphire. New York Distilling Co’s Perry’s Tot, a Navy Strength gin, is lovely. Plymouth is the finest by me, and they recently dropped the Art Deco nonsense from their bottle and put the ship back on the label. But it’s routinely overpriced in most stores, and the truth is Beefeater is lovely in a pinch.

The Ratio Issue
Hodgman isn’t alone in his specificity: Churchill famously had a whole thing about merely bowing toward France when mixing a martini instead of using any actual vermouth; Robert DeNiro likes his shaken 30 to 45 seconds longer than “the way they teach you in bartending school” so it gets those cool ice chips on top when it’s poured; Hemingway called his preferred martini ratio — fifteen parts gin to one part vermouth — the Montgomery, named for a British general who would only go into battle if his forces outnumbered his foe’s fifteen to one.

Hemingway’s martini ratio is aggressively dry — it’s almost all gin, after all — but most serious martini drinkers have their own ratios down. (Mine’s three-to-one.) Some people really steeped in martini history will go so far as to mix the gin and vermouth in equal parts, and drink-world luminaries Dave Wondrich and Ted “Dr. Cocktail” Haigh have both gone on record professing an affinity for a five-to-one gin-to-vermouth mix. The classic, middle-of-the-dryness-road standard lands at four-to-one.

But the spirit world is evolving, my friends. The explosion of small-batch booze being made around the country has made simple ratio conventions feel outdated.

Here’s why: Newer gins — i.e., Greenhook gin, Roundhouse gin — are all over the place proof-wise, so using an established go-to martini ratio regardless of the gin you’re using doesn’t really make sense. The perfect four-to-one martini ratio you honed for Plymouth (which is 41.2 percent alcohol) will create a completely different drink if you use it with, say, Perry’s Tot Navy Strength gin (a skull-crushing 114 proof, a.k.a. 57 percent alcohol).

The Path to a More Consistent Martini
We at the Sloshed HQ Drinkatorium hereby propose a new martini variable to consider: alcohol by volume (ABV), which, as the name implies, factors in the alcohol content of your ingredients and, consequently, the finished drink.

The strength of a finished drink matters way more than we give it credit for. The higher in alcohol something is, the more pure ethanol it has, which means, of course, that it tastes more like pure ethanol. This makes it much harsher to drink straight and requires more vermouth to create balance.

So here’s the plan: We’ve put together a simple formula that you can use to figure out how strong you like your own martinis. Then, equipped with that knowledge — call it your Ideal Martini ABV (IMABV) — you will be able to figure out what gin-to-vermouth ratio to use for any newfangled high- or low-proof spirit brand you might encounter. (Ice dilutes your martini as you chill it, of course, but provided you always chill your martinis the same way, that dilution will remain consistent, and so it should not affect your IMABV.)

The Method
First, make your personal martini with the gin and vermouth brands you most often use and note their ABV or proof. (For beginners, a spirit’s proof is just double its ABV, so a 100-proof gin is 50 percent ABV — and all booze has this info printed right on the bottle.) My martini is a three-to-one gin-to-vermouth ratio with a 92-proof gin and a standard-issue 18 percent vermouth.

For algebra nerds, here’s how the formula looks:

So for example if I make my preferred three-to-one martini with 46 percent gin and 18 percent vermouth, the forumla is:

And now I can figure out that if I only have access to an 80-proof gin (40 ABV before you add any vermouth) that means I’ve got to go the full fifteen-to-one Hemingway ratio to make my finished martini as strong as I typically like it. (Hemingway being Hemingway, it’s not impossible to imagine that he actually drank martinis made with fifteen ounces of gin, but a normal person should stick to four or five ounces of gin and simply bring the vermouth way down.)

The scaling is relatively straightforward, but to help out, Sloshed’s graphics department put together this easy cheat sheet. The red line indicates my IMABV, and yours will be different.

We’ve tracked three strengths of gin — 80 proof, a more-standard 92 proof, and some insane 115-proof navy-strength stuff — and charted their ratios and final martini ABVs. Once you know where your own line falls, you simply find the point on the graph that matches your preference, and the gin you’re using, and you’ll be able to see what gin-to-vermouth ratio you should use to nail your IMABV. 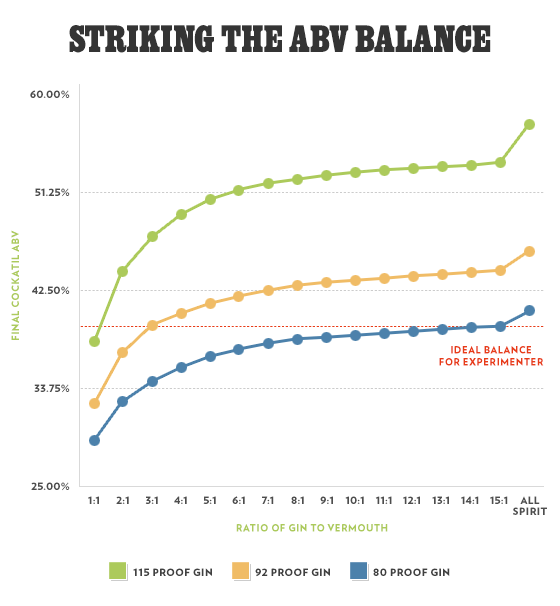 Conclusions
Equipped with this new, mathematically enlightened information, you can go back to noodling around with everything else: Is your preferred garnish a lemon twist, olives, or the retro-leaning cocktail onions? Do you like a couple of drops of orange bitters? (Highly recommended.) Or perhaps you will be the kind of drinker who can actually order a shaken martini without feeling like you’re just doing it because that’s how James Bond does it.

When you’ve got it all figured out, you will know, with certainty, that your signature martini is perfectly calibrated. And nobody can tell you that your preferred martini method is wrong. Unless you order it dirty.