Someone snapped this photo that had been posted inside the front window of Amarillo, Texas, restaurant Sava! Italiano, which recently closed and shuffled off to Lubbock. The restaurant had been open for a year, and from the sound of things, just couldn’t connect with the local customer base. A bunch of obscene and mixed metaphors, straight ahead. 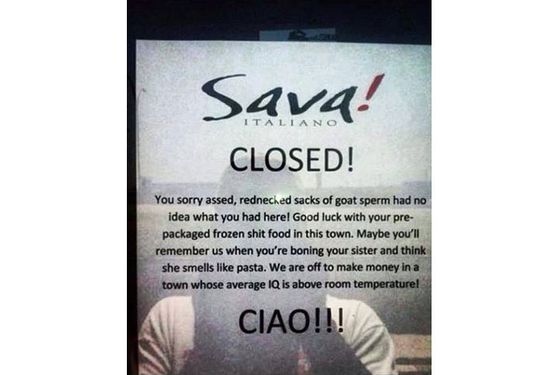 Here’s that message in full:

You sorry assed, rednecked sacks of goat sperm had no idea what you had here! Good luck with your pre-packaged frozen shit food in this town. Maybe you’ll remember us when you’re boning your sister and think she smells like pasta. We are off to make money in a town whose average IQ is above room temperature! CIAO!!!

The photo promptly went viral on Reddit and the “goat sperm”-tinged send-off has already been picked up by local radio.

This morning, chef-owner Mark Coffman called the sign a “nasty joke” on Facebook. In an e-mail to Grub Street, he denied responsibility, writing:

Yes it was a JOKE… Nobody ever saw it up and it is not up now. It appears somebody put it up, took a pic and then took it down. We’ve got a cook that’s filed unemployment and we’re fighting it. That’s about all I can figure out at this point.

Coffman adds that he’s still trying to determine who posted the sign before it was taken down. Based on our analysis of the message, he should probably be looking for someone who has a superiority complex, disdain for frozen food, and a serious problem with goats.