There will be pour-over. Photo: Courtesy of Blue Bottle Coffee

The San Francisco– and New York–based coffee company will open a second café in Brooklyn, at 85 Dean Street, on the border of Cobble Hill and Boerum Hill. The newest Blue Bottle will occupy approximately 260 square feet in an old real-estate office just off Smith Street, an address that happens to be a block from the Bergen F/G subway station. The shop may be a bit smaller than its hangar-size Williamsburg counterpart, but it will offer the same menu of pour-over coffee and espresso drinks as well as hot and cold beverages made from an ever-changing lineup of single-origin beans. 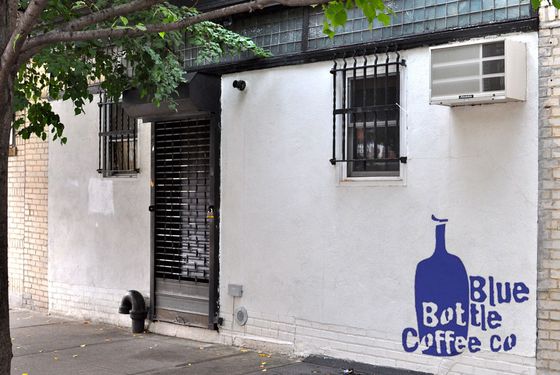 The future home of Blue Bottle on Dean Street. (We added the logo for easy I.D.)Photo: Hugh Merwin/Blue Bottle Coffee

The renovated space likely will not feature lounge-worthy interior seating, but, like other Blue Bottle locations, there will be a long stand-up bar set up by the front window for guests. The Dean Street Blue Bottle will be the Oakland chain’s sixth New York location overall — the coffee company is leaving All Good Things in Tribeca at the end of September, but another location will open this fall at Gotham West Market.

A representative for Blue Bottle says the café will open either late this fall or in early 2014.

moving Yesterday at 11:19 a.m.
The Famously Tiny I Sodi Is Moving to Bigger Digs Rita Sodi’s beloved little dining room will move — and finally get a bit bigger.
openings Nov. 29, 2022
The Many Influences of Kwame Onwuachi The chef puts his own history on the menu at Tatiana.
By Tiffany Martinbrough
best in class Nov. 28, 2022
11 of the Very Best Air Fryers Custard toast at the ready.
feature Nov. 28, 2022
This Tasting Menu Tastes Like Pot A cross-country dive into high-flying, super-high dollar cannabis cuisine.
By Adam Platt
emergency discussion Nov. 22, 2022
The Menu Gets That Fine Dining Is a Cult Obscure location, insufferable clientele, and staff at the end of their rope — this horror-comedy’s got a lot in common with reality.
By Chris Crowley and Adam Platt
holiday gifts 2022 Nov. 21, 2022
The Best Gifts for Beer Lovers, According to Brewers and Beer Lovers Because you can do better than a novelty beer helmet.
profile Nov. 21, 2022
Scarr’s Pizza Is Expanding — and Adding a Sushi Counter How Scarr Pimentel became Orchard Street royalty.
By Tammie Teclemariam
the grub street diet Nov. 18, 2022
Jeremiah Moss Wishes Arturo’s Would Open Earlier “I feel like I’m betraying myself somehow when I eat nice food.”
By Alan Sytsma
the year i ate new york Nov. 17, 2022
Where to Watch the World Cup Our diner-at-large goes looking for that perfect 5 a.m. sports bar.
By Tammie Teclemariam
closings Nov. 15, 2022
Good-bye to Pearl, the Oyster Bar That Launched a Million Lobster Rolls “A perfect storm” of calamities led to the restaurant’s closing, according to owner Rebecca Charles.
By Steve Garbarino
openings Nov. 14, 2022
The Race to Finish Rockefeller Center’s Restaurants A handful of ambitious new spots are all vying for the attention of, well, everyone.
By Chris Crowley
the grub street diet Nov. 11, 2022
Margo Price Stops for Tacos in Texas and Katz’s in New York “Tonight we might get stoned and go eat a hot dog.”
By Alan Sytsma
the year i ate new york Nov. 10, 2022
Detours and Seafood in Jackson Heights What to do when a food pilgrimage doesn’t go as planned.
By Tammie Teclemariam
scenes Nov. 8, 2022
Saturday Night at Slutty Vegan Brooklyn’s best party is a line for veggie burgers.
By Chris Crowley
grub guide Nov. 7, 2022
11 Extraordinary Pies for Thanksgiving From the city’s most exciting new bakeries.
By Charlotte Druckman
the grub street diet Nov. 4, 2022
Zosia Mamet Shares Swedish Fish With Her Horse “I ride my horse pretty much every day, and I’m terrified of getting hungry.”
By Zach Schiffman
openings Nov. 3, 2022
A Ukrainian Bar Arrives in Soho Slava opens in the former Pegu Club space.
By Robert Simonson
the year i ate new york Nov. 3, 2022
Our Diner-at-Large’s New Favorite Restaurant At Syko, stock up on meze while you grab a bulgogi fatboy for the road.
By Tammie Teclemariam
remembrances Nov. 2, 2022
A Messy, Exuberant Keeper of Both House and Head In the ebullient too-muchness of her life as she shared it with us, Julie & Julia author Julie Powell reported on it like we were her pals.
openings Nov. 2, 2022
Pizza Obsessive Anthony Mangieri Opens Caffè Napoletana On Saturday mornings, Una Pizza Napoletana will transform into an Italian coffee counter.
More Stories