Earlier this summer, Bien Cuit’s West Village location was flooded just after its Smith Street flagship celebrated its jubilant two-year anniversary. The bakery’s floorboards were damaged, but owners Zachary Golper and Kate Wheatcroft quickly found themselves set back by other flood-related issues. “It turned out to extend beyond the floors,” says Wheatcroft, and the location’s future currently has yet to be determined. “We’re looking into every possibility,” Wheatcroft says, explaining that no decisions have yet been made. “Maybe it’ll take six months. It could be sooner, but we’re just not sure.” In the meantime, Bien Cuit in Boerum Hill is expanding its menu yet again, and the roster of new breakfast items and sandwiches will begin rolling out next week. The full lineup, which looks killer, is straight ahead. 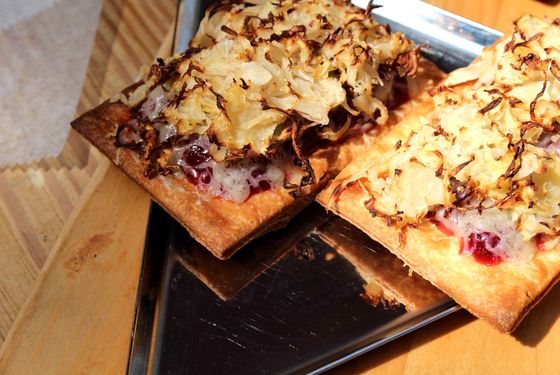 Look for the menu items at Bien Cuit starting September 15.

The Future of Bien Cuit’s West Village Location Is TBD, But Here’s

openings 10:53 a.m.
At Pecking House, the Line Is Finally Manageable You don’t have to wait for New York’s hottest fried chicken anymore.
By Chris Crowley
openings Yesterday at 10:05 a.m.
Urban Hawker Brings Singapore to Midtown Inside the new food hall, which features 11 vendors from the island nation.
By Mahira Rivers
best in class Sept. 16, 2022
11 of the Very Best Air Fryers Custard toast at the ready.
the grub street diet Sept. 16, 2022
Karen Chee Is Looking Forward to Her Morning Egg “Peeling the shell is like unwrapping a gift.”
By Rachel Sugar
the year i ate new york Sept. 15, 2022
What’s Wrong With Cocktails Right Now? Bartenders and drinkers both seem a bit bored.
By Tammie Teclemariam
rip Sept. 14, 2022
RIP to the Wine Genius Who Created Two-Buck Chuck Fred Franzia had a way with words too.
gifts they might actually want Sept. 14, 2022
The Best Gifts for Beer Lovers, According to Brewers and Beer Lovers Because you can do better than a novelty beer helmet.
openings Sept. 14, 2022
A Le Coucou Chef Has Taken Over at Manhatta Justin Bogle breaks down the technique on a dozen new dishes.
By Joshua David Stein
report Sept. 12, 2022
Why Have Restaurant Menus Gotten So Simple? Call it the great pare-down.
By Chris Crowley
the grub street diet Sept. 9, 2022
Emma Steiger Eats Dinner at 3:30 — and Again at 10:45 “Even when we ordered, we knew it was too much food.”
By Alan Sytsma
reopening Sept. 8, 2022
Great N.Y. Noodletown Makes Its Triumphant Return A long-delayed reopening has finally happened.
By Chris Crowley
rsvp Sept. 7, 2022
What It’s Really Like Inside a Blindfolded Dinner “The customer is really surrendering to the chef — it’s a lot of trust.”
By Megan Paetzhold
cooking Sept. 6, 2022
The Dinner Party Is Over No more cleaning up.
By Emily Sundberg
the grub street diet Sept. 2, 2022
Galen Druke Has Been Getting Into Protein Shakes “This is probably the most embarrassing part of my diet I’ll admit to, so I might as well get it out of the way up front.”
By Zach Schiffman
the year i ate new york Sept. 1, 2022
Pretending to Vacation in Bushwick Reliving my early 20s during the last unofficial week of summer.
By Tammie Teclemariam
commentary Aug. 31, 2022
Should You Still Pay For Dinner If You Were Robbed While You Ate It? An etiquette question for the age of outdoor dining.
fall preview 2022 Aug. 29, 2022
The New Restaurants You Need to Know About So many openings.
By Alan Sytsma
the grub street diet Aug. 26, 2022
Morgan Jerkins Buys Her Snacks Before the Edibles Hit “Who wants to walk around the corner when you’re really stoned?”
By Alan Sytsma
openings Aug. 25, 2022
A New Chophouse Is Opening in Brownstone Brooklyn Gus’s debuts next week in Carroll Gardens.
By Andrea Strong
the year i ate new york Aug. 24, 2022
Where to Eat (or Get a Massage) in Flushing If you’re taking the train to watch the U.S. Open, you may as well have a decent meal too.
By Tammie Teclemariam
More Stories