Top Chef Masters, the incredible program on the popular Bravo TV network, was back with episode three of season five last night, and it was so awesome I almost had an aneurysm.

Things got off to a crazy start as host Curtis Stone walked out in this purple sweater that no one saw coming, not even his stylist, I bet. You could tell he was all like, What? So I’m wearing a purple sweater that really brings out my eyes and accentuates my well-sculpted torso. Calm down! But I swear all the chefs really struggled getting through the segment without having to change underpants.

As usual, Curtis’s hair looked great, too. I don’t know how much money or how many man hours are put into giving it that effortless look he’s got going, but it’s totally worth it. Also, as I’ve stated in the past, I am so not gay it’s not even fucking funny, but if Curtis Stone ever wanted to form a fantasy football league or do Pilates with me or whatever, I would do it in a heartbeat, and he wouldn’t have to ask twice.

Anyway, as part of this week’s sous-chef challenge, the sous-chefs had to make sausage and then give whatever bullshit scraps they had left afterward to the chefs so they could make even more sausage in the Quick Fire Challenge. There were duck butts, venison spleens, and even horse dicks in there, probably. It was nuts. The chefs were all bitching about it like they didn’t realize that sausage by definition is pretty much horse dicks and whatever you’ve got in your spice rack, but after a couple of minutes of moaning they got down to business.

At the beginning of the round, chef Bryan Voltaggio said something about how he wanted to make a sausage that “tells the story of who I am,” which sounded insane at first, but when I added the phrase “in my pants” to it in my brain afterward it sounded really awesome and I started to like him a lot. Meanwhile, chef David Burke broke out a gold duck press with actual gold duck feet as its base, which was awesome but didn’t help him win at all, which is bullshit because how awesome is anything with gold duck feet on it?! Pretty awesome.

As usual, the judges for the Quick Fire Challenge were total dicks about it but still somehow brought themselves to decide that Sang Yoon’s larb dish was the best, after which all the other chefs pretended to be happy for him in their typical fashion even though you could tell they all wanted to stuff him into a duffle bag and then pay some guy with an eye patch to throw him into the river late, late at night or something.

Next up was the Elimination Challenge. This time around, the chefs were to prepare dishes for the cast of the popular soap opera Days of Our Lives, which isn’t nearly as good as All My Children, the incredible soap opera starring Susan Lucci, the greatest actress of all time and woman of my dreams, but whatever. Susan was probably busy being radiant and having mourning doves fly out of her majestic vagina somewhere or something, so I completely get it.

As part of the Days of Our Lives theme, the chefs were asked to cook something either sex-, greed-, or murder-themed, which was great. Adding to the fun, three of the chefs — Sang, Bryan, and Franklin — were forced to take half-hour time-outs of sorts where they had to pretend to have been murdered, put in jail, and knocked into a damn coma respectively. It was my sense that America just couldn’t get enough of this added fun even though Sang, Bryan, and Franklin were all like, “Seriously?!” about it.

Once all the chefs got done, the Days of Our Lives cast came out and told all of them how much they suck at cooking. Susan Lucci wouldn’t have pulled that shit in a million years, but that’s only because she is a really classy superfox who I would have sexual intercourse with in a heartbeat even if I had to swim through a river of chef David Burke’s discarded bathwater to do it. 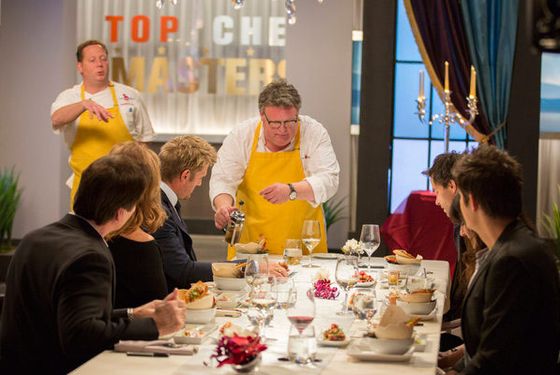 After the Days of Our Lives cast got done bitching about pretty much everything, the judges came out to further emphasize how sucky all the food was with a few exceptions. As you can probably imagine, judge Gail Simmons looked great, and if things between Susan Lucci and me for whatever reason don’t work out, I could totally see making a nice life for myself with Gail where we head out to Montauk on weekends and make sweet, sweet love right there out on the porch pretty much every night, and the neighbors won’t be able to say shit about it.

Anyway, the winners this time around were chef Franklin Bash, Sue Zemanick, and Jennifer Jasinski, who ultimately beat the crap out of everyone with her seared duck breast and citrus-chili duck sausage with fregola and celery salad, the only Susan Lucci–worthy dish of the bunch as far as this expert culinary writer is concerned.

Bringing up the rear in the Elimination Challenge were Douglas Keane, Lynn Crawford, and Odette Fada, who was sent packing for the attempted manslaughter that was her mushroom and soft egg yolk raviolo. The judges all acted like they were really sorry to see her go, but I bet if they ever run into her at Whole Foods or Cinnabon or wherever they’ll just pretend like they are getting a phone call and get out of there as quickly as possible so they don’t have to deal with her goddamn whining.

For the record, though, if things between me and Gail Simmons don’t work out for whatever reason, I could totally see having some fling with Odette where we get up to all sorts of weird shit for a couple of weeks at least. Something about the hair.

Tune in for episode four of this incredible program next Wednesday at 10:30 p.m. on Bravo, the network that also has Watch What Happens: Live with Andy Cohen, a show that should have me on if they want to have some guy with incredible hair on who now knows so much about Top Chef Masters it’s actually kind of weird.

Top Chef Masters Recap: Dave Hill on Sausage Fixins and the Majesty of