Even as more stringent precincts call for healthier food across the country, America’s state fairs remain a safe haven for freak-flag corn dogs, funnel cakes, and self-expression through creative deep-frying. Here’s how we know that tradition isn’t going anywhere: The Minnesota State Fair — which claims to have the largest daily attendance of any state fair in the country — just announced the new foods that will be available in 2013, and they do not disappoint. The fair itself doesn’t kick off until next month, but in the spirit of the Fourth of July, now seems like the right time for Grub to share a preview of this amazing celebration of indulgence. 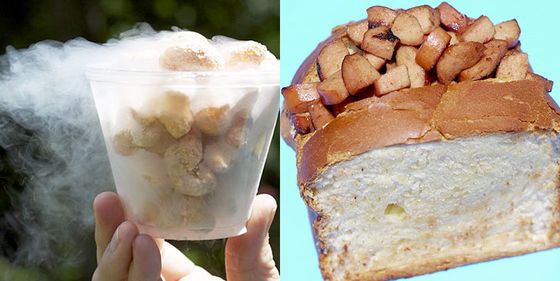 Dwellers of Earth, say hello to Comet Corn, described as a “futuristic caramel corn made with liquid nitrogen.” Sub-zero temps mean one breathes vapor trails of “comet dust” that leave a “tingly, bubbly feeling.” The prophecies were true.

A griddled and chopped Kramarczuk all-beef wiener chopped into pieces and stuffed into a Pullman bread pocket so large you could probably turn it upside down, shake out the loose change, then crawl inside and take a nap. 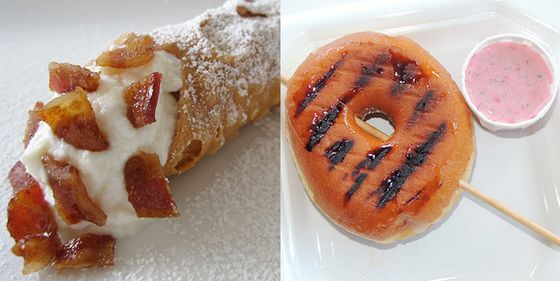 Of course there’s a bacon cannoli. And it’s a class act, too. 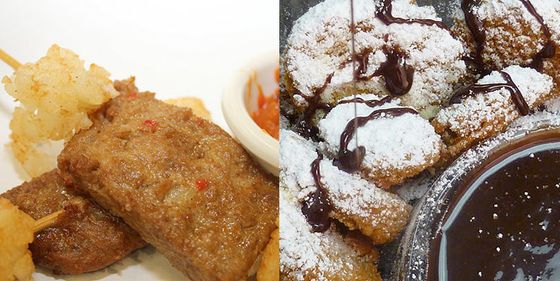 Can you spot the pickles?Photo: Minnesota State Fair

“Where were you when you first found out that someone realized they could batter meatloaf, fry it on a stick, and serve it with a red-pepper-and-Minnesota-wine glaze?” Someday, maybe, your children will ask you this question.

It took a briny nine years for legendary Minnesota State Fair vendor the Perfect Pickle to sell its millionth fried chip. That was a few years ago, and now the masters of innovation return with a new batch that is not only dusted with powdered sugar but served with a mini-sauna of hot chocolate for dipping. 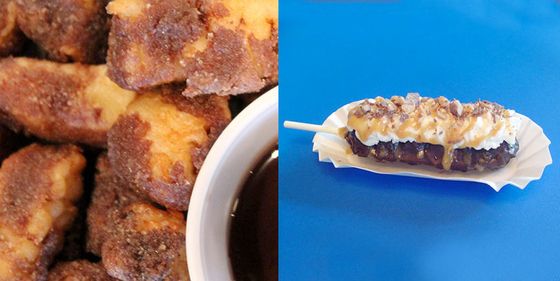 Perennial vendor Axel’s ups the ante with crushed cocoa-puff-breaded Wisconsin cheddar cheese nuggets. These nuggets, too, shall be dunked in hot chocolate sauce.

Considering the business is called Granny’s Kitchen Fudge Puppies and there’s a real granny who persevered through torrential rain, windstorms, and even a blizzard all in order to serve forced-air-baked chocolate-covered Belgian waffles to the people for decades, the English toffee triple threat is a must-eat. (No actual puppies were harmed in the making of this English-toffee Fudge Puppy.) 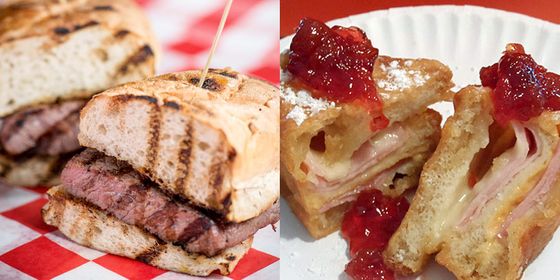 Mancini’s al fresco steak sandwich seems like a regular steak sandwich, but consider the fact that every last bit of its surface area has grill marks on it and you realize how dedicated these people are.

The sandwich is traditionally pan-fried, sure, but why not prove your love by going all the way with one that’s taken a hot oil bath, been given a fine dusting of powdered sugar, then be-dolloped with raspberry jam. Don’t be a chicken. 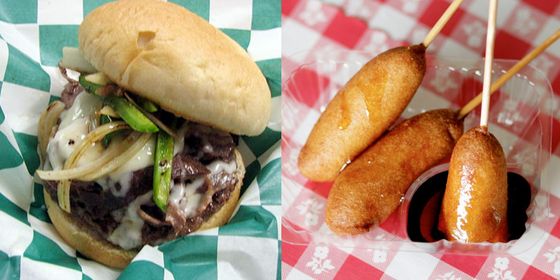 You get a quarter-pound hamburger and Philly steak, onions, peppers, and a mix of melted American and Swiss. It’s really the best of both worlds.

The batter is pancake, the sausage is link. The sauce is maple-flavored. That is all. 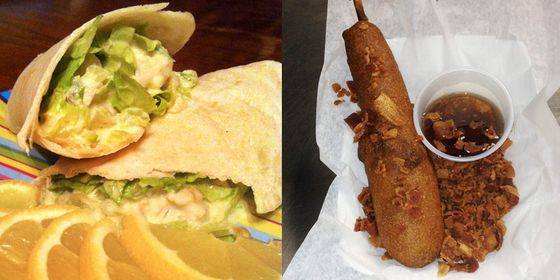 Don’t take away this fajita’s right to call itself a fajita.Photo: Minnesota State Fair

Don’t be fooled by the sliced orange. Or the presence of walnuts, Craisins, and apples. And chicken salad. This is a fajita.

Honorable mentions: The Idaho taco, a Tex-Mex showstopper that replaces the tortilla with a russet potato; Philly fries, where the bread found on a cheesecake sandwich has given way to waffle fries; Cajun pork rinds served with Alabama-White barbecue sauce; fried bread pudding; fried olives; and much, much more.

openings Yesterday at 10:53 a.m.
At Pecking House, the Line Is Finally Manageable You don’t have to wait for New York’s hottest fried chicken anymore.
By Chris Crowley
openings Sept. 19, 2022
Urban Hawker Brings Singapore to Midtown Inside the new food hall, which features 11 vendors from the island nation.
By Mahira Rivers
best in class Sept. 16, 2022
11 of the Very Best Air Fryers Custard toast at the ready.
the grub street diet Sept. 16, 2022
Karen Chee Is Looking Forward to Her Morning Egg “Peeling the shell is like unwrapping a gift.”
By Rachel Sugar
the year i ate new york Sept. 15, 2022
What’s Wrong With Cocktails Right Now? Bartenders and drinkers both seem a bit bored.
By Tammie Teclemariam
rip Sept. 14, 2022
RIP to the Wine Genius Who Created Two-Buck Chuck Fred Franzia had a way with words too.
gifts they might actually want Sept. 14, 2022
The Best Gifts for Beer Lovers, According to Brewers and Beer Lovers Because you can do better than a novelty beer helmet.
openings Sept. 14, 2022
A Le Coucou Chef Has Taken Over at Manhatta Justin Bogle breaks down the technique on a dozen new dishes.
By Joshua David Stein
report Sept. 12, 2022
Why Have Restaurant Menus Gotten So Simple? Call it the great pare-down.
By Chris Crowley
the grub street diet Sept. 9, 2022
Emma Steiger Eats Dinner at 3:30 — and Again at 10:45 “Even when we ordered, we knew it was too much food.”
By Alan Sytsma
reopening Sept. 8, 2022
Great N.Y. Noodletown Makes Its Triumphant Return A long-delayed reopening has finally happened.
By Chris Crowley
rsvp Sept. 7, 2022
What It’s Really Like Inside a Blindfolded Dinner “The customer is really surrendering to the chef — it’s a lot of trust.”
By Megan Paetzhold
cooking Sept. 6, 2022
The Dinner Party Is Over No more cleaning up.
By Emily Sundberg
the grub street diet Sept. 2, 2022
Galen Druke Has Been Getting Into Protein Shakes “This is probably the most embarrassing part of my diet I’ll admit to, so I might as well get it out of the way up front.”
By Zach Schiffman
the year i ate new york Sept. 1, 2022
Pretending to Vacation in Bushwick Reliving my early 20s during the last unofficial week of summer.
By Tammie Teclemariam
commentary Aug. 31, 2022
Should You Still Pay For Dinner If You Were Robbed While You Ate It? An etiquette question for the age of outdoor dining.
fall preview 2022 Aug. 29, 2022
The New Restaurants You Need to Know About So many openings.
By Alan Sytsma
the grub street diet Aug. 26, 2022
Morgan Jerkins Buys Her Snacks Before the Edibles Hit “Who wants to walk around the corner when you’re really stoned?”
By Alan Sytsma
openings Aug. 25, 2022
A New Chophouse Is Opening in Brownstone Brooklyn Gus’s debuts next week in Carroll Gardens.
By Andrea Strong
the year i ate new york Aug. 24, 2022
Where to Eat (or Get a Massage) in Flushing If you’re taking the train to watch the U.S. Open, you may as well have a decent meal too.
By Tammie Teclemariam
More Stories