Chef Daniel Burns, who innovated with various lactobacilli and spores at Momofuku’s fermentation-centric test kitchen and previously ran the pastry program at Noma, has finally got his Danish modern nook in order at the back of Tørst on Manhattan Avenue in Greenpoint. Luksus has been in friends-and-family mode during the last week, and online reservations for the 26-seat tasting-menu-based restaurant are already fairly booked. There are, however, lots of reasons why you may want to grab your seat now.

The menu, served Tuesdays through Fridays, is $75, with an eclectic $45 beer pairing devised by Evil Twin brewer Jeppe Jarnit-Bjergsø and the Tørst team. Following the format served at restaurants like Mugaritz and Atera, the meal begins with three snacks, followed by four main dishes. The opening menu includes a salad made from little gem or baby romaine lettuce roasted with the roots intact, which is served with egg yolk, roasted mushrooms, and pea broth. 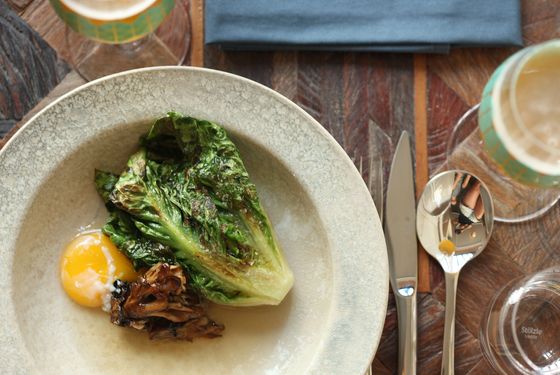 Another main is lamb breast that has been marinated and tenderized in a slurry of yogurt and burnt hay ashes. “We cook it really slowly at first,” says Burns, “but when it’s grilled, all of the milk solids caramelize in the pan.” It’s served with roasted sunchoke purée and marble potatoes dressed with thinly sliced lamb’s tongue and cut wax beans. “It’s sort of like a take on a potato salad,” Burns says.

Sweeter courses include a composed dessert of “super-light” rhubarb mousse, beet purée, pickled beets, and beetroot meringue, served with a quenelle of pea and anise-hyssop sorbet. Burns is baking the restaurant’s sourdough in house, based on a recipe he created after talking to Melissa Weller, the former Roberta’s baker who’s now making excellent bagels under the name East River Bread. “We use a poolish that sits overnight,” Burns says, “with a smaller amount of fresh yeast. It doesn’t leaven quite as much, but it has a fantastic crust.”

Danish artist Eske Kath painted a blackboard mural, adding a little color above the seating area, and keeping with the the restaurant’s Nordic roots, Burns plans to host guest chefs from Denmark in about a year’s time. “It’ll be a really a great opportunity to see what’s going on in Copenhagen without having to fly there,” he says.

Earlier: Tørst Opens Tomorrow in Greenpoint — and Beer Lovers Should Start Getting Psyched
Earlier: Tørst Team Will Open the 26-Seat Luksus Restaurant in May

A Look at Luksus, Opening July 16 in Greenpoint

presentation 25 mins ago
The New Minimalism Chefs are leaning into spare, simple presentations.
By Chris Crowley
rip Yesterday at 12:45 p.m.
Alain Sailhac, a Chef’s Chef to the End, Has Died “He knew it all.”
reasons to love new york Yesterday at 8:00 a.m.
The Best Pizza in the World Can Be Found in One Square Mile of Williamsburg Any neighborhood would be lucky to have even one or two of these places. Here are eight.
reasons to love new york Yesterday at 8:00 a.m.
Margaritaville Is the Chillest, Cheesiest Place in Town It’s bright, cacophonous fun.
By Rebecca Alter
reasons to love new york Yesterday at 8:00 a.m.
We Will Wait a Very Long Time for a Suprême The latest and arguably greatest entry in New York’s croissant craze.
the grub street diet Dec. 2, 2022
Andy Baraghani Likes Some Lumps in His Potatoes “This recipe has three kinds of dairy — labneh, cream, and butter — which I don’t think is overkill.”
By Alan Sytsma
the year i ate new york Dec. 1, 2022
Chocolate and Cheese in the Bronx A post-Thanksgiving trip to Chocobar Cortes.
By Tammie Teclemariam
report Dec. 1, 2022
How New Yorkers Are Saving, Swapping, and Splurging on Groceries “You gotta close your eyes and put it in the cart.”
By Paula Aceves and Jane Starr Drinkard
moving Nov. 30, 2022
The Famously Tiny I Sodi Is Moving to Bigger Digs Rita Sodi’s beloved little dining room will move — and finally get a bit bigger.
openings Nov. 29, 2022
The Many Influences of Kwame Onwuachi The chef puts his own history on the menu at Tatiana.
By Tiffany Martinbrough
best in class Nov. 28, 2022
11 of the Very Best Air Fryers Custard toast at the ready.
feature Nov. 28, 2022
This Tasting Menu Tastes Like Pot A cross-country dive into high-flying, super-high dollar cannabis cuisine.
By Adam Platt
emergency discussion Nov. 22, 2022
The Menu Gets That Fine Dining Is a Cult Obscure location, insufferable clientele, and staff at the end of their rope — this horror-comedy’s got a lot in common with reality.
By Chris Crowley and Adam Platt
holiday gifts 2022 Nov. 21, 2022
The Best Gifts for Beer Lovers, According to Brewers and Beer Lovers Because you can do better than a novelty beer helmet.
profile Nov. 21, 2022
Scarr’s Pizza Is Expanding — and Adding a Sushi Counter How Scarr Pimentel became Orchard Street royalty.
By Tammie Teclemariam
the grub street diet Nov. 18, 2022
Jeremiah Moss Wishes Arturo’s Would Open Earlier “I feel like I’m betraying myself somehow when I eat nice food.”
By Alan Sytsma
the year i ate new york Nov. 17, 2022
Where to Watch the World Cup Our diner-at-large goes looking for that perfect 5 a.m. sports bar.
By Tammie Teclemariam
closings Nov. 15, 2022
Good-bye to Pearl, the Oyster Bar That Launched a Million Lobster Rolls “A perfect storm” of calamities led to the restaurant’s closing, according to owner Rebecca Charles.
By Steve Garbarino
openings Nov. 14, 2022
The Race to Finish Rockefeller Center’s Restaurants A handful of ambitious new spots are all vying for the attention of, well, everyone.
By Chris Crowley
the grub street diet Nov. 11, 2022
Margo Price Stops for Tacos in Texas and Katz’s in New York “Tonight we might get stoned and go eat a hot dog.”
By Alan Sytsma
More Stories