The Daily Mail came across a Twitter photo of a fried-chicken restaurant in Thailand that featured a stern-looking Adolf Hitler wearing a Colonel Sanders outfit instead of a Nazi uniform as its mascot. Its name: “Hitler,” as in Hitler Fried Chicken. The fast-food place even mimicked the red and white colors of KFC’s logo.

The paper quotes a Thailand resident, who says the restaurant opened last month (the chicken is “pretty good”), and, of course, representatives of Yum! Brands were quick to point out that they were going to sue the place in a fast and furious manner, like Vin Diesel would were he a corporate lawyer. There has been something of a documented, bizarre “Nazi chic” cultural movement in Thailand recently; the only problem is that the Mail’s photo of Hitler Fried Chicken was taken in 2011, then found last month on Facebook by writer Andrew Spooner, who spent the better part of his weekend explaining that he didn’t own the restaurant or take the photo in question.

Very bizarre Hitler Fried Chicken shop in Thailand. I kid you not. Complete with pic of Hitler in bow tie http://t.co/9OS1FgfUCx— Andrew Spooner (@andrewspoooner) May 28, 2013

What’s more is that the restaurant is in Ubon Ratchathani, not Bangkok, the Post reports. And it ditched the Hitler motif a while ago. Now it looks like this. 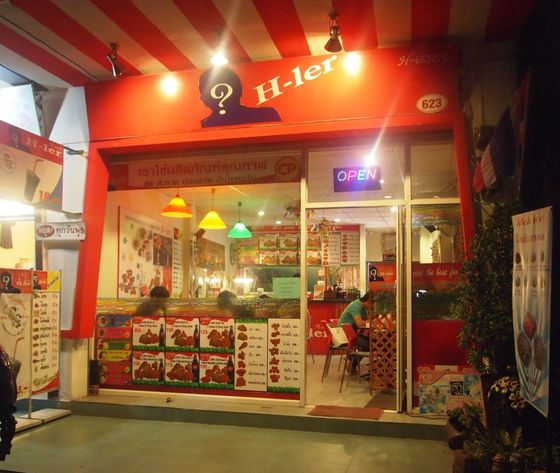 Its name, as of two years ago? H-ler Food and Drink. The imprint of genocide may linger, but the dictator’s face has been blacked out and replaced with a single question mark. If Facebook is any indication, it looks like the place does a brisk trade in ice-cream bars.

gifts they might actually want 11:00 a.m.
The Best Gifts for Beer Lovers, According to Brewers and Beer Lovers Because you can do better than a novelty beer helmet.
field notes 8:00 a.m.
The Tin Building Has Everything (Except a Purpose) Jean-Georges Vongerichten’s lovely but lifeless $200 million food hall.
By Adam Platt
the grub street diet Jan. 27, 2023
Sylvan Esso’s Amelia Meath Wants the Weird Appetizers “If there’s a bad app, I’ve gotta try it.”
By Alan Sytsma
the year i ate new york Jan. 26, 2023
The Hotpot Haze of Haidilao A steamy, celebratory feast in Flushing.
By E. Alex Jung
news Jan. 25, 2023
Here Are the Semifinalists for the 2023 James Beard Foundation Awards New York is well represented by Department of Culture, Kru, and more.
groceries Jan. 25, 2023
Welcome to the Shoppy Shop Why does every store suddenly look the same?
By Emily Sundberg
the underground gourmet Jan. 23, 2023
Now Is the Time for Trini Roti The Caribbean staple is a perfect midwinter lunch.
By Tammie Teclemariam
the grub street diet Jan. 20, 2023
Kashana Cauley Will Drive an Hour for the Right Yogurt “I believe in good yogurt more than other people believe in God.”
By Zach Schiffman
conversations Jan. 18, 2023
The Rush to Call Fine Dining’s Death Does Noma’s closing announcement really mean other restaurants are doomed?
By Chris Crowley, Alan Sytsma, and Tammie Teclemariam
top story Jan. 17, 2023
Restaurant Workers Are Paying to Keep Their Own Wages Low The National Restaurant Association lobbies Congress to keep the minimum wage low. Revenues from food-safety courses help pay for that.
the underground gourmet Jan. 16, 2023
Where to Find the City’s Best New Soup Elaborate broth is back.
By Tammie Teclemariam
the grub street diet Jan. 13, 2023
Highsnobiety’s Willa Bennett Is Thinking About Her Overnight Oats “I’ve never tried to make the oats while I’m away. It wouldn’t be the same.”
By Zach Schiffman
best in class Jan. 12, 2023
12 of the Very Best Air Fryers Custard toast at the ready.
the year i ate new york Jan. 12, 2023
In Search of the New York Happy Meal Our new diner-at-large looks for the best place to enjoy a martini and fries.
By E. Alex Jung
first taste Jan. 11, 2023
Gjelina Is Already Manhattan’s Hottest Lunch Seven years after it was first announced, the Venice Beach import is finally open.
By Alan Sytsma
closings Jan. 9, 2023
The End of Noma As We Know It René Redzepi is closing his Copenhagen restaurant at the end of 2024.
By Alan Sytsma
the grub street diet Jan. 6, 2023
Planet Money’s Jack Corbett Loves a Sale at the Grocery Store “I’m a bargain shopper, aside from my $18 pine nuts.”
By Zach Schiffman
rip Jan. 4, 2023
Chef King Phojanakong Has Died The founder of Kuma Inn was 54.
feature Jan. 3, 2023
Can Tacombi Become the Next Shake Shack? With a major investment from Danny Meyer, founder Dario Wolos is thinking big.
By Rachel Sugar
year in review Dec. 22, 2022
Grub Street’s 20 Most-Read Stories of 2022 Long Island bagels, dirty martinis, messy chef romances, and more.
By Grub Street
More Stories