“This will never be a cronut shop!” says Dominique Ansel, looking slightly overworked but still smiling at 8 a.m. His namesake Spring Street bakery has sold out of the inventive, now-world-famous half-doughnut, half-croissant rose-glazed cronuts every day since their May 10 debut. Grub Street had the very first look at the cronut just before its initial release earlier this month, and now, as promised, the flavor will switch on Saturday morning, from rose-vanilla to lemon-maple for the month of June. Get a closer look at the new cronut, straight ahead. 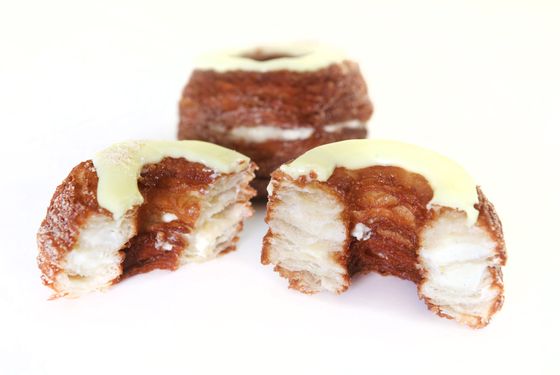 This time around, the cream filling is “very light,” Ansel says, and is made with fresh zest. It’s fragrant but not tart. Once it’s out of the fryer, the cronut is rolled in coarse maple sugar. Ansel says the pastel lemon glaze is lighter.

Some cronut talking points (and purchasing strategies), for the uninitiated:

• The line starts forming outside the Spring Street bakery every morning after 6 a.m. and is often 30-deep by the time the bakery opens at 8 a.m. If you show up around 7:15 a.m., you should be guaranteed a cronut. The wait’s not that bad: Ansel and his staff have taken to handing out free warm madeleines and coffee samples to customers.

• The bakery has officially produced 200 cronuts a day for the last twenty days, but considering presales, Ansel estimates he has made 5,000 cronuts total. Production remains labor intensive, but the bakers say the price will remain $5.

• Cronut scalping, Bloomberg critic Ryan Sutton points out, is a real thing. Prices vary by destination, but it costs $200 to have someone wait in line, pick up five cronuts, then deliver them to Brooklyn, for example. (The delivery person keeps one cronut as a sort of surcharge.)

• If you are a celebrity, you still have to wait in line like everyone else. Anderson Cooper tried to get a special order for his birthday, but was denied owing to the ongoing demand from the public. Hugh Jackman, however, has allegedly waited in line for a cronut.

• Ansel says he’s “staffing up” to keep up with demand. In the meantime, the bakery sells 30 other items, which have their own devoted fan bases. (Try the Kouign Amann.)

best in class Yesterday at 1:24 p.m.
15 of the Very Best Water Bottles Always be hydrating.
By Emma Wartzman
are u coming? Yesterday at 1:00 p.m.
Richie Akiva Is No Longer the King of Nightclubs, Okay? His post-pandemic move: a celebrity-packed … members-only club.
By Brock Colyar
the grub street diet Yesterday at 6:00 a.m.
Bobby Finger Is Excited to Eat Indoors Again “Put me as close to people as possible. Put me at the bar. Put me behind the bar.”
By Rachel Sugar
openings Sept. 22, 2022
Eisenberg’s Enters Its A24 Era The name is new, the counter is old, and a Safdie brother is now involved.
By Jason Diamond
the year i ate new york Sept. 21, 2022
Who Are All These People Eating on DeKalb? It might be the most confusingly busy restaurant stretch in the city.
By Tammie Teclemariam
openings Sept. 20, 2022
At Pecking House, the Line Is Finally Manageable You don’t have to wait for New York’s hottest fried chicken anymore.
By Chris Crowley
openings Sept. 19, 2022
Urban Hawker Brings Singapore to Midtown Inside the new food hall, which features 11 vendors from the island nation.
By Mahira Rivers
best in class Sept. 16, 2022
11 of the Very Best Air Fryers Custard toast at the ready.
the grub street diet Sept. 16, 2022
Karen Chee Is Looking Forward to Her Morning Egg “Peeling the shell is like unwrapping a gift.”
By Rachel Sugar
the year i ate new york Sept. 15, 2022
What’s Wrong With Cocktails Right Now? Bartenders and drinkers both seem a bit bored.
By Tammie Teclemariam
rip Sept. 14, 2022
RIP to the Wine Genius Who Created Two-Buck Chuck Fred Franzia had a way with words too.
gifts they might actually want Sept. 14, 2022
The Best Gifts for Beer Lovers, According to Brewers and Beer Lovers Because you can do better than a novelty beer helmet.
openings Sept. 14, 2022
A Le Coucou Chef Has Taken Over at Manhatta Justin Bogle breaks down the technique on a dozen new dishes.
By Joshua David Stein
report Sept. 12, 2022
Why Have Restaurant Menus Gotten So Simple? Call it the great pare-down.
By Chris Crowley
the grub street diet Sept. 9, 2022
Emma Steiger Eats Dinner at 3:30 — and Again at 10:45 “Even when we ordered, we knew it was too much food.”
By Alan Sytsma
reopening Sept. 8, 2022
Great N.Y. Noodletown Makes Its Triumphant Return A long-delayed reopening has finally happened.
By Chris Crowley
rsvp Sept. 7, 2022
What It’s Really Like Inside a Blindfolded Dinner “The customer is really surrendering to the chef — it’s a lot of trust.”
By Megan Paetzhold
cooking Sept. 6, 2022
The Dinner Party Is Over No more cleaning up.
By Emily Sundberg
the grub street diet Sept. 2, 2022
Galen Druke Has Been Getting Into Protein Shakes “This is probably the most embarrassing part of my diet I’ll admit to, so I might as well get it out of the way up front.”
By Zach Schiffman
the year i ate new york Sept. 1, 2022
Pretending to Vacation in Bushwick Reliving my early 20s during the last unofficial week of summer.
By Tammie Teclemariam
More Stories